Another layer of the social fabric: Kosovo’s hijabi women

Conversations with Muslim women who wear the hijab about their experiences of stigmatization in Kosovo’s social and institutional spheres.

Sumeja Kqiku always dreamed of studying medicine and becoming a pediatrician. But her enthusiasm was cut short in 2015 when she appeared at the Faculty of Medicine in Prishtina with an application in her hands and a hijab on her head.

Even though it is not illegal to wear religious attire in public institutions of higher education in Kosovo, one of the administrative employees immediately refused to accept her documents when she approached his desk.

Over the course of two months, I met with nine Muslim women, and they shared their stories about what it is it like to experience social and institutional life in Kosovo as women who wear the hijab.

Practicing religion is a constitutionally protected right in Kosovo, but women who wear hijab often face social stigma, which is intricately intertwined with debates about secularity and modernity in the country. Like other secular states such as France, Kosovo too has banned the hijab in public primary and secondary education. However, religious attire is legally protected in universities and in the workplace.

Yet based on the personal stories that these women shared with me, in reality, Muslim women face targeted discrimination from institutions as well as in social life. In the face of social stigma, some women decide to strengthen their ties to the Islamic community and to other hijabi women (hijabi translates from Arabic to my headscarf and is often used within the community to refer to women who observe the hijab).

For Kqiku, she felt that her best option was to join the Faculty of Islamic Studies, a space that, she said, welcomed her and provided her with an opportunity for education. Along with her studies, she currently works as a makeup artist in a beauty salon. 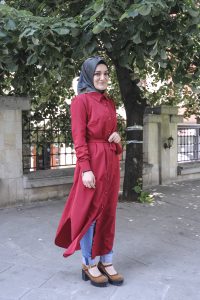 According to Besa Ismaili, Vice Dean and professor at the Faculty of Islamic Studies, hijabi women are discriminated against in the same ways as other women in Kosovo. But, according to her, religiously devout Muslim women face an additional difficulty – that of social and institutional stigma towards their hijab.

“Hijabi women in Kosovo face the same challenges that other groups of women in Kosovo face – be it domestic violence or exclusion from inheritance rights, unemployment or poor reproductive care,” Ismaili, who herself chooses to wear the hijab, told me at her office in the Faculty of Islamic Studies. “[But] the hijab is an additional layer that affects the women who choose to represent themselves religiously and culturally.”

Although the majority of the population is Muslim, Kosovars are often described as secular and even reluctant practitioners of traditional Islam. There are no statistics on preferences for religious attire in Kosovo, but there seems to be a general hesitancy towards the hijab.

This may be rooted in the country’s historical background: after the Second World War, in an attempt to emancipate and empower Albanian women in Kosovo, the Communist Party of Yugoslavia organized ‘mass actions’ for the removal of the carshaf (veil) in the early 1950s.

Today, according to the women I spoke to, the general public assumes that the hijab represents oppression, illiteracy, and powerlessness.

Blerina Nazifi, who is from a secular family, told me about how her choice to wear the hijab was confusing for her own family.

Although Nazifi did not attend a madrassa school–a Muslim high school that teaches the regular state curriculum in addition to classes on religion–she has been interested in religious studies since the 9th grade. She read the Bible, the Quran, and a number of philosophy texts, she said, and found the most personal meaning in her studies of Islam.

Ever since I was little, I’ve always been more of a rebel. I’ve raised my voice, spoken out and expressed myself. Blerina Nazifi

Her decision to wear the hijab was difficult because her family, who believe in God but do not practice any religion, did not support her choice. Her uncle has not spoken to her since.

Nevertheless, the rejection did not cause her to change her mind.

“Ever since I was little, I’ve always been more of a rebel. I’ve raised my voice, spoken out and expressed myself,” she said.

Arbnore Avdiu Hoxha, international news editor at media platform mesazhi.com, said a major driving factor for discrimination against hijabi women in Kosovo is the belief that wearing it is not a personal choice.

“In most European countries, hijab is considered a personal choice, a religious right, and a personal right of women to do whatever they want with their bodies. This is the viewpoint that one should take in regards to hijabi women in Kosovo as well,” she argued. 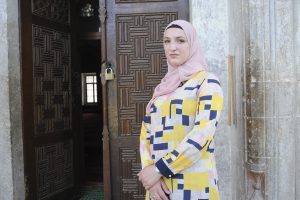 Some of the women I spoke to insisted that negative perceptions of the hijab are reinforced by depictions of Muslims in local media, and that Islam is conflated with violent extremism.

The international media has also depicted the Islamic community in Kosovo negatively, with one of the most discussed cases being the 2016 New York Times front page article that called Kosovo “fertile ground for ISIS.”

A publication about citizens’ views on violent extremism and radicalization by Kosovo Center for Security Studies, KCSS, shows that about 76 per cent of people feel directly threatened by extremist organizations such as ISIS and Al-Nusra.

Nura Kukaj, a student at the Faculty of Islamic Studies, said that she is used to being called ‘ISIS’ by children on the streets, as well as from men and women in public spaces. Once, she said, she offered her seat to an older man on the bus, who in turn replied, “no, I do not sit next to ISIS.”

Such depictions of Muslims, when combined with institutional discrimination, may result in more than stigmatization, argued Ismaili. According to her, they contribute to further disempowerment of women, paving the way for women to make uninformed decisions or to be abused.

“Note the profiles of those joining their husbands in terrorist missions in Syria, and you will understand. They are young, stigmatized, uneducated, lacking family as well as social and institutional protection,” said Ismaili.

Over 40 Kosovar women have left for Syria and Iraq since 2013, but a 2017 report by the KCSS claims that there is no single cause, or a single type of woman who left for foreign conflicts zones.

For several of the women I spoke to, some of the most memorable experiences of stigmatization happened at school. Like for Sumeja Kqiku, who was told that the University of Prishtina’s faculty of medicine was ‘not for her,’ the experience of being othered often occurs in educational settings. 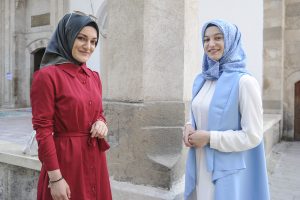 Hatixhe Aliti loved math in primary school and she cherished how her math teacher respected and supported her. But the moment that he was informed that she will continue her high school education in a madrassa, everything changed. He no longer treated her as his favourite bright math student.

Fitesa Asllani Ibrahimi from Mitrovica, who works at a public enterprise in Prishtina, shared a story about a debate she engaged in with one of her professors at the AAB college, where she studies economics. She recounted a lecture in which the class was debating religion and diversity, and her professor told her, “I respect you, because you too are part of this society.”

Despite this memory of feeling othered (albeit a lighthearted one), she confidently said that she does not feel discriminated against or judged by her colleagues at work for her hijab. “I also don’t feel judged by people when I’m walking down the streets,” she emphasized, adding that she also feels comfortable living in Prishtina.

Another woman I spoke to, Fatime Sopjani Mejzini, shared similar experiences of feeling stigmatized at school, but overall feeling comfortable in her social sphere. 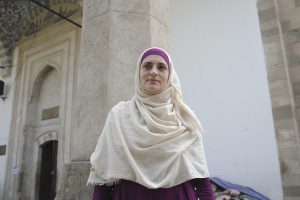 She faced criticism the moment she decided to put the hijab, she said. She told me about one of her professors, who she described as a friend. “He seemed very shocked when he first saw me wearing a hijab, but I offered to buy him a cup of coffee and talk so he can see that I am still the same person.”

Mejzini is a driving instructor in Prishtina, an uncommon profession for women in Kosovo, and she says that she loves her job. She sharply noted that she feels lucky that her position mostly involves working with people and less with institutions; she believes that the institutional intolerance towards hijabi women is stronger than the social stigma.

Rovena Tujani Klinaku, a lawyer from Albania living in Kosovo, agrees that there is systemic institutional discrimination in Kosovo. According to her, very few hijabi women are employed in public institutions, and they are often assigned to offices without much contact with people. But similar criticisms can be made about private universities, she said. 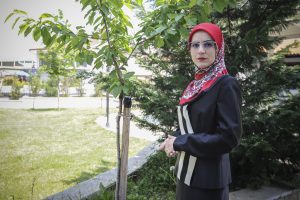 “When it comes to higher education, for instance, private universities come up with all these slogans on non-discrimination and inclusive policies. They want to make money, of course,” said Klinaku, adding that upon graduation, even her alma mater did not welcome hijabi women.

“When you apply for an assistant position and even when you fulfill the criteria, your chances as a hijabi woman are minimal. The same rector that welcomes you to join the institution, insisting on equal treatment, ends up telling you that they cannot employ you, despite the fact that you have been the best student of the generation.”

Feminist activists must understand once and for all that religion, for women like me, is very empowering. Besa Ismaili

According to Besa Ismaili, women’s civil society groups in Kosovo also discriminate against Muslim women. She said that this was especially revealed when a group of women in civil society, intellectuals, and politicians presented a petition in parliament to prohibit girls with hijabs to go to schools.

“Women’s feminist activism in Kosovo is a donor sponsored activism, not a grassroots one that takes into account the backgrounds, needs, and challenges of hijabi women in Kosovo,” she said. “It is disappointing to see Islamophobic elements in their discourse, which often blames patriarchy on Islam itself. Feminist activists must understand once and for all that religion, for women like me, is very empowering.”

The women I spoke to said that part of the solution to discrimination is to push for media depictions of women that simultaneously show the community as diverse, but no different than the diversity of women overall.

Avdiu Hoxha said that hijabi women in Kosovo are excluded from the public sphere, and that the media reduces them to their religious identity and thus hinders them from participating actively in debates on politics, economy, and society.

“It is important for hijabi women to be visible in Kosovo’s public space as professionals, be that as doctors, businesswomen, teachers, or whatever their profile might be. After all, the debate on justifying why we wear hijabs is of lesser importance,” she said.

“Hijabi women in Kosovo have no more or less values than any other Western or Eastern woman. We face the common challenges that most women face: that of balancing family-career life as well as other things we wish to devote our time to.  And just like other groups of women in Kosovo, we have stories to tell, success stories as well.”

Being a black woman in Kosovo

by Bronwyn Jones
Next: News