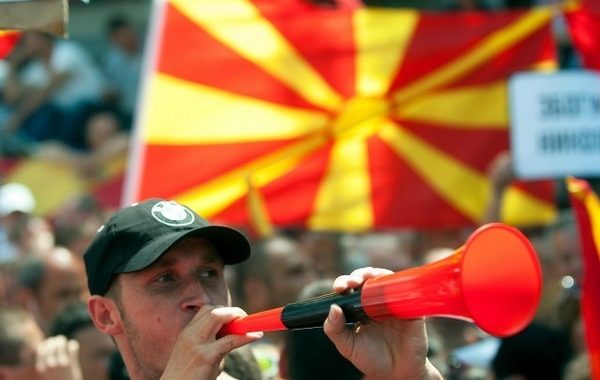 Social justice as a way out of ethnic trade-offs

The crisis that erupted out of the Macedonian government’s practice of corruption and undemocratic rule is now reconfiguring itself into a crisis of ethnic blackmailing.

What has been called ‘the deepest political crisis’ since the independence of the country has resulted in an all-out crisis of legitimacy. After the EU-brokered Przino Agreement of 2015, that aimed at resolving the political crisis in the country, the elections that were postponed twice,  finally took place on December 2016. The results did not provide a clear majority for any of the main political parties, thus opening the space for a new round of political “games.”  But, the attempts to establish a government coalition in Macedonia remain a small step towards the more serious challenges to restore democracy and legitimacy of the state institutions.

The claims of a captured state made by several researchers and activists were finally confirmed in the last European Commission Country Report. The independence of the judiciary, freedom of the press, the crony economy, the dysfunctional parliament and an errant president, as well as a politically corrupt deep state, are all issues that will take years to address before we see some positive progress.

Nikola Gruevski’s decade-long distinctive authoritarian model of governing has depleted most of the democratic potential of institutions. On the other hand, the state repression often encouraged massive civic mobilization initiatives that kept the society vigilant on the degrading democratic and social standards in the country. A new government coalition led by Gruevski, who formally won last December’s general elections by a very tiny margin of only two MPs, would only deepen and harshen the crisis. His attempt to negotiate a coalition with Albanians (his long-standing coalition partner – Ali Ahmeti of the Democratic Union for Integration, DUI ) failed. If it had succeeded, it would immediately face a renewed wave of protests and contestations.

The democratic process of elections does not always lead to democratic rule of the elected government. There are currently several countries in Europe and elsewhere that have authoritarian governments. But in Macedonia, the Albanian parties hold the key to revert such a failure of the democratic process and the ability to enable a process of serious reforms in the country. And, instead of focusing on this tactical advantage they had, we witnessed the Albanian political parties sign a declaration that did not mention reforms, but only presented a list of demands, which apart from the extension of the use of the Albanian language, are either completely out of touch with reality or only symbolic.

One way of interpreting such a move by the Albanian parties is to see it in the context of ‘break-away’ votes that went to the Social Democrats, or SDSM. The Albanian vote for a Macedonian political party represents a serious break with the traditional ethno-centric political identification of communities in Macedonia. It signaled that the Albanians calculated that their votes against Gruevski would have more weight if they were cast for the Macedonian opposition.

Currently, there are ongoing negotiations between Zoran Zaev’s Social Democrats and the two major Albanian parties, DUI and BESA. If a new majority is confirmed without Gruevski, this would mean a new cycle of instability in the country. The leadership of VMRO would be facing investigations and possibly charges for serious violations, which the party will try to avoid at any cost. It will inevitably lead to an aggressive nationalistic appeal by VMRO to its constituency, under the pretext that the Albanians have violated the unwritten agreement that both the winners of the two ‘ethnic blocs’ form a coalition by default. They will claim that the will of the Macedonian voters has been neglected, both by the opposition and the Albanians.

This possible scenario has put a lot of pressure on Ahmeti’s shoulders, who has traditionally given priority to the stability of the country above everything else. This is why he might prefer to spend more time without a new government coalition in place rather than swiftly closing a deal with the Social Democrats. He can even opt for new elections, coupled with the local ones set for May 2017. Until then, the current wide coalition government will continue to run the country without making any major decisions.

The crisis that erupted out of government practices of corruption and undemocratic rule is now reconfiguring into a crisis of ethnic blackmailing. Thus, the much-anticipated government that would deliver reforms, which could release the state from its captors, and enable a better political and social environment, is now increasingly the subject of ethnic trade-offs. Whatever the result of the negotiations and possible contestations is, one evident fact remains: in the Balkans, we are still unable to go beyond ethnically determined political references.

On the one hand, we have ethnic majorities which still consider their privileged position to be natural, ignoring injustice and inequality suffered by other minorities, and on the other hand, we have minorities which, as an effect of the predominant group, remain locked within ethnic agendas as the most important aspect of their political presence in the country. We will surely need more labor on the part of the non-formal political actors in order to move the society towards a new beyond-ethnic majority, one to which the political parties must respond. In doing so, the social movements will have to establish equality and justice as a starting point, not as a target of their social activity.

Artan Sadiku is a Program Director and a researcher at the Institute of Social Sciences and Humanities in Skopje, where he also teaches political philosophy and policy studies. He is also a member of the political organization Solidarnost from Skopje.