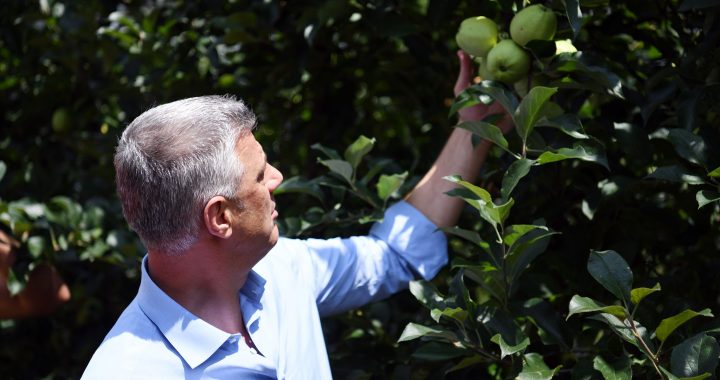 Territorial exchange is Thaci’s trick: don’t fall for it

The proposal to ‘correct borders’ is a smoke screen. Such a scenario won’t play well for President Thaci or President Vucic - they’d both lose the power they have over Kosovo.

Kosovo President Hashim Thaci has recently made remarks entertaining the idea of border changes between Kosovo and Serbia. In his schizophrenic manner, after proposing “border corrections” that would involve Presevo Valley joining Kosovo, he then insisted that there would be “no partition, no territorial swaps, and no autonomy,” only later to negate himself, saying that he could not be held responsible for what Serbia would ask in return. Thaci’s discourse took many by surprise. NGOs, current and retired Balkan commentators, domestic and international politicians, all rushed to take Thaci’s comments seriously. This is exactly what Thaci wanted, and he got it. If only they knew that Thaci’s proposal of “correcting borders” is just empty talk, serving his dubious political ends.

To change borders, the two parties (Kosovo and Serbia) need to be willing to do so. It is more than obvious that neither of the parties is willing. Serbia has a pretty good grip over Kosovo, something that might not be obvious to those overly obsessed with Kosovo’s daily politics. During the Brussels negotiations process, Serbia has managed to utilize the Ahtisaari Plan (Kosovo’s Constitution) to gain control over Kosovo politics, making the latter subservient to Serbia on many different levels. By establishing the Srpska Lista, now a political party with a monopoly over Serb politics in Kosovo, Serbia has managed to turn Kosovo Serbs’ veto power over crucial matters of the state into its own veto power over Kosovo.

Serbia’s veto power over Kosovo’s domestic politics became evident in several instances in the past, with the most recent case being the election of Ramush Haradinaj as Kosovo’s prime minister. Serbia had the then nominee for Prime Minister, Ramush Haradinaj, wait until the Srpska Lista returned from Belgrade to give him the news whether Belgrade agreed for him to be Prime Minister of Kosovo.

This is only a fraction of the sovereign powers that Serbia has managed to gain over Kosovo. Serbia controls the education system in Serb majority municipalities, and through the Ahtisaari Plan, secured its extraterritorial rights over Orthodox Church properties, amongst others. Through the 2013 Brussels agreement, it ensured that the position of the regional police director for the north would belong only to a member of the Serb community, despite the fact that the northern part of Kosovo is more multiethnic than the whole of Kosovo itself. The establishment of the Srpska Lista as Belgrade’s political satellite in Kosovo’s central and local institutions, a direct result of the Brussels negotiation process, made it further impossible for Kosovo to establish its own army without Belgrade’s consent.

With territorial changes, Serbia would gain full control over a fraction of Kosovo’s territory in the north, but would also risk losing the power it currently enjoys over the entire political life in Kosovo, spanning the whole territory. It is difficult to see why Serbia would risk losing this, and the many other powers, it has so diligently worked for over the entirety of  Kosovo, initially through the Ahtisaari Plan (which it did not accept), and later through the Brussels negotiations process.

But Thaci himself is in no position to call for border changes either. The outcome would be terrible for him. Any change of borders would further strengthen his staunch political opponent, the Vetevendosje movement. This is the last thing Thaci wants. If we are to take Vetevendosje even slightly seriously, they are very keen to have Thaci spend a lot of time in courtrooms and perhaps behind bars, should they come to power. No one knows it better than Thaci himself: he is Vetevendosje’s first target.

There is another aspect of Kosovo’s domestic politics that illustrates why Thaci is the last person who should want this to happen. Change of borders would most likely question Kosovo’s current constitutional setup and its existence as an independent state more than ever before. It would rationalize the voices calling for unification with Albania, and regardless of whether that happens, Kosovo’s border changes would  increase the legitimacy of Vetevendosje’s arguments, and would bring about complete collapse of Thaci’s political legitimacy, which he has managed to gain only through the current constitutional order. If Kosovo’s Constitution would have a face, it would be Thaci’s. Politically killing the current constitutional order of the country means to politically kill Hashim Thaci, and Thaci does not strike me as a person who would commit political suicide at such a young age.

At the same time, just looking at the international dimension of border changes exposes such a policy as unfeasible. I think there are not many people who would expect a change of borders to occur without the potential for conflict to erupt, and as a consequence, the incitement of mass violence and deportations in different states in the Balkans. I am not suggesting that conflict may start a day after borders are redrawn; it can happen months after, or it can happen as borders are being negotiated. A quick look into key EU member states’ politics would suggest that there is very little appetite in Europe for wars in its immediate neighborhood, which could open the gates for another migration wave to hit Europe. The current US administration, more or less disinterested in the Balkans, does not seem to be willing to head such a dangerous policy alone, a policy which can play well only for Russia at the moment.

Thaci’s territorial ramblings are a simple domestic political trick to trap political opponents into a discourse of inexistent border change policy. Thaci’s strategy is to create a sense of shock, to keep political opponents busy defending the state from an imminent yet inexistent threat, so that they do not attack Thaci on the real threat he is preparing for. My bet is that the real threat is the creation of the third (Serb monoethnic) layer of government as a separate entity, further endangering the functioning of the state and further strengthening the grip of Serbia over all of Kosovo. I am in no position to teach Serbs in Kosovo what is best for them; they know better than anybody else. I can only sense that both the policy of dividing Kosovo as well as the establishment of a Serb monoethnic entity may not fare well for them in the long run. Dividing Kosovo will leave the majority of Serbs in Kosovo who live in the south pretty much as second hand citizens, much like the Albanians in southern Serbia. The establishment of the Serb entity would have them further detached from Kosovo and ruled monopolistically by Belgrade through Srpska Lista, with no plurality of political choices in Kosovo.

With the discourse on territorial exchanges, Thaci wants to paradoxically claim victory while he establishes the Serb entity. He wants to show to the public that by establishing the Serb entity in Kosovo, he has done what his political opponents could never have – he has defended the borders of the state. I urge everyone not to fall into the trap of fearing Thaci’s inexistent scenario of border changes. Thaci is tricking his political opponents and the wider public. He has done this before, and he is doing it again. Thaci wants to transform himself from one of the most dangerous people for Kosovo and its future, into its defender. Don’t support this man by discussing what he wants everybody to discuss; instead we should discuss what his dangerous and dubious political ends actually are.