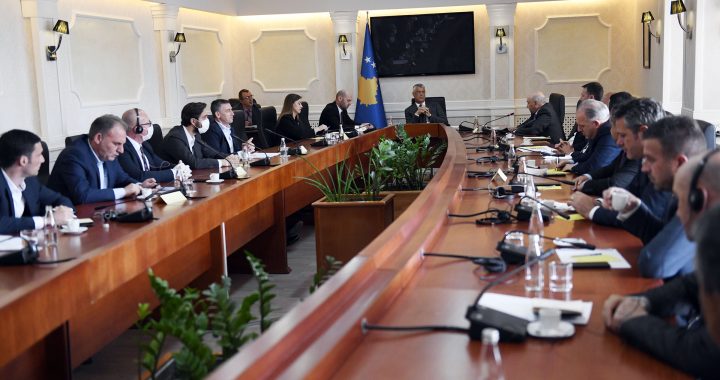 Thaci offers govt mandate to ‘whoever can command majority’

Following a meeting with party representatives on Wednesday, President Hashim Thaci offered the mandate to form Kosovo’s next government to whichever coalition can form a parliamentary majority.

Kosovo’s next government looks set to be formed without new elections, after President Hashim Thaci declared on Wednesday that he will offer a mandate to whomever can establish a parliamentary majority.

“I will give the mandate to any party or coalition that proves it has a majority in the Assembly,” Thaci said at the conclusion of a meeting between himself and leading figures from every political party represented in the Kosovo Assembly, which was live streamed for the public.

During the meeting, the president consulted with leaders to determine whether the parties wished for him to push forward with the formation of a new government or call extraordinary elections, following the motion of no confidence that passed against the government on March 25.

After calls for the creation of a new government from the majority of party representatives, Thaci stated that a new government would emerge based on the results of the parliamentary elections held on October 6, 2019.

Wednesday’s meeting followed an exchange of letters between Thaci and acting Prime Minister Albin Kurti. On April 2, Thaci requested that Kurti, as the leader of the political subject which received the most votes at October’s elections, provide a candidate to lead the next government.

However, Kurti has not complied with the request, triggering a series of follow up letters from the president. In a response to Thaci on April 17, Kurti stated that he was not refusing the president’s request, but was awaiting clarification from Thaci concerning why he was “trying to impose non-constitutional paths after the vote of no confidence.”

On Wednesday, Thaci wrote to express his regret that Kurti was yet to nominate a candidate and announced his plans to meet with party leaders to discuss further steps.

In a response, Kurti stated that Thaci does not have the mandate to determine how the government should be formed. He added that “with regret, we find that you have not yet answered us on the basis of which point of Article 95 you are acting and addressing us,” referencing the section of the Kosovo Constitution that sets out the process for the formation of the government.

Since the government’s dismissal, Kurti’s Vetevendosje has continually called for fresh elections to be held once the “conditions are created after the pandemic has passed.” This position was reiterated in Wednesday’s meeting with Thaci by the party’s representative, acting Minister of Justice Albulena Haxhiu.

Haxhiu also stated that Thaci’s approach contravenes the Kosovo Constitution and a Constitutional Court decision made in 2014, which gives the party that won the most seats in the Kosovo Assembly at parliamentary elections the right to be first to nominate a candidate to mandate the government.

Following the meeting, Haxhiu told the media that Vetevendosje would send any decision which overlooked the party as the winners of October’s elections to be reviewed by the Constitutional Court. “The president and a boy’s club are trying to overthrow the will of the people,” she said. “The constitution does not allow the president to take these actions.”

However, leading figures from the other parties represented in the Kosove Assembly all voiced support for the formation of a new government, including Isa Mustafa, the leader of Vetevendosje’s former coalition partner, the Democratic League of Kosovo, LDK.

“I can say on behalf of LDK that we believe that in these moments we should not go to the polls, and that we should make efforts to form a government which has a mandate from the Assembly of Kosovo and that can govern the country in a normal way,” Mustafa said, adding that the Assembly required “a government that can work at full capacity with a parliamentary mandate and communicates regularly with the Assembly on a legal and constitutional basis.”

Mustafa said that as the second largest party in the Kosovo Assembly, LDK is ready to take steps to form a new government, one which he told a press conference after the meeting “would have the capacity to deal with the current situation and the dialogue.”

On April 14, the LDK General Council voted in favour of the party attempting to form a government with the Alliance for the Future of Kosovo, AAK, and the coalition between NISMA and the New Kosovo Alliance, AKR. Earlier on Wednesday, Mustafa held a working meeting with AAK leader Ramush Haradinaj.

Representatives from AAK, NISMA, and AKR all stated at the meeting with Thaci that a new government should be formed, as did Kadri Veseli, the leader of the Democratic Party of Kosovo, PDK. However, Veseli insisted that PDK, the third largest party in the Assembly, would remain in opposition, and would refuse offers from any party to form a coalition government.

Parliamentary arithmetic would mean that a coalition government formed of LDK, AAK, NISMA and AKR would require the support of at least 14 MPs from parties representing Kosovo’s ethnic minorities.

At Wednesday’s meeting with Thaci, Goran Rakic, leader of the Belgrade-backed Lista Srpska that holds all 10 reserved seats representing Kosovo Serbs, stated that his party would support the formation of institutions.

All of the officials from other parties representing Kosovo’s ethnic minorities also voiced their support for the formation of a new government as opposed to holding new elections, including acting Minister for Local Government Emilija Redzepi.