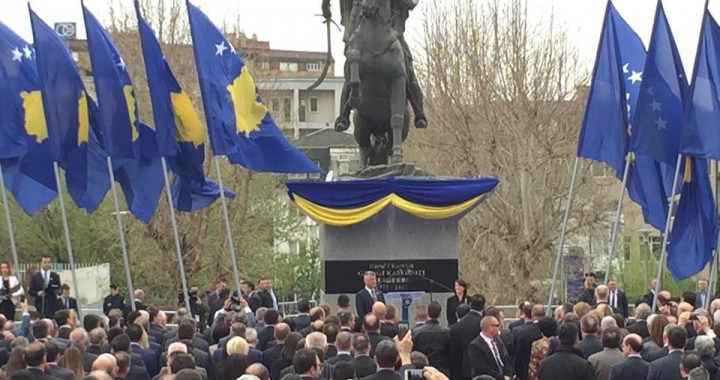 Over one thousand guests attended the presidential inauguration in Prishtina on Friday, April 8. Hashim Thaci, Kosovo’s former Prime Minister and Minister for Foreign Affairs, was welcomed as Kosovo’s new president in an unprecedented ceremony in the Skanderbeg square.

Before the ceremony sarted, tear gas was thrown by Vetevendosje activists on Mother Teresa boulevard, meters away from Skanderbeg square where the ceremony took place.

Several high-profile guests, including prime ministers and ambassadors attended the ceremony. Lines formed outside the government building where the police scanned everyone before they entered the ceremony.

Citizens who wished to participate in this ceremony were faced with the barricades that surround the square today. The ceremony was invitation only. Qazim Alia, a citizen who travelled to see the ceremony today says that this lavish ceremony should not have been planned because of the poverty in the country.

The ceremony started with departing President Atifete Jahjaga handing over a copy of the Constitution to the new President as a symbolic gesture.

Afterwards, Kosovo’s new president addressed the attendees and nation. During his speech, Thaci expressed his gratitude for the sacrifices that the Kosovo people have made through years.

“I am a common president to a nation of heroes,” he humbly declared. Thaci’s inauguration was not attended by MPs from the opposition parties as well as some of the members of the coalition partner the Democratic League of Kosovo (LDK). Thaci’s presidential election on February 26 was accompanied by tear gas and protests outside of the assembly.

“For the past 17 years we have been free, we will not lose any day, month or year in hatred, suffering and bloodshed,” said Thaci.

During the presidential speech, Thaci also discussed the Brussels-mediated dialogue between Kosovo and Serbia, saying that there was no alternative to this dialogue, which has brought “improvement of the relationships in the entire region.”

“There is no alternative to dialogue, we will cultivate good neighborly relations,” said Thaci.

After finishing his speech, President Thaci swore again that he would be the guardian of the Constitution, adding “God bless Kosovo and its friends.”

His speech was followed by a choir of children singing  “Imagine” by John Lennon, as the visibly-moved President Thaci teared up. The Kosovo Philharmonic Orchestra performed a few pieces, finishing with Kosovo’s national anthem.