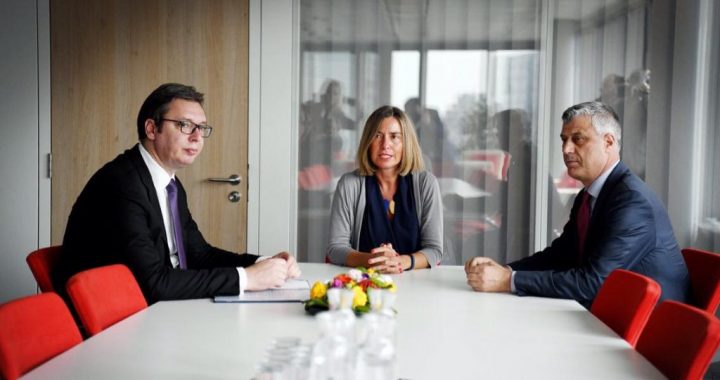 The hollow compromise of ‘border corrections’

Talks of partition and territorial exchange, facilitated by a weakly managed dialogue and support from undemocratic regimes, have found traction within the EU and now the Trump administration.

Talk of border “corrections”―a new euphemism for border changes ―has recently become attractive to Western policymakers, for lack of tangible alternatives. The Brussels talks between Kosovo and Serbia have been a lacklustre process in recent years, meandering without a clear idea, timeline or tightly managed process.

Originally, the dialogue had its clear red lines, including a no to partition, but these lines appear to have faded over the last few months. The success of the idea of partition is a result of this weakness.

Federica Mogherini and the EU have lost their way when managing the negotiations, and the US under Trump have promoted easy solutions, especially when these solutions would sabotage the EU’s earlier principles for the dialogue and most EU members care too little to be careful as negotiations progress.

Three groups exist that entertain the idea of border changes: those who would use the idea of border changes for themselves in the future, from Russia to far right parties in Europe; those who sit on the fence and would be happy with a deal, any deal, and don’t care about the content; and finally there are those who don’t care. Over the last year, all three of these groups have gotten stronger, and thus enabled the idea of partition during its time in the spotlight.

The tragedy in Serbia and Kosovo is that large parts of the opposition have been taking the bait with these partition talks. Some in the Serbian opposition have the same slogans as in Kosovo: Kosovo should not be sold out. However, the nationalist argument against partition is only helping Vucic and Thaci. It makes them look more “European” and “moderate”.

Radical claims by the opposition not only empower the two presidents, but also makes them look like the only desirable interlocutors for the West. The idea that rejecting independence for Kosovo in principle is a viable policy is simply denying reality.

Kosovo as a territory has not been under the control of the Serbian state since 1999. None of those who talk about selling out or the need to “defend Kosovo” when it comes to the recognition debate, changed borders or not, can offer any viable solution where Kosovo could become part of Serbia again.

Thus, they would prefer to live with an illusion of Kosovo rather than negotiate for a reality that has real consequences.

For Serbia, Kosovo might be a region “temporarily under different management,” but making this useful illusion a political slogan displays lack of perspective.

Instead, it would be more constructive to offer an alternative agreement with Kosovo. Rather than trying to outflank Vucic on the nationalist side, which is best left to Seselj and those who are or used to be in his party, a constructive approach could be to listen to Serbs from central Kosovo, who would be left outside “corrected” borders.

An independent Kosovo which protects those Serbs and a new relationship between Serbia and Kosovo based on mutual respect and an honest reflection on their collective past would be the best protection of both the Serb minority in Kosovo and their cultural heritage.

Similarly in Kosovo, those who opposed Thaci’s offer to correct borders need to imagine a different relationship with Serbia and with the Serbs in the country.

Talking about border changes is, in the end, a win-win scenario for both presidents. It sucks the air out of the debate so there is none left for anything else, including the state of democracy and the economic challenges that both countries face.

Now the debates are dominated by whether their ideas of borders is right or wrong, but it becomes a debate that favors nationalism, antagonism, and borders vs. cooperation.

The best border between Kosovo and Serbia would be the one that no one notices. However, if one observed the words and body language of the two presidents in Alpbach, it was clear that this shared position was one based on loathsome cooperation.

Big men who work together, stay in power together. The solution they discussed has nothing of the transformative nature a good and genuine historical agreement offers. Instead, it evokes cynicism and deceit, with both sides trying win the upper hand.

The contrast with the Prespa Agreement between Macedonia and Greece could not have been greater. Here, there were two prime ministers who had negotiated and worked together to find common ground, willing to defend the agreement together, not apart.

The idea of changing the border will be defended by the countries separately, not jointly. Already the word “razgranicenje” [demarcation] evokes this separation, creating a definitive boundary. However, not only will certain Serbs and Albanians still live on the “wrong” side of such a border, the idea of a definitive settling of borders between nations suggests separation, not cooperation.

This might sound naive in the environment of contemporary politics, yet the talk of border changes becomes more realistic the more outlandish and nationalist the alternatives are. If Vucic and Thaci can “deliver” a deal, no matter how bad, many outsiders will be relieved. Given the obstructionist and nationalist opposition and counter-arguments the deal is faced with, they will get the support they need to win.

If they make the deal, Vucic and Thaci will be celebrated as historic peacemakers, counting on years of political support from outside the region despite the undemocratic behaviour at home.

If they don’t make a deal, they have distracted the domestic and international audience for long enough to hold on. Either way, they are the winners and large parts of the opposition and the West currently seem to be playing their roles perfectly to make it work.

Florian Bieber is a Professor for Southeast European History and Politics at the University of Graz, Austria and co-ordinator of the Balkans in Europe Policy Advisory Group (BiEPAG).