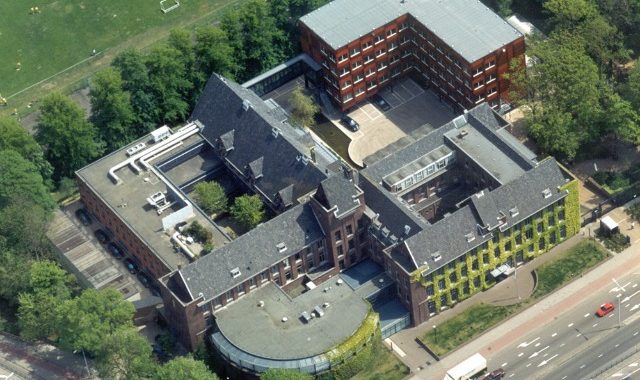 The Specialist Chambers building in The Hague. Photo: Europol.

The ‘specter’ of the Special Court hangs over Kosovo

During a policy forum discussing the Kosovo Specialist Chambers held in Prishtina on Monday, politicians and academics condemned the lengthy indictment process that the Kosovo public and political figures have sat through since the court began investigations.

A policy forum addressing the potential implications of the Kosovo Specialist Chambers and Specialist Prosecutor’s Office, KSC, in Kosovo was held on Monday at the University of Business and Technology, UBT, in Prishtina, with participants echoing a general sentiment that the political nature of the court has hurt its legitimacy before indictments have even begun.

The forum, named “Kosovo Specialist Chambers: A political game changer or another court down the drain?” was the third in a series of forums organized by the Free University of Brussels, with academics and politicians lambasting the Hague institution for its inconsistencies with EU policy and lack of clarity on procedures for participation of victims of the war.

The Special Court was established in 2015 to investigate and adjudicate on the alleged crimes committed on the territory of Kosovo during and after the Kosovo war between January 1, 1998 and and December 31, 2000.

Leader of political opposition party Vetevendosje, Albin Kurti, participated in the discussion, calling the court a ‘specter’ and criticizing the international community for wielding the court as a tool to gain self-censorship and obedience from Kosovo’s political elite, but refusing to issue indictments, thus steering clear of any responsibility itself.

“Once the court begins, it will be a target, but by not existing, it acts much more efficiently,” said Kurti. “We got our special court. I believe what we are missing is not being special, but rather being normal. We need normal courts, we need normal justice.”

Aidan Hehir, reader of International Relations at the University of Westminster, disparaged the EU, the main financier of the court, popularly known as the Special Court, for their role in the justice processes in Kosovo.

Hehir highlighted the contradiction between the EU’s own policy framework on support for transitional justice, which requires any process to be “nationally and locally owned,” and the reality of their efforts in Kosovo and with the Special Court, he said, which works primarily to serve the interests of external actors.

“This was, by any definition, a court that was imposed on Kosovo,” Hehir said. “There’s a strange disjuncture between the description and the reality, clearly all evidence suggests that this was not a bottom-up process.”

The Kosovo Assembly adopted the Law on the Specialist Chambers and amended its constitution to establish the Court in August 2015.

The Court became operational at its premises in the Hague in April 2016, and has had the ability to conduct criminal proceedings since the finalization of the Rules of Procedure and Evidence in June 2017.

One key gray areas of the court’s powers lie in its system of reparation for victims following trial, according to lawyer and criminology expert from the University of Leuven, Furtuna Sheremeti.

The Law on the Specialist Chambers states that the court has the ability, after trial proceedings have ended, to make a decision on any injury, loss or damage that may have been suffered by participating victims, which would then be the basis for the issuance of reparations.

Sheremeti said that the inclusion of victim participation in the court’s proceedings is a sign that victim’s needs may be addressed genuinely, and not just as a box-ticking exercise, despite the lack of clarity as to how this system will be structured.

“It is incredibly important to add victims into the court’s narrative as well,” she said. “Every time we talk about the Specialist Chambers, the focus is on the perpetrators, and victims tend to be the last point of discussion, if they are discussed at all.”

Robert Muharremi, assistant professor of public policy and governance at the Rochester Institute of Technology in Kosovo, analyzed the “strategic narrative” shaped by the allegations made in the 2011 Council of Europe, CoE, report on the basis of which the Special Investigative Task Force, SITF, began conducting criminal investigations in Kosovo, which has directly influenced public and political discourse surrounding the Kosovo war.

Muharremi said that the CoE report portrays those fighting for the liberation of Kosovo within the KLA as a minority, and  visualizes the army into a criminal organization. According to him, this view has dominated international discourse and paved the way for indictments of “joint criminal enterprise” against leaders of the KLA for the actions of others, that may have been sanctioned by leaders between 1998 and 2000.

Regardless of the outcomes of the court, the panel agreed the court’s existence was testament to the international community’s continued experimentation with Kosovo’s justice and reconciliation processes after the war.

“I said long before this court was established that Kosovo has been a guinea pig,” Hehir said. “There’s a saying that there’s no such thing as a failed experiment, and that’s true for the scientists. It’s certainly not true for the guinea pig.”