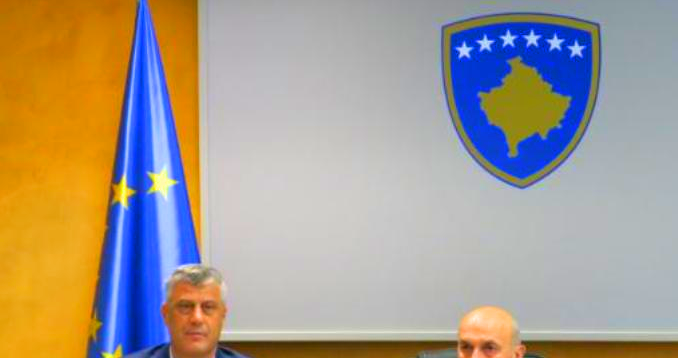 The violent prospects of a failing coalition

While Isa Mustafa will be the mascot of future state violence, the magnitude will depend on how much of it PDK wants to use against opposition parties and citizens.

Before Thaçi became President-elect, Mustafa was not alone. After all, he had the support of his main coalition partner to curb the demands made by the opposition or anyone else for that matter. Back then, PDK had every bit of reason to support Mustafa, because they still had to take over the presidency. Now that Hashim Thaçi has been elected President, his party has every reason to support the opposition instead of their coalition partner, and they will probably do so. As such, things can become even more violent.

Mustafa’s behavior – pressuring and potentially blackmailing his own party MPs to vote Thaçi for President – is MAD, Mutually Assured Destruction. In other words, Mustafa did an incredible job of digging the deepest political grave for both himself and his party. While this should be of a little concern to people beyond LDK’s narrow political and criminal interests, it is the danger which this poses to Kosovo’s near future that should concern us.

In a single day, Mustafa increased PDK’s future political leverage as many times as he decreased that of his own party. After all, he made sure that from February 26 onwards, PDK can unilaterally  decide on the coalition’s future. This also means that they can unilaterally decide on the future of LDK, and most importantly, the future of Isa Mustafa himself. Before Thaçi’s election as President, both coalition leaders depended on the agreement reached in December 2014. After Thaçi becomes President, Mustafa is the only man whose position and future depends on that agreement. It does not look good.

On the one hand, PDK’s internal structures and electorate will perceive Thaçi’s election as President as a major achievement for the party itself. At the same time, the party and its electorate never cared for the fact that PDK was cutting a deal with LDK as long as they could stay in power, keep the jobs, and the party businesses running – their main political credo. In other words PDK hasn’t taken any risks: as long as the main businesses are still running, the votes will follow.

On the other hand, LDK structures and electorate did not receive Mustafa’s decision to make a deal with PDK very positively. Divisions within the party and disappointment of the electorate were visible immediately after the coalition agreement was signed. Moreover, Mustafa did everything he could to make LDK’s staunchest political opponent – the person they accused of being responsible for the assassination of their party’s major intellectuals – the president. He even went as far as publicly berating every single one of his MPs who decided not to vote for Thaçi as President. Additionally, Mustafa violently closed the party doors to his political opponents during LDK’s internal party elections where he was “elected” Party President with a method called “standing ovation,” unprecedented in Kosovo’s history.

What does this mean? Well, PDK will chase votes under a victorious flag and perhaps lose very little with Thaçi becoming a President, while LDK will chase the few remaining votes, in order to at least muster half of what it got in the last elections. This is the outcome of Mustafa’s political mastery: making his own future and that of his party fully dependent on PDK’s whim. In other words, although Mustafa is the leader of LDK, it is PDK who can decide on the longevity of his mandate as a Prime Minister and not LDK – not at all.

The most generous conclusion would be to say that, after February 26, every LDK member of the parliament who voted Thaçi for President, voted for LDK to become a faction of PDK.

Any LDK supporter reading this will most probably mumble to themselves that LDK would never accept to become a faction of PDK, thinking that this is a matter of choice. Not anymore. After February 26, LDK is not a subject of the post-electoral PDK-LDK coalition agreement in which cabinet positions were decided together. At best, LDK can argue that they still remain a subject of the agreement only by accepting the fact that they have become a faction of PDK. LDK has no power in that agreement anymore.

Isa Mustafa knows this. He knows that he is not a subject to the agreement anymore, and that he can easily be ousted if and when PDK wants to. As such, if the opposition protests continue with the same magnitude and with the same persistence Mustafa’s loneliness and dependence on PDK will kick in and he will use violence to keep his political life running for as long as he can. Now, in a hypothetical scenario, if PDK really wants to send the country into early elections, and they have every reason to do so, they would join the protests incognito and make them even more violent (which has been their expertise since 2007) something that will certainly take the country into early elections.

Fearing the potential to be ousted, Isa Mustafa’s loneliness will kick in, and he will order his Minister of Interior to utilize state violence more liberally. This is the point in which Mustafa will understand another thing: despite having his own guy leading the Ministry of Interior, he is not the one who controls the degree of state violence in Kosovo. PDK can control the degree of state violence used by Mustafa through the Director of Kosovo Police who, while officially reporting to a LDK minister, in reality reports to his PDK bosses.

So, while Isa Mustafa will be the mascot of future state violence, its magnitude will depend on how much of it PDK wants to use against opposition parties and citizens who hinder its interests, and this ultimately depends whether or not they want to take the country into snap elections.

Shady days ahead. I am sure we should remain hopeful to see democracy unfold with these two behemoth gangs shaping Kosovo’s politics as the country’s “strategic partners” and “international friends” praise them for their democratic practices, and greatly contribute to keep them in power on a daily basis. Yet, in all this uncertainty of what will PDK do, and how violent it will get before we go to extraordinary elections, one thing is for sure. Now Isa Mustafa is alone – in this coalition, as well as in his party, which will make him act schizophrenically.