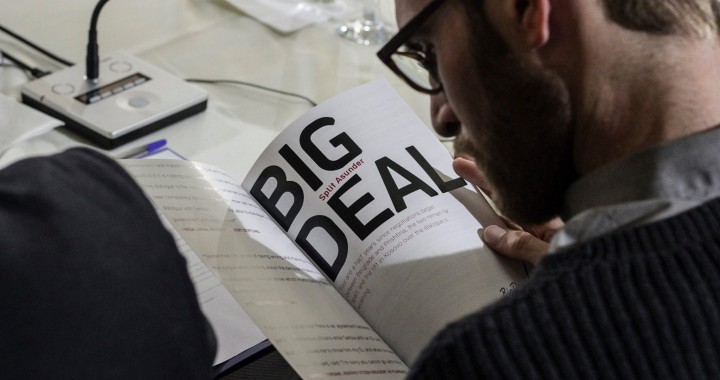 Three years since the ‘historic’ agreement was signed between Belgrade and Prishtina, what has been achieved and what roadblocks have materialized? We reflect on the process of negotiation between two capitals and the process of fostering a culture of civic oversight over their implementation.

BIG DEAL began in March 2014 as a collaboration between BIRN Kosovo, Internews Kosova and the Belgrade-based Center for Research, Transparency and Accountability. Both organizations are committed to presenting the public with the unvarnished truth in times when governments exert too much influence over mainstream media.

In the face of frustration that the messages about the on-going Kosovo-Serbia dialogue being sent by politicians in Prishtina are often different than those received by the Serbian public from Belgrade, and that Brussels remained tight-lipped while emphasizing the deals as a common foreign policy success, the two organizations teamed up to provide the first form of civic oversight over the agreements made in Brussels by leaders of their two countries.

At the launch of our first report in April 2014, we invited members of the Kosovo and Serbian negotiating teams to sit together at the same table alongside a representative from the EU External Action Service.  Our events are consistently the only time that members of both negotiating teams and EU facilitators appear together in public instead of behind closed doors in the boardrooms of the Berlaymont. While we may not approve of the content of all of the agreements, we fervently believe that it is important that those who sign them remain accountable to the public, and that their implementation should bring tangible benefits to the lives of ordinary citizens.

In these two years, BIG DEAL has grown. We welcomed as partners the north Mitrovica-based Advocacy Center for Democratic Culture (ACDC), the Belgrade-based Center for Euro-Atlantic Studies (CEAS), the Berlin-based Democratization Policy Council (DPC), and BIRN Serbia to launch a platform for organizations interested in civic monitoring of the implementation of the agreements, and we welcome organizations interested in joining us. This monitoring has taken the form of comprehensive reports assessing the level of completion of each of the agreements, TV debates, video packages, and investigative articles.  BIG DEAL has also made presentations of our research and advocacy in Prishtina, Mitrovica and across Kosovo, as well as in Belgrade, Brussels, New York, Madrid, Barcelona.

Our persistent monitoring and advocacy has also shown results both in implementation and transparency. After our reporting on how expensive and onerous the “freedom of movement” agreement made travel between Kosovo and Serbia, insurance companies from both countries agreed to recognize one another’s insurance plans. After a feature about the devastation faced by young people whose diplomas remain unrecognized, Prishtina and Belgrade recommitted themselves to implementing agreements they made for mutual recognition in 2011. After our continuous insistence that the European Union should not leave it only to the parties to publish the agreements, the EEAS published the full texts of the agreements reached in August 2015 for the first time.

On the third anniversary of the 19 April 2013 agreement, we are re-focusing the debate on one of the centerpieces of the on-going dialogue with Kosovo and Serbia, the planned Association/Community of Serb-majority municipalities and the precarious position its formation will put on Kosovo’s rule of law.

In our latest report, “Awkward juggling: Constitutional insecurity, political instability and the rule of law at risk in the Kosovo-Serbia dialogue,” written in cooperation with the Democratization Policy Council, we urge that Kosovo’s Constitution be respected by all parties in the implementation of the agreements. Although these are political negotiations, it is imperative that all parties, especially drafters take more care with the legal elements of the deals, or risk deeper political instability and very real threats to Kosovo’s precarious rule of law.

On this anniversary, BIG DEAL is also launching a web portal for all of our reports, stories and materials related to Kosovo-Serbia relations, accessible here.