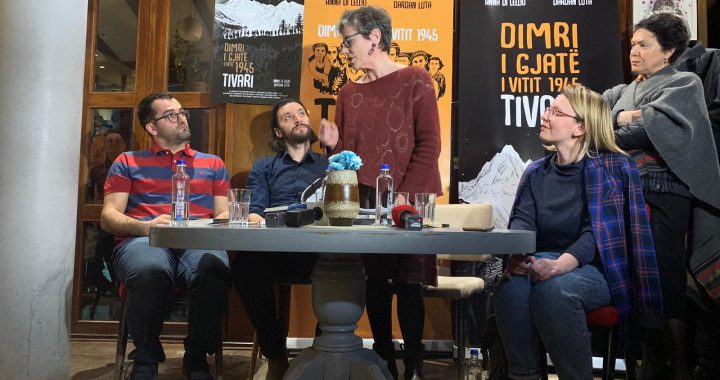 Kosovo’s first graphic novel detailing the events of the 1945 Tivari massacre in which hundreds of Kosovo Albanian men were killed was launched in Prishtina on Tuesday evening.

31 March, 1945: Marching barefoot in rows of four, an army of malnourished men enter the small town of Bar, Montenegro, known as Tivari in the Albanian language. After a grueling five-day journey through three different countries, the group of around 1,500 starving Kosovar partisans reach Tivari’s massive Tobacco Monopoly building.

Herded like cattle into the courtyard, many of the men feared the worst. The next day, hundreds of them would be killed in an event that is known today as the Tivari massacre.

Although tragic, the event has been rarely documented. This lack of recorded history was a thorn in the side of Anna Di Lellio, professor and sociologist, who has spent the last 20 years working and researching in Kosovo.

On Tuesday, almost 74 years after the massacre, she presented the graphic novel Dimri i gjate i vitit 1945: Tivari, or The long winter of 1945: Tivari in English, at Dit’ e Nat’ alongside co-author and illustrator of the novel, Dardan Luta.

In Di Lellio’s opinion, war historians continue to ignore the event. By telling this story in the format of a graphic novel, an illustrated account mostly based on oral testimonies from survivors of the massacre, Di Lellio and Luta hope that younger generations will be able to learn more about oft-overlooked parts of history.

“This is a new format for Kosovo, to have tragic history presented in a graphic novel,” said Di Lellio. “It is absolutely not to make fun of people, but I thought that since history is not always known, especially by younger people, this could be a way to let them sit down and read the stories.”

Tragic stories being portrayed in a graphic novel is not a rare phenomenon. Di Lellio found her inspiration for the book in the work of famous American journalist and illustrator, Joe Sacco.

“I love graphic novels. He [Sacco] illustrated several stories about Bosnia [and Herzegovina] and also about Palestine,” she explained.

“He wrote a book called Footnotes in Gaza, that is about a massacre happening in Gaza in 1956 that has been forgotten,” she continued. “So there are examples of comic books that deal with tragic history.”

The long winter of 1945: Tivari tells the story of young men from Kosovo that were forced to join a march of Yugoslav partisans on their way to Trieste, Italy, aiming to join the fight against Germans retreating during World War II. The circumstances surrounding why they were killed remains unclear to this day.

Being deprived of their weapons, three groups consisting of approximately 7,700 men left from Prizren on the journey to the Montenegrin town.

The massacre that followed this march is an important part of Kosovo’s history and identity, said Di Lellio.

Many facts about the massacre are both disputed and denied, she noted. According to her, Serbia does not recognize that the massacre at Tivari occurred.

The number of casualties recorded also vary depending on who you ask, Di Lellio said, with Yugoslav forces claiming that no more than 450 Kosovars died, while according to Albanian historian Uran Butka 1,560 men died at Tivari.

“In our history textbooks, the Tivari massacre is described saying that more than than 40,000 people were killed,” said Shkelzen Gashi, panelist at the book launch on Tuesday, explaining the vast discrepancies in numbers and statistics related to the event.

To give readers the complete picture, Di Lellio relied on eyewitness interviews, reports, memoirs and books written by historians.

“Everyone knows [about the massacre]. But, actually not everyone knows. In the sense that everyone has an own version of the story. There is no official history,” said Di Lellio about the knowledge of the massacre in Kosovo society.

“You can’t trust only oral sources,” she added. “You need to have documents, you need to establish certain facts. You can’t find ‘the’ truth, but I think this novel offers a clear approximation.”

According to Di Lellio, this novel marks the first time that the massacre’s documentation by historians, survivors and journalists has been put together in one book.

Di Lellio wrote and designed the graphic novel together with Dardan Luta, illustrator and lecturer at the Art Academy in Prishtina. In the foreword of the novel, she describes how Dardan felt the trauma of the killed men and survivors during the writing process.

“At times, he became the men he was drawing, feeling their anger, fear and desperation,” she said.

Having worked in refugee camps during the Kosovo war 20 years ago, Di Lellio said she has a strong connection with the country and its people. But, when asked how the intensive research for the story affected her, she admits that she works to separate writing from emotion.

“It doesn’t affect me, it’s history. It’s not emotional for me,” she admitted calmly.

Di Lellio explained that she leaves it to the survivors of traumatic events she writes about to explain their own feelings.

“I understand the trauma and the passion that people have about it. I’m working with stories of survivors: that’s emotion.”