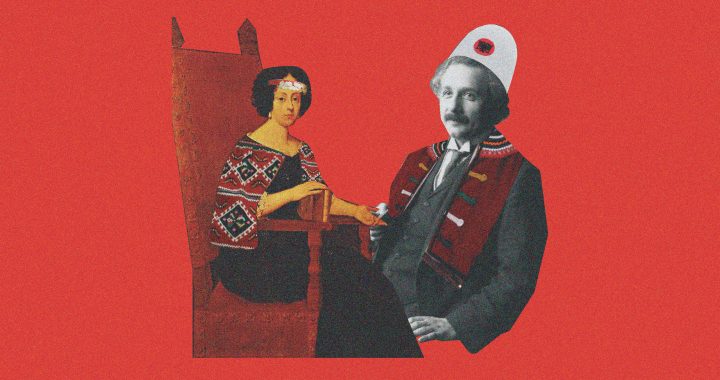 The urge to fake history

Though fake news is not an Albanian invention, faking history, or reaching with too much zeal to claim association with famous personalities, seems to be an Albanian obsession lately.

Lately Albanian media have been discovering various fragments of lost history. Who would have known, for example, that the first woman in the world to have received a doctorate degree had Albanian origins? Elena Lucrezia Cornaro Piscopia—or Elena Peshkopia, if you prefer an Albanianized version of her name—was born in Venice on June 5, 1646, and at age 31 earned a degree in philosophy from the University of Padua. Though she lived during a time when women were not yet permitted to attend institutions of higher education, Peshkopia went on to win an academic position at the university, and became so famous that throughout her professional life she was celebrated as a member of elite scholarly circles and societies.

Curiosity abounds about this famous seventeenth century intellectual, but nobody seems to be able to tell a convincing story about her Albanian heritage. The evidence, as presented in the media, seems to have been assembled by pure conjecture. Someone sitting somewhere, dripping with boredom, must have imagined that her name “Piscopia” sounds pretty close to “Peshkopia,” a small town in northeast Albania, and that, in itself, is supposedly a sufficient anchor to establish her national heritage. How did this woman of such humble origins become world famous during Renaissance Italy? This, one imagines, must have been during waves of Albanian immigration to that country from the Middle Ages on—and who’s to say that Peshkopia’s ancestors were not among those emigrants. Nobody can disprove such a claim.

This may sound ludicrous, but fantasy stories like the one above are printed and served as genuine historical events to millions of Albanian readers. The dubious story of Elena Piscopia may have originated in August 2016 in an obscure Albanian magazine called Gentle Women, but it spread through the media sphere with lighting speed. As of last month, the story was still circulating in Kosovo-based news organizations like RTV21 and Koha. Though fake news is not an Albanian invention, faking history, or reaching with too much zeal to claim association with famous personalities, seems to be an Albanian obsession in recent times.

Some famous figures, like Mustafa Kemal Atatürk and Muhammad Ali of Egypt, indeed had some Albanian heritage and there is scholarly evidence in support of that. But Elena Lucrezia Cornaro Piscopia was not one of those. According to Francesco Ludovico Maschietto’s biography of her, she was born into a noble Venetian family, which had played a major role in the cultural, artistic, and social life during the Italian Renaissance for more than 250 years. Maschietto traced the connections of the Cornaro family to the ruling dynasty of Cyprus, where the Cornaros played an important role in bringing that island under the Venetian rule. Elena’s father, Giovanni Battista, was an educated and influential personality who used his high status to nurture his daughter’s education. He had inherited a large fortune, including a library with thousands of volumes, which were available to Elena’s scholarly pursuits from an early age. Although Elena’s mother was a peasant woman of obscure origins, there is no evidence that she had any connections with Albania. Elena studied linguistics under celebrated teachers of the day in Venice and though she was not permitted to pursue her doctorate in theology, she successfully completed an oral examination in June 1678 on two Aristotelian philosophical texts.

But Elena Lucrezia is hardly the first case, nor will she be the last, of such historical fiction passed on as truth in the Albanian media.

Not long ago, another even more prominent name, Albert Einstein, became a sensational news item in the Albanian media. This story seems to have initially come from a short documentary film, Rescue in Albania, which while describing how Albanians saved Jews during World War II, also claimed that one of those rescued Jews was the famous scientist. In the early 1930s, the story went, the government of Albania played a crucial role in rescuing Einstein from the Nazi regime by issuing him an Albanian passport, which he used to travel to America. The story went viral for a while and was shared thousands of times in traditional news channels, the blogosphere, and on social media. So irresistible was this historical discovery that it prompted government officials to boast about it, including Albania’s Deputy Foreign Minister Edith Harxhi during a conference on tolerance and nondiscrimination. Eventually, the story got the attention of Barbara Wolff, the Director of Albert Einstein Archives at the Hebrew University of Jerusalem, who apparently saw it necessary to react by commenting on a poorly written article published on “Dielli,” an  Albanian-American newspaper. “Dear Albanians,” she wrote, “I do not doubt that your country protected… Jews during the Nazi years. However, Albert Einstein was not among those people. Thanks to original documents in our archives we can easily… prove that he did neither need nor use an Albanian passport before or after 1931.”

Those same archives were consulted by the American author Walter Isaacson in his seminal biography of the physicist, Einstein, His Life and Universe. In his exhaustive research on the scientist’s life, never did Isaacson find anything that hinted at the possibility that Einstein ever set foot in Albania, let alone be issued an Albanian passport. Having visited the United States a couple of times before with a German passport, Einstein used his Swiss passport to sail to America, in October 1933, from Southhampton, England, never to return to Europe again.

Now, admittedly, one may overlook these flimsy stories as mere mishaps in an internet-based, topsy-turvy industry where the urge to publish sensational articles is mostly driven by business greed. But such an obsession to rewrite history is far more troublesome, mirroring not just lack of professionalism and journalistic integrity, but a profound ignorance of history. It need not be so, but poor education is mostly to blame. In particular, Albanian historiography, with its tendency (and obsession) to advance a patriotic form of history, has played a devastating role in misinforming those who have relied exclusively on Albanian textbooks to learn about the nation’s past—which, when studied in a proper context, has always been a fascinating subject.