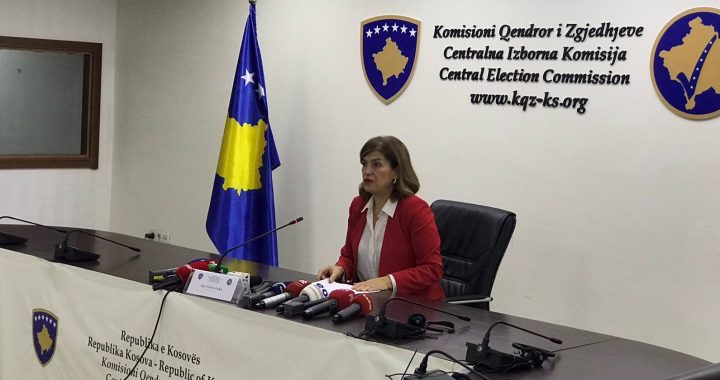 The head of the Central Election Commission has hit back against public criticism from political figures over the potential exclusion of some candidates from the upcoming elections, describing it as direct interference in the Commission’s work and the implementation of the law.

In a press conference on Thursday, Valdete Daka, the head of Kosovo’s Central Election Commission, CEC, lambasted the public response to news that the Kosovo Judicial Council, KJC, has identified 47 candidates that do not meet the Law on General Elections.

Daka said that threats made by political parties, addressed to the CEC as well as to her personally, are direct interference into the work of the institution, and are attempts to prevent the implementation of the Constitution and the law.

“Public threats towards me, and the concern that my family is experiencing, are unprecedented and dangerous,” Daka told the press conference. “As for candidates who yesterday found themselves on the KJC list as persons who do not meet the criteria to be certified as a candidate for [MP], I will tell you simply – it is the law and the decision of the Constitutional Court that make it impossible for them to run, and not me.”

Leading figures in both Vetevendosje and the Alliance for the Future of Kosovo, AAK, were critical of the CEC on Wednesday. Vetevendosje’s former foreign minister Glauk Konjufca accused the CEC of wanting to “politically eliminate” Vetevendosje leader Albin Kurti, who is reported to be one of the 47 candidates identified by the KJC.

Earlier on Wednesday, former Vetevendosje justice minister Albulena Haxhiu, who is also reported to be one of the candidates identified by the KJC, described “attempts to remove Albin from the list” as “the last efforts of those who captured the state.”

Meanwhile, AAK’s Daut Haradinaj, brother of party leader Ramush Haradinaj, described Shemsedin Dreshaj’s reported appearance on the KJC list as “strange” adding that AAK will pursue all legal avenues to appeal any decision to remove him from the party’s candidates.

At Thursday’s press conference, Daka insisted that she did not draft or vote on the Law on General Elections, but promised Kosovo’s citizens she would uphold it.

“I did not write Article 29 of this law, I did not write point Q of the article which prevents the candidacy of a person who has been found guilty of a criminal offense by a final court decision in the last three years,” she said. “But as the head of the CEC, I guarantee the citizens of the Republic of Kosovo that I will implement the laws to the letter.”

The CEC head added that anyone who believes they are being treated unfairly could complain to the Election Complaints and Appeals Panel or the Supreme Court.