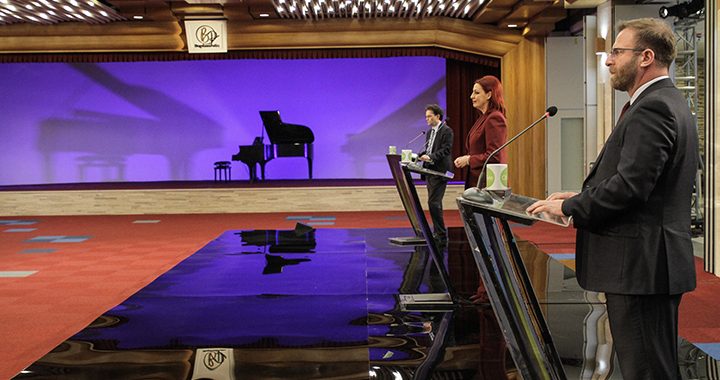 The effects of the Washington agreements divided representatives from LDK and Vetevendosje in a BIRN electoral debate on Thursday.

Kosovo’s decision to establish bilateral relations with Israel and recognise Jerusalem as its capital found itself at the centre of discussions during a BIRN pre-election debate broadcast on Thursday.

The European Union, Turkey and the Arab League have all criticised the outgoing Kosovo Government’s decision to locate Kosovo’s future embassy in Jerusalem. However, LDK’s former deputy minister of foreign affairs Valon Murtezaj stated that Kosovo’s next government should stand by the agreement, stating that any future ramifications are unlikely.

“Kosovo should stick to its agreements and pledges,” Murtezaj said. “I am sure that this will never be a serious issue between Kosovo and the European Union.”

But for former Vetevendosje deputy prime minister Haki Abazi, the subject is open to debate. Abazi stated that the incoming government needs to review the issue, and should coordinate with the EU on any future decisions.

“It is a complex issue that needs to be discussed at a diplomatic level, as the EU’s stance on where the embassy is located is very important,” Abazi said.

He added that a new government led by Vetevendosje leader Albin Kurti would sit down to talks with both the state of Israel and the EU, in order to “find a solution to this knot that was created without any reason by the former government.”

Abazi went on to say that all of the promises that Kosovo signed up to in Washington DC last September should be reviewed by the incoming government.

The former deputy prime minister highlighted Kosovo’s agreement to a moratorium on seeking membership to international organisations, as well as its pledges to rename Lake Ujman after former US president Donald Trump and join the so-called ‘mini-Schengen’ area as policies that should be scrapped.

Murtezaj also argued that joining the so-called mini-Schengen area, an economic zone proposed by leaders from Serbia, Albania and North Macedonia in October 2019, is something which needs to be reviewed by the next government. He stated that a breakdown of any future agreement to join the initiative is required, in order to ensure that Kosovo’s national interest is protected.

The former deputy foreign minister also argued that the feasibility study on Lake Ujman outlined in the Washington agreements does not bind Kosovo to sharing its resources with Serbia. “Nothing will happen after the feasibility study,” Murtezaj said, adding that Kosovo does not need to “make compromises” on this issue.

For Abazi, any compromises made in Washington DC should not guide the incoming government in any way.

“I think we need to make it clear that any concessions, particularly those relating to the mini-Schengen area and the withdrawal of Kosovo seeking membership to international organisations for a year, cannot be taken into consideration by the new government,” he said.