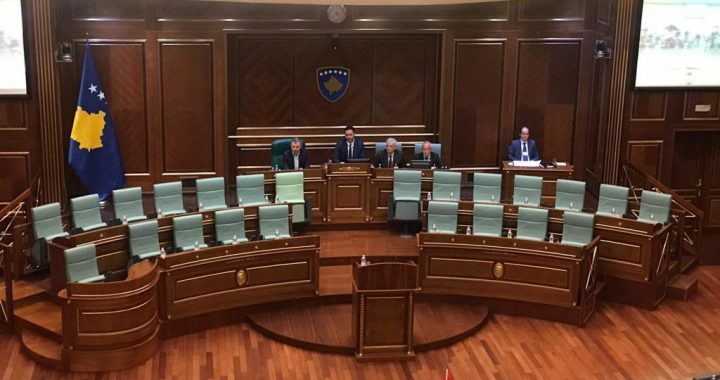 The constitutive session to form Kosovo’s next legislature was held at the Kosovo Assembly on Thursday, two months after the parliamentary elections on October 6. 111 MPs were sworn in to serve in the next mandate, which now begins running and has an expiry date of four years from now.

In an unexpected turn of events, Glauk Konjufca of Vetevendosje was also elected Speaker of the Assembly, with 75 votes in favor, 27 against and six abstentions. Five Deputy Speakers were also elected: Arberie Nagavci of Vetevendosje, Kujtim Shala of the Democratic League of Kosovo, LDK, Memli Krasniqi of the Democratic Party of Kosovo, PDK, Fikrim Damka of the Turkish Democratic Party of Kosovo and Slavko Simic of Lista Srpska.

The temporary Mandate Verification Commission that was created on Thursday swore in 111 of the 120 new MPs, with nine high profile absences: Uran Ismajli, Abelard Tahiri, Pal Lekaj, Ramush Haradinaj, Fatmir Limaj, Enver Hoxhaj, Behgjet Pacolli, Endrit Shala, and Kujtim Gashi, who will be required to take the oath in the next session if they are to become MPs for this mandate.

Following the swearing in session, Albin Kurti, as the leader of the most voted for party, Vetevendosje, gave his nomination for Speaker of the Assembly.

This was anticipated to be a potential obstacle in the session, with coalition talks between Vetevendosje and the Democratic League of Kosovo, LDK, still yet to reach a conclusion. Reports suggested that the position of Speaker would likely go to a representative of LDK as part of the coalition agreement, but Kurti instead nominated Konjufca, who received the backing of both Vetetvendosje and LDK MPs at the vote.

Jahja Koka, who led the inaugural session as the oldest MP at the Kosovo Assembly elected in October’s elections, invited Konjufca to address the Assembly. Konjufca briefly thanked the citizens of Kosovo for their support as well as all the MPs who voted for him, before closing the session.

Under the Kosovo constitution, the Assembly will be dissolved within 60 days of the constituent session if a government cannot be formed, adding pressure to the ongoing talks between Vetevendosje and LDK.

Konjufca was one of the founders of the Vetevendosje movement in 2005, which transitioned to a political party in 2010. Konjufca has been elected as an MP four times, and was the second most voted Vetevendosje candidate in the October elections, receiving over 72,000 votes.