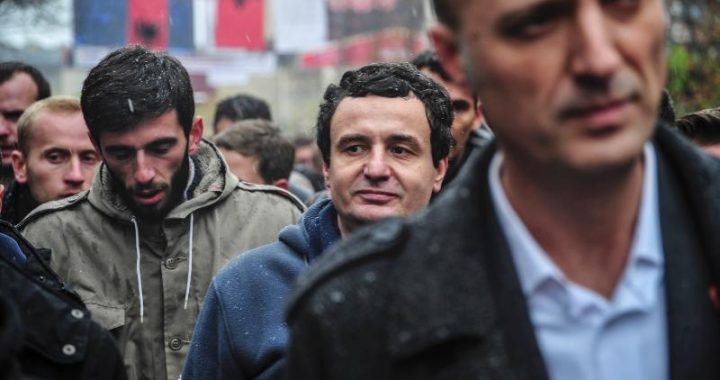 After a leak exposed internal rift, Vetevendosje members and activists discuss whether or not the party could potentially split.

What started out as an internal dispute among Vetevendosje leadership has blown up into a full media frenzy surrounding Kosovo’s biggest opposition party.

After a Viber conversation leaked to the media last week, in which MP Aida Derguti insulted the party’s Prime Minister candidate Albin Kurti by calling him a “shit,” the party seems to be in disarray. Meanwhile, Kurti is currently in detention for failing to appear in court regarding his charges for throwing tear gas in the Assembly.

After public pressure, Derguti, the most voted woman in Vetevendosje resigned her party presidency membership and as the chair of the Vetevendosje branch in Vushtrri.

Activists, Vetevendosje members and supporters took to social media, discussing a potential split between two camps in the party; analysts and party-supporters attest to ‘tectonic’ shifts within the party — the first time since it was founded 12 years ago.

On Monday, the Vetevendosje party leadership and the parliamentary group met for a marathon meeting of more than six hours. The drawn-out meeting concluded with a one minute statement and no follow up for journalist questions.

Visar Ymeri, the leader of the party, summarized the long meeting by asking Vetevendosje activists to stop the insults against Vetevendosje MPs, but he did not say anything about a potential split within the party he has led for almost three years.

Imer Mushkolaj, a political analyst, told BIRN that there is a possibility of a split within the fast-growing party, but that he believes that even Vetevendosje is awaiting for Albin Kurti’s interpretation of the latest developments.

“There are disagreements, we can even call them divisions,” Mushkolaj told BIRN. “But I think that Vetevendosje is waiting for Mr. Kurti, so that he can have his say. But as long as he remains in jail, the situation will remain as is.”

According to Mushkolaj, Vetevendosje is ‘linked’ with the name of Albin Kurti, regardless of the wishes of his political opponents. Furthermore, Mushkolaj added that he does not think it a good idea if Kurti is politically pushed out, despite the fact that in the last couple of years, new individuals have made it to the top echelons of the party.

“Vetevendosje has changed since the time of its creation. There are now new individuals who wield great political power. Current Vetevendosje successes are not exclusively Kurti’s achievements, but rather of many people in Vetevendosje,” said Mushkolaj.

While some Vetevendosje MPs defended Derguti when she announced that it has been over a year that Vetevendosje has had problems, there were others who immediately demanded her resignation.

According to Ismet Kryeziu, the director of Kosovo Democratic Institute, KDI, said that Vetevendosje’s political power will suffer because it lacks the political potential to offer two new parties to Kosovo’s political scene.

“Vetevendosje lacks the political potential to offer two new political parties to Kosovo’s political scene, and any kind of a split could hurt the party’s political power. But while there is still no visible split and while we still don’t have an active development to see the power of those who would take a stand in these potential factions, we cannot conclude the level of potential damage. But nonetheless, even if a potential split happens, and if there is no creativity and political courage to form an internal consensus, in the long term, the winners will be those who stand under the banner of Vetevendosje,” Kryeziu told BIRN.

Even though Visar Ymeri, the Vetevendosje party president, asked its activists to stop their criticism throughout social networks, nothing would stop the torrents of statuses.

Earlier this week, Molliqaj ‘liked’ some Facebook posts of some Vetevendosje members, including the one written by Aida Derguti, that caused a calamity throughout Vetevendosje, which until last week was seen as the most unified party in Kosovo.

Agon Maliqi, another political analyst, said that Molliqaj’s discontent is related to the fact that he was removed from the post of party secretary.

According to Maliqi, the latest developments show that Molliqaj was discharged, rather than resigned from his position after this year’s June 11 elections.

“It is evident that Molliqaj is unsatisfied with his removal from the Organizational Secretary position. It seems that it was not a resignation, but rather a discharge. He did not give a public statement about this, but rather gave signals as to his orientation,” Maliqi said.

Mushkolaj, meanwhile, urged Molliqaj to speak out and make a statement, especially if he was indeed discontent with the party.

Meanwhile, Molliqaj also broke his silence on Thursday posting a Facebook update apologizing to people for not responding in time and saying that “a lot of misinformation and slander” were thrown around.

“There has been slander and a witch hunt,” Molliqaj wrote, saying that he would make his position known during the debate on Klan Kosova on Thursday evening.

Shpend Ahmeti, who after winning the second mandate as the Mayor of Prishtina continues to be seen as someone in the rise within the party, said that there is no chance of any split of Vetevendosje.

“No, there are no divisions,” said Ahmeti on Monday, when the marathon meeting happened.

On the other hand, Fisnik Ismaili, Vetevendosje MP, said that “Vetevendosje does not have any chairs,” alluding to the 2006 events that led to the split within the Democratic League of Kosovo, LDK, when its members used chairs in a brawl during the party’s Convention that was to elect its leadership.

Meanwhile, debate between Vetevendosje activists has been present on social networks.

In case of a possible split, Mushkolaj said that the Kosovo experience dictates that those who leave fail to create a separate entity that is strong enough to make it.

“The experience in Kosovo showed us that such a thing is impossible. We have the example of LDD [the Democratic League of Dardania], who in the beginning were quite strong and had several seats in the parliament, but later ceased to exist. Then we have NISMA, who barely managed to survive as a small party. Therefore, in Kosovo, it seems to not be possible that a party that secedes to emerge stronger than its parent. They could split, create a new party, but I don’t think that they would have the power like the one they currently have within Vetevendosje,” Mushkolaj said.

Agon Maliqi explained what Vetevendosje could lose in the event of a split.

“If the ‘rebelling faction’ leaves, it would mean loss not only of votes, but also of human resources and organisational capacities, which would no doubt damage Vetevendosje, by transforming it back into a third tier party,” said Maliqi.

According to Aida Derguti, ‘the main character’ in this debate, these internal problems have been going on for more than a year.

“These problems and disagreements have been going on for more than a year. I had always been involved in trying to solve them. This will be the Vetevendosje’s organisational power. But our attempts were sabotaged and continue to be sabotaged by certain people,” Derguti wrote on her Facebook profile on the day when the Viber communications became public.

Meanwhile, activists continue to write and discuss via their social media profiles, as well as Facebook comments. Directly and indirectly, they are ‘crucifying’ Dardan Molliqaj, former secretary of Vetevendosje, whom they are labeling as the main person responsible for what is happening to the party.

Molliqaj is expected to address the media and public tonight on Klan Kosova’s Zona B talk show.