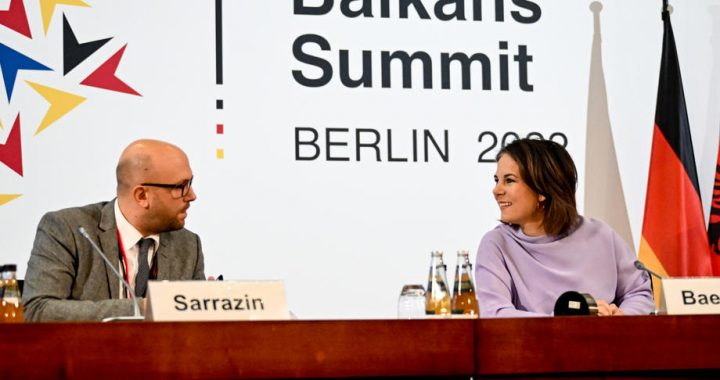 Visas Scrapped between Kosovo and Bosnia

Western Balkans foreign ministers have signed three agreements in Berlin on free movement with IDs among citizens of the region – and for mutual recognition of university degrees and professional qualifications.

Representatives of Western Balkan countries signed three new agreements in the framework of regional cooperation in the Berlin Process on Friday. Among these agreements, free movement with ID cards between the countries of the Western Balkans is envisaged, which includes visa-free movement between Kosovo and Bosnia and Herzegovina.

German Foreign Minister Anna Baerbock said at the conference on Friday that people from Kosovo and Bosnia-Herzegovina will benefit most from this agreement, and will no longer need a visa to visit each other.

Baerbock said these agreements ease the way towards the creation of a Common Regional Market.

“This means that Kosovar and Bosnian young people will visit each other without visas, which is common for us Europeans. It means that students from Albania can use their bachelor’s degree to work in North Macedonia, and that architects from Serbia can work in Montenegro,” she added.

The general secretary of the Regional Cooperation Council, Majlinda Bregu, wrote on Twitter that thanks to the agreement, graduates will no longer need to pay fees of 200 to 500 euros for mutual recognition of diplomas.

“The agreement on movement with identity cards destroys the last remaining visa wall in the region, the one between Kosovo and Bosnia and Herzegovina,” she wrote.

The final signing of three of the four agreements is expected on November 3 in Berlin.

Leaders of the countries of the Western Balkans and the ten other participating countries of the Berlin Process, as well as representatives of the Council of the European Union and the EU Commission, are expected to attend.

As part of the Berlin Process, the Western Balkan states in 2020 in Sofia signed an agreement to create a so-called Common Regional Market, which would include the four freedoms of movement: of people, goods, capital and services.

In cooperation with the European Commission, the Berlin Process also resulted in the creation of the Regional Economic Area, as the first step towards regional economic cooperation.

The Berlin Process is a German-led initiative with a mandate to facilitate regional cooperation between the six countries of the Western Balkans – Albania, Bosnia and Herzegovina, Kosovo, Macedonia, Montenegro and Serbia – to enable them to join the EU.