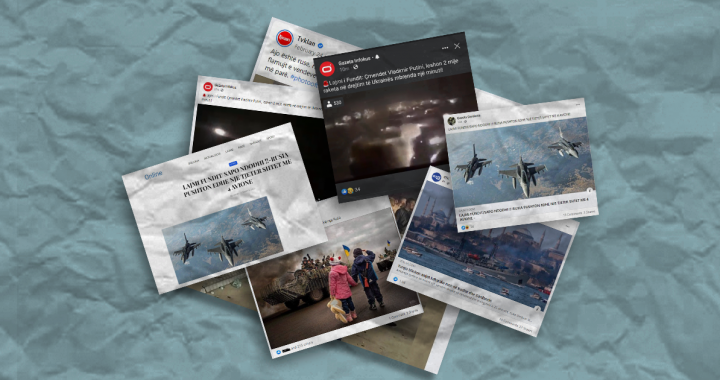 Kosovo is being deluged with fake news about the conflict in Ukraine, making it hard for citizens to tell what is true or false.

While fierce fighting continues in Ukraine, the opportunity for media propaganda is massive. Instead of supplying quality information at a time when every piece of information has more weight than usual, some portals in Kosovo pay little heed to the truth.

Faced with a barrage of clicks, financial gains and a shift in perception of what is really going on, there is a lack of fact-checking and citation of unverified and unreliable sources about the fast-paced events occurring in the war zone.

Social media play an inalienable role in political and social processes, but as long as people are killed and territorial integrity is violated in one country of the world, misinformation changes perceptions of the real situation, as has occurred throughout the history of wars.

Due to actuality and the speed of the course of events in real time, experts say fake news can be used for propaganda, as a consequence of the lack of knowledge in distinguishing true news from false ones.

But what way can we protect ourselves from this? Experts estimate that when everyone has access to read any information on the Internet, media education is needed, following the dynamics of technology, or, on the other hand, the creation of legal mechanisms.

Dren Gërguri, Professor of Journalism at the University of Prishtina, says the wars in Ukraine, Kosovo and all over the world have brought a new wave of misinformation.

There is growing interest in getting as much information as possible about what is happening in a war zone. According to Gërguri, there are many motives behind misinformation, starting from economic ones to political and ideological motives.

Gërguri calls on journalists to be more careful about the information they receive and transmit. They need to verify it, or, if they do not verify it, not to publish it at all.

According to him, there are many credible programs on the Internet where journalists can verify whether the news, photos or videos are true, because such information is being served to an audience which very often reads emotionally, not rationally.

“There is always more interest in a certain topic, so those who deal with misinformation take advantage of this situation and start producing misinformation about that topic,” he says.

Imer Mushkolaj, chairman of the Press Council of Kosovo, told PI that in recent days he has noticed that online media are becoming more careful in publishing news than they were at the beginning of the war in Ukraine.

Mushkolaj also says there are many reasons why portals during the war are publishing false news, whether this is due to a lack of ethics, lack of verification of facts, irresponsibility, clicks, topicality and propaganda.

“There are cases when such news is published from the idea of ​​publishing something more ‘interesting’ for the public, that is, to serve as bait for the public. Others are done on purpose, when I say on purpose, it is about short videos which the media publish in order to encourage readers,” said Mushkolaj.

Another problem he says is media that are lazy in verifying the news, due to speed, and which publish tens of hundreds of news items a day which they fail to examine properly.

“This information war that is taking place in cyberspace has a multiple character and is dangerous in the sense of manipulating the masses and public opinion,” he told Prishtina Insight.

In addition, he says, the rapid nature of the conflict and the events related to the war in Ukraine increase the need for rapid news, which may be unverified due to time pressure.

According to him, there may be cases when credible media fall into the trap of distributing this news.

One such case occurred with the Telegraph portal, where a pseudo-portal used its name and logo to publish a lie alleging the death of Ukrainian President Volodymyr Zelenskyy.

Fake news are among the articles with most distribution and visibility with the audience.

Information technology is used a lot to reach audiences through fake news which have exponentially increased during the war in Ukraine, cybernetics expert Driart Elshani says.

New technological techniques are being used to make fake news as viral as possible in cyberspace, says Elshani.

“Every citizen who owns a smartphone can record images and videos from conflict areas, and then the volume of news is so large that it becomes much more difficult to identify and distinguish true news from false news,” he said.

In 2016, KALLXO.com and Life in Kosovo for the first time in Kosovo launched the truth meter, or fact-checker.

Krypometri, working as part of the International Network of Fake Verifiers, IFCN, monitors media that publish news in Albanian about the war in Ukraine. During the war it has done more work than usual.

Disinformation has got to the point that even portals like Express, Metro, FaktePlus, Fakti Editor] publish fake news, for example proclaiming electronic video game shots as shots of real fights between Russia and Ukraine.

Dren Gërguri has noticed in the wave of misinformation about the war in Ukraine the use of images from video games and their manipulation, taking advantage of the fact that a number of citizens cannot distinguish them from reality due to their advanced technology.

“For some they can really be convincing, but if they had been better informed. they would have noticed the possibility of manipulation,” he said.

Numerous cases of fake news have been made using old photos taken from events in which Ukrainian state symbols, such as the flag, were present.

One case is a photo of a couple taken in Poland during a concert in 2019, where two young people are seen next to the Ukrainian and Polish flags.

Imer Mushkolaj saw the publication of such a video as a sign of a lack of responsibility of those who published it in terms of distinguishing between a war on the ground and a video game.

“This is a very serious omission in the ethical aspect of informing the public. So … in the absence of knowledge and experience in verifying false news (without wanting to justify the media) it happens that such news are published,” he said.

According to him, the war in Ukraine, in a way, is at least serving to raise awareness among the media, journalists and editors of the dangers of publishing news without verifying it.

On the other hand, Elshani says that no one is immune from fake news and that Kosovo should create additional mechanisms to combat and prevent fake news using a regulatory framework.