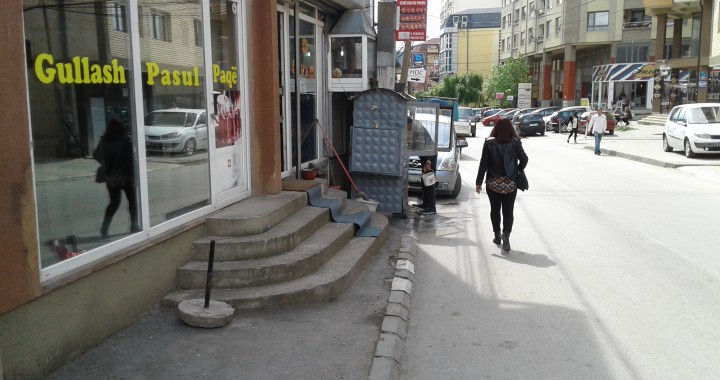 Our pavement monitor recounts his experiences of discovering rampant appropriation of public space in the streets of Prishtina.

Kosovar pedestrians are training every day for the next Olympics Games and this has nothing to do with Judo! In Prishtina, a new sport is born: urban obstacle marathon. Here the obstacles are not “ready-to-fall” hurdles but cars, café terraces, steps, shops equipment, road signs, bins – and these are not as easy to jump over or bypass.

As a pioneer in this new sports event, I spent a  couple of months methodically walking along approximately 40 kilometres of pavements in the numerous streets of Prishtina’s city centre. I registered almost 200 spots where the passage of pedestrians, but also pushchairs and wheelchairs, is obstructed by objects that have no right to be there. This means that, on average, every 200 meters a pedestrian faces an obstacle obstructing his passage. And I am not even taking into account what I consider the most volatile and unquantifiable virus infecting the pavements of Prishtina city centre: random cars and trucks, parked here and there, for one minute or four hours.

During this marathon journey, I had a chance to talk to citizens and hear their opinions about why is the situation so dire. Their answers generally fall into a few categories. Some of them blame inadequate spatial planning in the past. Others cite the lack of proper public transport. A large group mentions the lack of space to park the incredible amount of cars that are coming in and out of Prishtina every day.

Some also cited the so-called “Kosovar mentality” toward public areas, which in his mind would allow drivers to park wherever and whenever they want. I am especially remembering my meeting with someone I will call Fitim, who came to me when I was taking pictures of huge concrete pots holding trees, and (not that) low walls, still too high to pass them without doing a perfect Fosbury flop (style of high jumping named from the athlete Dick Fosbury, who used it to win the gold medal in 1968 Summer Olympics). Fitim is not only the manager of the building and owner of a few flats in it, but the person responsible for these obstructive constructions. When a woman passed the entrance of the building with her baby in a pushchair, he invited me into his office and started drawing on a piece of paper how cars would park in front of his building and prevent this mother and her baby to reach their home. And he explained: “Here, people spend money in buying big cars, but they don’t think about where they are going to park them. Car owners park wherever and whenever they want. The only way for me to protect my building’s entrance is to display obstacles on the pavement”. Problem is that the pavement is quite narrow there and this is not an isolated case. Obstacles for cars becomes obstacles for pedestrians too.

Parking on the pavement, illegal but quite tolerated behaviour, is a symptom of a more deep-seated problem: the way private individuals or businesses and public authorities are (not) considering pedestrian’s rights, leading to a constant usurpation of pedestrian public space, which usually benefits private interests.

Is it normal to force pedestrians to walk on the road when a bank or an embassy wants to park their cars, when a café owner chooses to install his terrace on the pavement or when a homeowner decides to extend his house on the public space? “Of course not!” should be the answer. However, the Olympic course that is Prishtina exists because neither private individuals nor organisations,  do much to change the situation. Neither do local authorities. There are numerous cases in which blatant usurpation of public space is authorised by the municipality, which is getting income out of it. Other cases have been allowed by previous municipal governments and little has been done to change them. Where this is not the case, businesses, institutions or individuals are simply granting themselves the right to usurp pedestrian rights for their own benefit.

Given the many problems faced by Prishtina and Kosovo in general, one could ask if this topic is really important. It is, because also during my walks in Prishtina I happen to observe many instances where mothers with babies, elderly and young citizens put their lives at risk by walking on the road and putting themselves at the mercy of Prishtina’s drivers – with sometimes fatal consequences, and many injuries that often go unreported. I myself witnessed or was directly involved in such cases: pedestrian arms being hit by wing mirrors and feet crushed by wheels when being forced to use the road, running kids falling in the middle of the traffic for not bypassing well enough an obstacle on the pavement or tumbling head-first on the ground for having missed a chain delimiting a private parking lot on the pavement. I especially can’t forget this troubling accident scene in Prizren – a city which at first sight looks a bit more pedestrian friendly than Prishtina. I first heard the loud noise of the impact between a car and human body before noticing the old man on the ground. People gathered around him and after a couple of minutes, the elderly man finally stood up with the assistance of a few onlookers, limped for a few meters while observing with a sad look his apparently painful arm. The at-fault driver – apparently an acquaintance or a family member – and some of his relatives quickly hid led him into the nearby family home. The irony is that it was an accident between a pedestrian forced by various obstacles on the pavement to walk on the road and a car driver that was about to reverse parking on this pavement.

Forcing citizens to use the road constitutes a real public danger and affects Prishtinalis’ – more largely, all Kosovars’ – quality of life. And, allowed or not by the Municipality, it remains illegal. According to law on road traffic safety, only “the Municipal Assemblies may allow the use of the sidewalk part (embower, tables, seats, kiosks and similar) [under the] condition that it does not to diminish the road visibility and pedestrian movement to be undisturbed and safe while allowing space to the sidewalk with width from at least 1.5 meters (…)”.

So, however difficult the problem may be and how many other challenges the Municipality faces, nevertheless it is their responsibility to improve pedestrian conditions in Prishtina: illegal occupation of the pedestrian public space has to be combated and those responsible must be prosecuted and effectively penalized. When occupation is allowed, the municipal government has to ensure that pedestrians’ rights are respected in accordance with the law.

However, in recognition of the many challenges that the city faces, and perhaps the lack of resource to measure the problem, we at Kallxo.com have decided to contribute by mapping the main obstacles in Prishtina city centre – and making it accessible for citizens to report and contribute. This is half of the job done already.

So far, close to 200 spots have been identified in central Prishtina and reported by Kallxo’s reporters on our online map. There are obviously many other spots that remain unidentified and citizens can contribute to the by disclosing them on our reporting webpage. But this is not a ‘name and shame’ project. We also welcome and encourage posts of improvements, and those who decides to liberate the pavements from obstacles can also contact us. Get involved on KALLXO.com, and let’s make Prishtina more pedestrian-friendly – by removing one obstacle at a time.