When the state closes its libraries

Over the last decade, an absence of investment and institutional care has resulted in the closure of 53 libraries in Kosovo. With only five new libraries being opened, the country is left with a total of just 107, signalling a drastic decline in reading spaces in the country.

Whenever reminisces about the past, Alisahit Bunjaku inevitably remembers the library in Desivojce, a village near Kamenica in eastern Kosovo. As a student in the 1970s, his entire life centered around the library. Every time he finished lessons, he would go there, wait for the librarian, hand over the book he was taking out and his membership card, and then return home and start reading.

Today, Bunjaku is teaching mathematics in the same village, at the school which shares a courtyard with the library where he spent his studious adolescence. Yet today, nothing resembles the past.

The Kadri Zeka school in Desivojce currently has only 44 students. In 2000, there were 355 students, but due to a lack of infrastructure and institutional care, as well as harsh economic conditions, the village has become almost empty, with residents migrating. 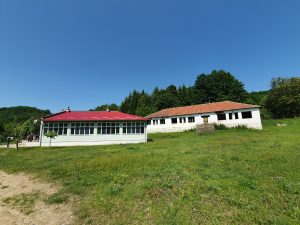 The Kadri Zeka school in Desivojce shares a yard with the library. Photo: Agon Sinanaj.

“Almost everyone has emigrated from the village, some to the city and some abroad,” says Hanife Ferizaj, the principal of the school.

Few students are seen in the schoolyard, not more than ten. Once the children see visitors, the games stop, and a kind of bewilderment crosses their faces. According to the math teacher, several months can go by without seeing a new face in the area.

The library has seen a similar decline. “No membership cards are issued anymore in the library. There is no librarian either. The library needs investment in order to carry out some repairs in there. As you can see, the books are in danger of being damaged too,” says Bunjaku, gesturing towards the large number of books stacked on the shelves.

In addition to scientific books, there are also works from great writers of the 20th century. The collection includes Goethe’s “Faust”, Franz Kafka’s “The Castle” and Albert Camus’ “The Stranger.” “Back then, we read literature, too,” says Bunjaku, with a hint of remorse in his voice.

The resistance of the Desivojce Library

The Desivojce Library was established in 1962 by the inhabitants of the village. Once the library held 10,000 books, employed a librarian, and was frequented by residents of the surrounding villages.

Back then, for the people living in Desivojce, the library meant everything. The 1960s were a difficult period for Kosovo Albanians; stripped of the freedom to express their nationality and with few opportunities for education in Albanian, many thousands left Kosovo, mostly to Turkey.

Bunjaku says that the library helped the village resist the struggles and restrictions on education of the 1990s too. In March 1989, as a province within the Yugoslav Federation, Kosovo’s autonomy was abolished and consequently, thousands of people were dismissed from their jobs. Later, a parallel system of education was launched across Kosovo after all public educational institutions in Kosovo were closed to ethnic Albanians.

In 1993, together with his school colleagues, Bunjaku established the ‘Isa Boletini’ Artistic Society through the library, the group putting on cultural performances and activities for the school day. “We miss that time. All of us,” Bunjaku says. “In our village, we had both a singer and an instrumentalist. As much as we are happy, we are sad at the same time as we are aware of the situation we are in today.” 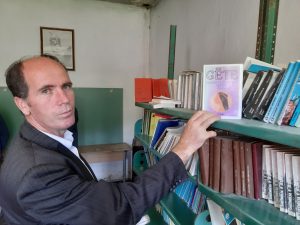 Alisahit Bunjaku who has been teaching mathematics for years in Desivojce is nostalgic about the reading culture in his village. Photo: Agon Sinanaj.

Now, the cultural life of the village is almost unnoticeable. Bunjaku says it is regrettable, especially now, as “we are those who lead the state.” However, that state’s care towards its libraries and reading more generally is missing.

According to official statistics, Kosovo invests a modest amount of money on libraries and activities related to books and reading. In 2018, only 56,000 euros were allocated to libraries by the Ministry of Culture, Youth and Sports, MCYS, while only 160,000 euros were allocated towards books and reading activities. The same totals are foreseen for 2019.

Osman Gashi, Head of the Communication Office at MCYS reveals that the ministry’s funding is mostly spent on books. “For the year 2018, MCYS supported the purchase of books as per libraries’ requests in order to supply 30 municipal and inter-municipal libraries with a total amount of 56,000 euros. All editions of books supported by the ministry are distributed free of charge to libraries all over the country,” he said.

Out of the 160,000 euros which were allocated in 2018, a total of 53 publishing houses were supported. However, there is modest support when it comes to translating works by foreign authors, with only five publications receiving support within this category. 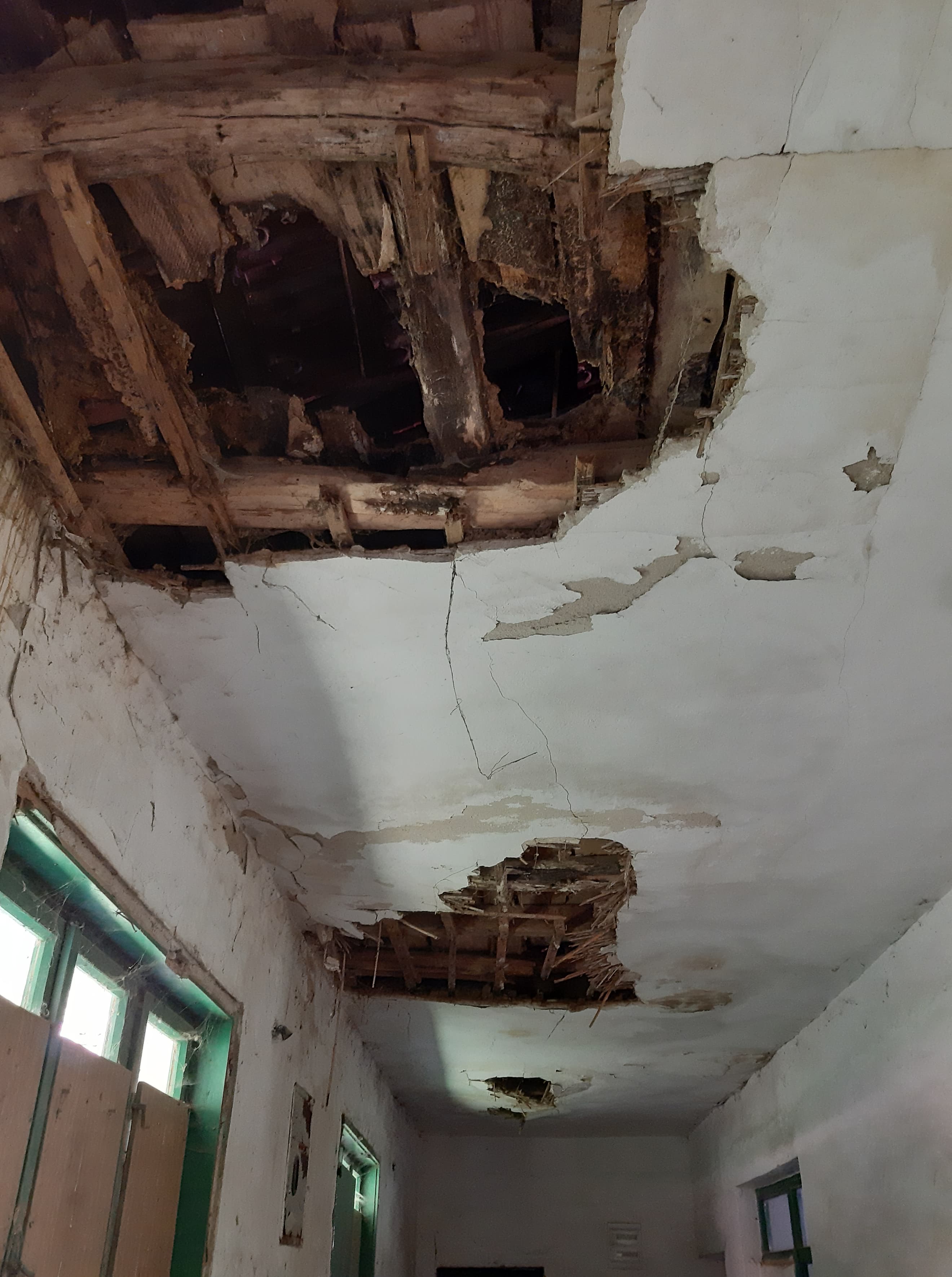 The spaces in the library of Desivojce. Photo: Agon Sinanaj.

But the problems in Desivojce are not the levels of stock but the maintenance of the building, a responsibility of the local municipality. BIRN has addressed questions to the Municipality of Kamenica asking to know the reasons why this municipality has so far done nothing for the library in Desivojce.

Up to the publication of this article, no reply has come from municipal officials despite promises to do so. The serious condition of the library risks closing it down, and it would not be the first library closed in Kosovo.

Dozens of libraries closures over the last decade

Since Kosovo declared independence in 2008, over 50 libraries have closed. According to a 2017 report from the Kosovo Agency of Statistics, KAS, there were 165 libraries in the country in 2007, while the latest data for 2017 gives a total of 107. The municipality of Prishtina leads with the largest number of closed libraries during this period. In 2007, there were 57 libraries in Prishtina, today there are only 13, a loss of 44.

BIRN has examined KAS reports from over the years searching for new libraries opened during this time. In total, within these ten years, just five libraries have been opened, one each in the municipalities of Klina, Obiliq, Peja, Zubin Potok, and Zvecan.

Statistics from the region and beyond show just how few libraries exist in Kosovo comparatively. Even in states with smaller populations, the number of libraries is far larger.

In Montenegro, which has just over 600,000 inhabitants, there are a total of 300 libraries, nearly three times more than the amount in Kosovo. In Estonia, which came out first in Europe in the PISA education assessment and has a population of 1.3 million people, there are over 500 public libraries and over 400 more school and technical libraries.

Ag Apolloni, a writer and professor of literature at the University of Prishtina, considers that the decline in interest in books has an explanation, which according to him is already known by all.

“A society has a culture of literacy when it has a solid grounded education. We have failed as far as the education system is concerned and this is a well-known fact,” says Apolloni, adding that the same situation prevails at all levels of the education system. “The university could not manage to prepare readers because most of those enrolled for studying have not read even a single book.”

Apolloni’s claims are certainly given credence by the 2015 PISA test results, in which Kosovo students aged 15 years performed the worst in the region, as well as among the lowest five in the world rankings.

The results of Kosovar students were disappointing generally, but especially in their ability to think critically: 77 per cent of Kosovo-tested students did not achieve the minimum reading skills, meaning they do not understand the main idea in a text, and are unable to elaborate a summary within a limited part of the text.

Apolloni believes that reading is not valued in Kosovar society today because “it is not an act through which you are enriched or popularized,” he says. “Reading will not bring ‘fans’, ‘likes’, or ‘clicks.’ It is an individual act, an intellectual act, and therefore unpopular in the age of appearances. Today, it is important how you look, not how much you know.” 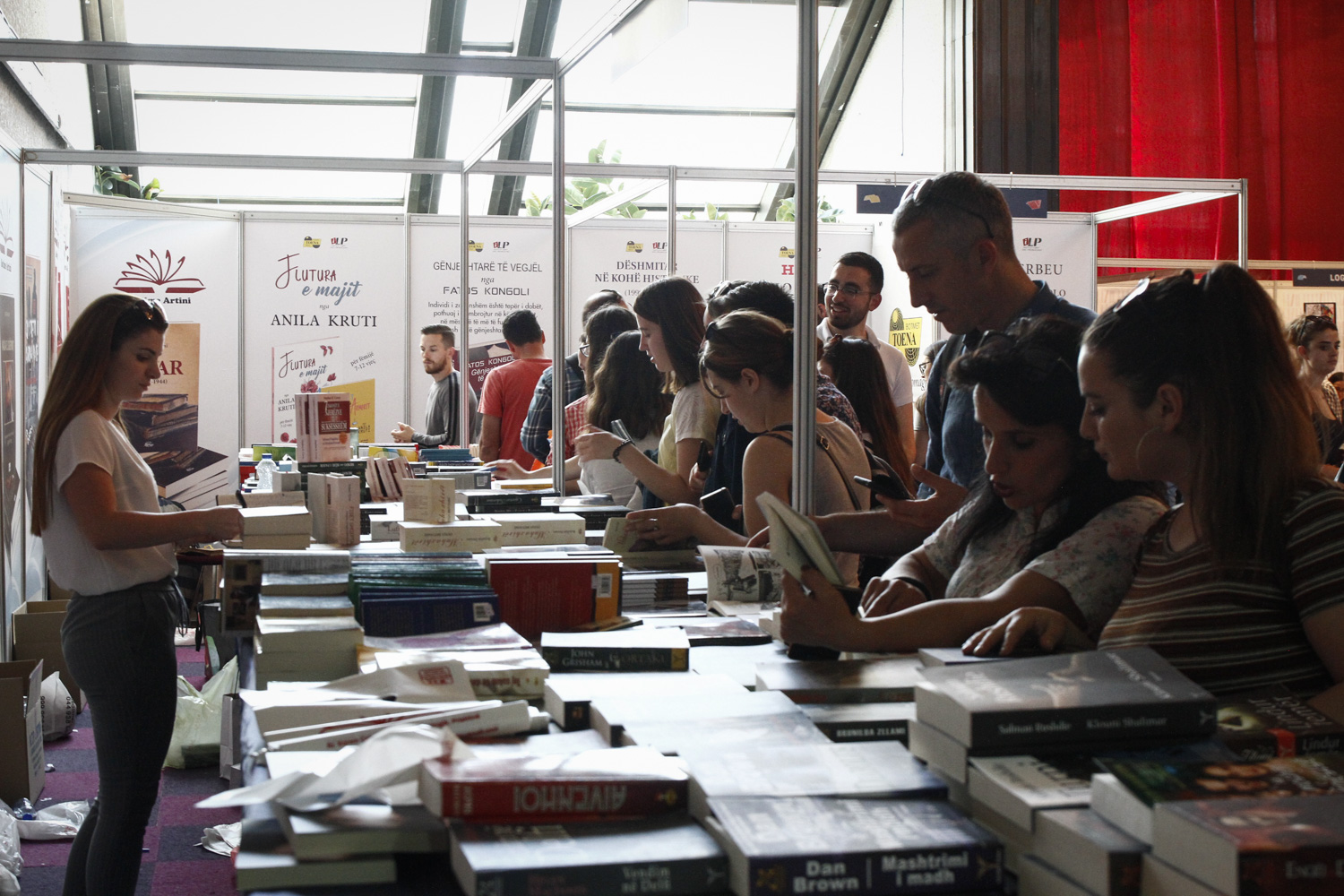 Lifelong student of philosophy Ardian Batusha also feels that contemporary culture has devalued books and reading’s place in society. “Regrettably, today we are living in a time when the market and marketing is increasingly dictating our daily choices, and we did notice that even in the field of books and culture,” he says. “We are being served books that are more popular and commercial. This reality, which I would call a reality of the market, is one in which masterpieces and great masters of speech and thought are left in the shadows.”

As a response to this, Batusha founded the Center for Philosophy and Art, one of several independent cultural centers established in place of state-supported bodies in recent years. The phenomenon is especially prevalent in Prishtina, and aims to raise awareness around reading.

According to Batusha, a reading group that is young, passionate about philosophy and literature and debate for hours operates within the Center. The reading group was established in 2017 and so far have held round 15 discussions on various literary and philosophical works.

Some of the authors and writings include: Friedrich Nietzsche’s work “Thus Spoke Zarathustra”, Albert Camus’ “The Stranger”, Jean-Paul Sartre’s “The Wall”, Herman Hesse’s “Siddhartha”, Ernest Hemingway’s “The Old Man and the Sea”, and Fyodor Dostoyevsky’s “Crime and Punishment.”

But while in Prishtina independent groups have managed to fill the gap left by the state, in Desivojca many of the same works sit in a library that faces closure, as more than 53 libraries in independent Kosovo have before it.

by Visar Prebreza
Next: News