Why aren’t we angrier?

In Kosovo, the more dreadful the experience of giving birth, the more heroic the mother. But we should stop normalizing traumatic experiences. Instead we must demand better treatment.

About two months ago I became a mother. My partner and I welcomed our daughter Luna and we began the joyous but difficult journey of parenthood. I had a smooth pregnancy with no complications and despite the general discomfort and challenges that accompany every pregnancy, I can honestly say that I did enjoy being pregnant, growing a human inside me as well as experiencing how my body changed and adapted during such a significant biological process.

I did struggle with the idea of giving birth though. To me, natural birth was an extreme process that I thought I could never go through.This fear of mine, however, was not an irrational one. It derives from living in a country where women’s reproductive rights are awfully violated.

The maltreatment of women in the public hospital known as QKUK is no news. Women have died during birth due to the irresponsibility of the medical staff, started the delivery process in the hospital hall while being verbally abused by  the nurse, were slut-shamed by nurses, and made to share a bed with other women after giving birth. They  have endured many more violations one couldn’t fathom but which happen on a daily basis without anyone being held accountable.

Nonetheless, every woman I know who has been pregnant and has had a  baby seemed thrilled to have become a mother and describes it as the most important, wondrous thing they have ever done. Stories about women giving birth in even the most difficult circumstances are commonly told in a romantic manner, emphasizing  motherhood as the most noteworthy status of womanhood.

It seems like even the most horrific birth and post-partum experiences are normalized in Kosovo; the more dreadful the experience, the more heroic the mother. We are taught that giving birth is one of the heroic deeds that a woman can do – a rite of passage which shapes the stories that women live to tell.

In Kosovo the more dreadful the experience, the more heroic the mother.

For example, I had no idea that breastfeeding would be so challenging. “I know it hurts, but that’s why you’re a mother,” my mum said while I was struggling with intense pain while breastfeeding my daughter in the first two weeks after birth. And she said this with the softest face and the most loving voice. She was herself in great pain when she had me, her nipples were torn and bled horribly  when she breastfed me back in 1986. And even though the other women in our family insisted that she should stop, she did not give up.

I didn’t quite know what to think whenever I came across campaigns that encourage mothers to breastfeed, stuck between parental responsibility and personal choice of women. But now I realize the hypocrisy of such campaigns when one considers the fact that in Kosovo women are encouraged to breastfeed, and even made to feel guilty when they don’t, but there is no actual lactation help provided to women. At the same time, there is little interest in recognizing the fact that the reason why many women return to formula milk is often due to the lack of lactation care and guidance on how to breastfeed and how to deal with the pain and complications that I personally had no idea might be involved breastfeeding.

But the lack of proper humane and medical care is not the only serious issue mothers deal with. Post-partum celebration is a must. The house is full of family members and relatives, friends, closed ones and even neighbors, who come to visit you with baklava and other desserts. There is no sense of privacy whatsoever, and as a bride, a wife and a mother, you are expected to behave gracefully and joyfully even though all you need is to eat, rest, get household help and bond with your baby. Oh, and lest I forget the unsolicited advice by everyone on how to take care of the baby is endless. 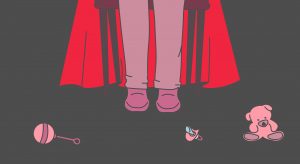 Postpartum depression and ‘baby blues’ are almost nonexistent notions in Kosovo. For the women who claim to go through emotional hardships after birth, ‘spoilt’ or ‘weak’ is the term used. They are disdainfully called  ‘depressed’ because simply blaming everything on hormones looks like the easiest way to deal with a woman’s post-partum state.

After becoming myself a mother and experiencing the pain and hardship myself, I couldn’t stop but thinking–why aren’t all of us angrier? How come you don’t hear women who go through dreadful birth and post-partum experiences complain and demand better treatment? While many have no choice or safe space to raise their voice or even scream their heads off, others can and we should do that on behalf of all of us.

I did know that becoming a mother would not be easy and that pain was inevitable, and yes, in the end worth it. But, a horrific experience it is not, and yet we should never choose to normalize it and romanticize it. My baby girl is wonderful and I look forward into guiding her and helping to shape her development. To me, motherhood means first and foremost parental responsibility and ultimate care for my daughter. But, I completely reject the notion of ‘heroic motherhood’. I have no interest whatsoever in proving to anyone how strong I am, nor in embracing the myth of the  mother that can bear all burdens, with a big smile on her face to boot.

The chatter on the greatness of motherhood is welcome but only after practical help is provided.

Instead of sentimentalizing motherhood and normalizing even violent birth experiences, I suggest we start sharing our stories for what they are. An honest discussion about the difficulties of pregnancy, birth, breastfeeding, and post-partum depression might even help revolutionize the issue of reproductive rights for women. And that would be demanding full access to reproductive care and services, as well as decent institutional treatment. Let us demand birth classes to prepare physically and emotionally for labour and delivery, birth options that work best for women individually, proper doctors and midwives, certified lactation experts as well as concrete policies for paternal involvement. The chatter on the greatness of motherhood is welcome but only after practical help is provided.

Some of us have paid in order to receive essential care in private hospitals. But the majority of women in Kosovo have no choice but to step into the horrific space of QKUK and get the maltreatment of their lives. It should be our priority as women to no longer allow for this topic to be treated as ‘women’s talk’. It is a political issue and if properly addressed, it could radically change things for the better.

Let us get angrier and angrier until both the medical world and society at large experiences a mental shift in how they perceive and treat women and their bodies. Until then, let us raise angry daughters as well.

by Amire Qamili
Next: News