Teenage poets from Kosovo and Albania gather for a night of electrifying slam poetry, a novelty to Prishtina’s literary scene.

Teenage poets from Kosovo and Albania gather for a night of electrifying slam poetry, a novelty to Prishtina’s literary scene.

Over a hundred young people assembled at the auditorium of the American School of Kosova on Sunday afternoon to listen to original spoken word poems by their peers from around Kosovo and Albania, evaluated by a jury. Issues of sex, sexuality, gender, sexual harassment, oppression, and love were addressed in the lively performances.

Kosovo Slam Poetry, an initiative by Kosovar alumni of the Kennedy-Lugar exchange program in the United States, offers a platform for a dozen young people to showcase their artistic talent and creativity through poetry. Being the only one of its kind in the country, this student initiative aims to address issues faced by young people while also confronting social taboos, says co-organizer Rine Fetahu.

“After returning to Kosovo from our exchange in the US, my friends and I were thinking about how to effectively target social problems in a more creative way, something that would capture the attention of the public. We thought of slam poetry, a rather unexplored art form in Kosovo, received a grant, and organized our first event,” Fetahu said.

Their first slam poetry event was organized in 2015, with performers chosen through an open call for participation. According to Fetahu, this year’s event drew an even bigger response from the youth of Kosovo. 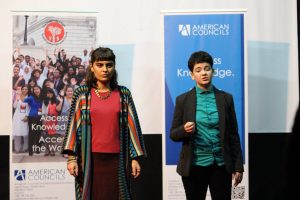 “Last year, we did our best to spread the word as much as possible, but the concept of slam poetry was much less known here. This year, there was a larger number of applicants and a considerably larger turnout of people,” Fetahu said.

Prior to the event, Fetahu said that they organized a workshop to engage the participants and create connections between them.

“Since the participants were sharing personal stories, we wanted to offer them a comfort zone where they can share their problems and inspiration while also learning about the similarities of the problems that they face,” Fetahu said.

Arber Selmani, a journalist, writer, and jury member in both editions, said that the initiative is growing, but the theme has largely remained the same.

“The courage of the participants to come out and convey their problems artistically has grown a lot from last year. There are people who have family issues, people who live in the closet, and girls who have experienced sexual harassment and body shaming. But what is great is that they are aware of the importance of emerging and and talking about their issues,” Selmani said.

The other jury members included writer Dafina Halili and Peace Corps volunteer Kate Wallner. They agreed that starting with this year, they will add a fourth place to the competition due to the high quality of the performances.

The winner of the competition was L. K., with his poem called “A mostly one-sided dialogue between homophobia and young queer kids.” The poem, delivered in cadence, was a powerful revolt against a system that blames the victim for its intrinsic homophobia.

“I mean I’m sorry. / I mean I didn’t ask for this either,” slammed Krasniqi, delivering his words in perfect English.  “I say stop. / Which is to say you have more power over my own struggle than I do. / To which you say fuck off. / To which I say I’m right here.”

The crowd erupted in loud applause as soon as he had uttered his last line. “Fuck, I’m staying.”