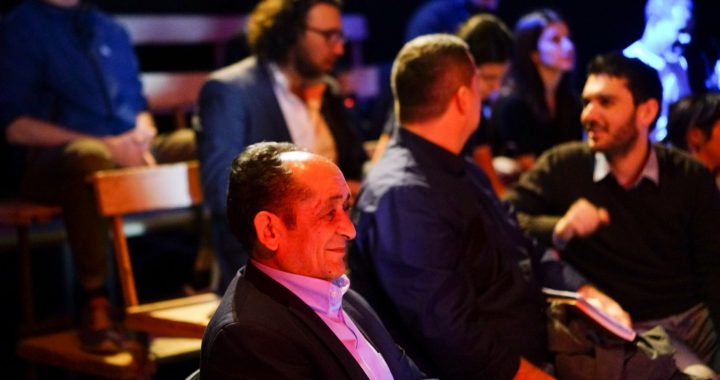 The playwright Jeton Neziraj remembers Kujtim Pacaku, a Roma artist, intellectual, poet and politician who passed away on May 17.

In 2002, the French director Dominique Dolmieu was coming to Kosovo from Paris to lead a Kosovar-French theater production. He suggested that a Roma writer from Prizren, whose name was Kujtim Pacaku, to join our writers’ team.

I had never heard of him before, but this was not strange since in fact, until then, I had never met someone Roma. When we spoke on the phone, Kujtim was reticent and hesitant. He would like to come, but… he said that since the war he had not been to Prishtina, and he was not sure whether it would be alright for him to come. Roma could not move freely yet. It was a time when we were high on the post-war freedom, which is why his hesitation and fear to come to Prishtina shocked me. I don’t want to cause you discomfort with my coming, he had said that day on the phone. But then he changed his mind when I wholeheartedly told him that I would fight to protect him.

I do not remember much from that first meeting in post-war Prishtina of 2002. But I can recall one thing that I will never forget: him walking with his eyes to the ground as we passed by the Philology Faculty. Disregarding other Roma who might have come to Prishtina after the war, either escorted by the police, the UN or other international organizations, it seems like Kujtim Pacaku was the first Roma to walk “freely” on the Prishtina streets. I, at least, am convinced he was the first. And thus we can say, perhaps metaphorically, that Kujtim was the first Roma to begin the liberation of Prishtina from the hatred and racism against the Roma, which had enveloped the country like the plague in the post-war period.

In Kosovo, the racism towards Roma is like that shirt you wear with pleasure everytime the occasion arises. But Kujtim Pacaku was a person who without a doubt contributed greatly to creating a different image of Roma people from the one of our stereotypes and prejudice. Kujtim did not play the flute or the drum, he played the piano. He sang, but not Romani songs from Emir Kusturica films; he sang beautiful choral songs, old city songs from Kosovo and beyond. Kujtim was not the illiterate Roma of our racist imaginary, he was a professor of music and later he finished a master degree in the field. Above all, he was a poet. He was not a poet who wrote romantic poems about Roma caravans, but an excellent poet who sang to the Roma and all of us who live in these parts. He sang to the downtrodden who strive for freedom, demand dignity and call for equality. He is one of the best poets in Kosovo, the author of dozens of books, translated in multiple languages and published in various international literary anthologies. He wrote both in Albanian and Romani, and besides these two, spoke five other languages.

With his death, culture in Kosovo has lost one of its most subtle poets, who left us with the most vivid, colorful and at the same time most tragic, depiction of the Kosovo Roma. The Romani culture has most surely lost its most important European poet of the 21st century.

Throughout the past 15 years, we collaborated dozens of times. He was an actor in our plays, a poet and writer in the any literary activities we organized at the Qendra Multimedia. He loved artistic creativity and never hesitated to take part in various activities, in particular those that had to do with Roma. He was open and had an extensive knowledge about Romani culture, traditions and the language. He was a generous man, wise and could never offend anyone, such rare virtues among the people of these parts.

Kujtim was a family man, he loved his family and worked to guarantee them a dignified life. But his real family were all the Roma in Kosovo, for whom he worked for in each and every endeavor, not only as a Kosovo MP, but as an artist and an intellectual.

Kosovo Roma have lost a worthy advocate to their cause for justice and dignity, they lost their most convincing voice who articulated their dreams in this Balkan space. The rest of us, we ‘gadjos’, have lost a worthy politician, someone who could be shown off every time we boasted about the social and political changes in this country; we have lost one of the best poets we had; we have lost the man whose mere presence gave this country hope; we lost one of the people who made it possible for us to see this country not only in black and white, as racists would have us, but in color and in beautiful nuance.

When we met a few weeks before he died, tired and overpowered by disease, when we said goodbye, teary-eyed, he told me “you were like my brother.” I believe this is the closest thing someone could be to him, and I was fortunate enough to be so.