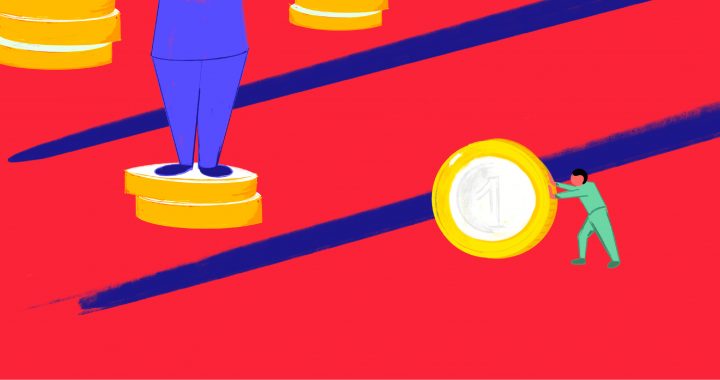 The economic emergency created by the pandemic revealed the state’s inability to provide support to those who need it most, with measures taken by the Hoti Government only exacerbating inequality.

Since its inception, Kosovo’s social policy has been designed to supply only minimal protection for citizens unable to be provided for via the free market or the family.

This low level of protection is mainly issued through benefit payments for poor families, disabled persons, the elderly and children that are either disabled, abandoned or in foster care – all tied to a poverty threshold calculated based on minimum food consumption.

Maternity leave compensation for working mothers is also provided, as well as a very small public infrastructure for pre-school child care, which is again targeted at so-called vulnerable groups. Meanwhile a low level of residual social work and monitoring is also delivered, including to children in violent homes and survivors of human trafficking.

Outside of this protection, the state foresees citizens gaining any further income and support from employment in the market, pension savings, private health insurance, and private or third sector services.

This policy was designed during the administration of the United Nations Mission in Kosovo (UNMIK), under the strong influence of other international organisations such as the World Bank and the International Monetary Fund (IMF), which were themselves influenced by radical pro-market ideological paradigms.

Of course, various layers of social policy (typically those benefiting groups close to governing parties, such as compensations for war veterans and teachers in the Kosovo Albanian parallel education system during 1990s) were added following independence, but the foundations of the system remain the same.

Over the last 20 years, this setup has produced one of the most unequal societies in Europe in terms of income. Kosovo’s Gini coefficient, which measures inequality of income, has been as high as 43 percent, considerably above the EU average of around 30 percent.

Benefiting the better off

Recent measures to tackle the economic impacts of the coronavirus outbreak have also represented a continuation of this policy, with steps taken doing little to treat the growing economic divide in Kosovo.

Nearly four and a half months after it was submitted to the Parliament, the economic recovery package eventually became accessible on December 5, 2020.

It enabled citizens to withdraw 10 percent of their pension savings from Kosovo Pension Savings Trust (KPST) and established two funds to provide financial support for businesses and citizens that lost their job as a result of the pandemic. Public guarantees were also made to ensure businesses had access to credit and various tax exemptions were granted.

According to the law outlining the package, withdrawals from all individuals with savings under 9,999 euros will be reimbursed by the Government from 2023 onwards. Based on KPST data, this means 91 percent of all contributors will be reimbursed if they withdraw their savings, while only nine percent have more than 10,000 euros total savings and thus do not qualify for compensation.

Most of the citizens within this group are likely to have been employed in the public sector, or at CSOs, or at larger, more profitable private companies. This means that financial support provided to the public through access to the pension fund – envisioned as COVID-19 relief – mainly benefitted those already better off in the employment market.

The package also allocated 200 million euros for financial support to businesses, but there were no criteria stipulated for the allocation of the funds. If the fund is allocated in the same way as the 60 million euros administered in late September, that is, based on the number of employees, it will again benefit the larger, wealthier private employers. The same logic can also be applied to the public guarantees regarding access to credit.

Another 30 million euro fund was launched to provide financial support for workers finding themselves unemployed due to the pandemic. Three monthly payments of up to 300 euros were made available for workers who can document that they lost their jobs between February 29 and December 30.

There have been no official statistics on the number of job losses as a result of the pandemic, but the value of the fund (30 million euros divided by three monthly payments of 300 euros) indicates that the authorities believe around 33,000 people have lost jobs. The value of the payment also represents much better income protection compared to the official minimum wage (170 euros which has not been updated since 2011), especially considering inflation.

However, neither this nor any other measures outlined in the law covers workers in the often precarious informal economy, which, according to the World Bank, amounts to 35 percent of the total workers in Kosovo.

Workers in the informal economy can neither qualify for the extremely targeted Social Assistance Scheme – unadjusted criteria for which have removed thousands of families’ benefits over the past decade – nor for the temporary measure put in place for the recovery package.

This punishment of workers in the informal sector is completely unjust, as informality is often a consequence of official policy. Around 85 percent of government revenues are financed by taxation on consumption and the provision of services. As such, the state has shown little commitment to providing for the labour market since it is not dependent on workers’ direct income tax and contributions compared to other countries.

At the same time, workers have no rational interest in insisting on formality due to the lack of public insurance (i.e. minimal pensions, sick-leave, and unemployment protection etc), while businesses can easily ensure a free ride due to the weak rule of law.

All things considered, the recovery package has punished families depending on more precarious forms of employment. These families have had to internalize the crisis by borrowing or reducing spending (including in important personal investments such as education), which will further impact their future conditions and social mobility.

It matters who governs

The pandemic has also shown that it matters which coalition runs the Government. Contrary to the delays with the economic recovery package, the first emergency interventions into the economy were undertaken more swiftly, contained better specified criteria, and reached substantially more of the less financially secure population by increasing poverty protection payments and creating new schemes.

For example, in late May, the Vetevendosje-led government stated that more than 116,000 workers had been compensated with minimal wages (up to two months), and another 44,000 were expected to be compensated. This measure alone must have reached at least 60 percent of employees in the private sector.

The Vetevendosje-led Government also published a detailed report in May on its expenditure, which unfortunately has not been continued by the LDK-led government since June – despite the dimensions of the crisis and the size of the government’s intervention.

Even more discouragingly, MPs have raised concerns in Assembly sessions regarding potential corruption committed through economic recovery measures, tax exemptions, and energy subsidies. If these concerns prove true, it will only add to the publics’ distrust of institutions.

As KPST data shows, even the 9 percent of contributors with above 10,000 euros in savings – who will therefore not be compensated – have applied for withdrawals in large numbers, perhaps not only due to pressing needs amid the pandemic but also due to large distrust towards government.

The pandemic has revealed many issues regarding social inequality. Firstly, we learned that most people have very low pension savings, largely due to unstable and precarious employment.

But we have also learned much more about the true depth of social exclusion – more than 60,000 applications were received in May when emergency measures installed a right to 130 euros for families with no other income from work or social transfers.

Providing financial assistance to endangered workers in an emergency also proved to be a slow process. If, for example, Kosovo had already put in place a more encompassing unemployment protection scheme, it would have had the necessary institutional capacities to provide support much more quickly.

2020 has shown that Kosovo needs a renegotiation of its social contract, with the state offering a more ambitious social policy that supports employment growth, inclusion and solidarity.

Some of the emergent measures – e.g. compensations for two monthly wages  for the newly employed plus contributions – had an immediate impact with nearly 5,000 applications received by May. The government should continue to utilize these policies after the pandemic.

This Spring, thousands of people were registered as unemployed for the first time (again due to interest to participate in emergent benefits), allowing future policymakers to work with more realistic unemployment figures. If employment protection, creation and support is pursued, many more of Kosovo’s citizens will be interested in activation in the future, and not simply written off as ‘economically inactive’ in official data.

Sadly, the reality check of 2020 showed that most political forces stand behind the status quo on social policy, which produces and maintains high levels of inequality, social exclusion, and dependence on the ready-made solutions of the ideological police – the World Bank and the IMF.

Artan Mustafa, PhD, is a social policy researcher. You can read his various publications through his ResearchGate profile.