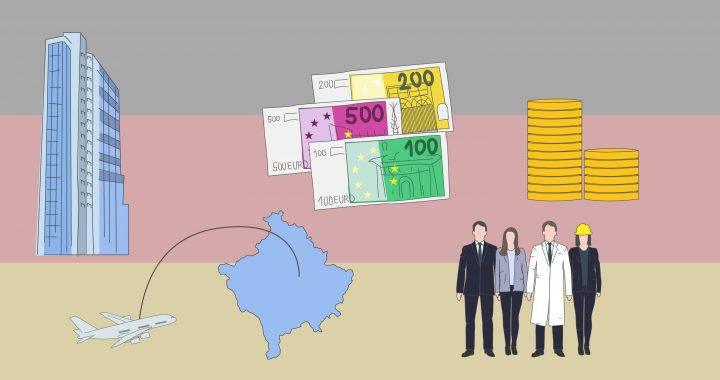 The involvement of Albanian intellectuals from the diaspora in mapping out government policies and supervising their application in Kosovo would lead to a better utilization of material and human resources in the country.

The Albanian diaspora should be treated as a powerful asset for the Republic of Kosovo. The government of Kosovo should create a task force with diaspora professionals, with the aim of drawing up government policies and ensuring that they are applied in real time.

There are about 500,000 Albanians from Kosovo, Albania, and Macedonia who live in Germany. It is believed that the first groups of Albanians that migrated to Germany started in 1968.

They integrated into society by working different types of jobs, mostly in the industrial sector. Political changes and developments in former Yugoslavia in the 1980s and 1990s caused even more Kosovo Albanians to leave for Germany.

Kosovars are still leaving their country

By the end of 1999, the number of Kosovo Albanians in Germany was 480,000. After the war about 100,000 either returned to Kosovo voluntarily or were forcefully removed from Germany.

This figure changes all the time, because Kosovars still want to leave the country, especially those who want to go to Germany, mostly for work purposes but also to seek asylum.

According to official data, about 2,500 individuals have sought asylum in different countries of the world in the first half of 2018. Hundreds more continuously wait in front of embassies in Prishtina, making efforts to obtain visas, considering that our country is isolated and our citizens need to wait for many months even if they are only visiting as tourists.

This is caused by the grave economic situation and a high rate of unemployment in Kosovo, but also by inadequate government policies with regard to the needs of the country and its citizens. This situation has persisted for many years, in spite of the fact that it has been 19 years since the war ended, and 10 years since Kosovo was declared independent.

Members of the Albanian diaspora have given their contributions every step of the way. They continue sending remittances. According to Kosovo’s Central Bank, in 2017, the remittances sent to Kosovo were worth 760 million euros.

If one does a modest calculation on the scale of the remittances that entered Kosovo in the 19 years after the war, it would give us a figure of 15 billion euros, as much as Kosovo’s state budget in the past 10 years. But, how much have remittances helped in the development of Kosovo? Or, did they cause part of Kosovo to be socially dependent on the diaspora?

Despite the contributions in Kosovo, many Albanian immigrants have built successful businesses in the places where they operate. In Germany, there are some Albanians that are already well-known in the German and European market.

The Union of Albanian-German  Businesses has continued to identify successful Albanian businesses in Germany since its establishment. Their success could not have been achieved were it not for the excellent business development ideas and the diligent application of laws and legal regulations of the German government.

I think that it is precisely the discipline of Albanian immigrants in Germany regarding the law of the country that influenced the German government to offer support for Kosovo in its most critical days. The German government and many other German organizations have supported and continue to support development in Kosovo even today.

Kosovo has drawn up and approved laws in full harmony with EU member states, but it is unfortunate that these laws are not applied because of many irregularities and other factors. Kosovo institutions have not been able to build credibility among citizens — they have really only deepened the crisis. Corruption and organized crime have paralyzed the normal functioning of the state.

In many developed countries, Albanians lead dynamic lives, being well organized time-wise and work-wise, and have also reached the necessary level of education for their occupation, especially among the newer immigrant generations. Thus, they are the best people to lobby for the needs and the situation of the people of Kosovo.

Diaspora: a bridge of friendship between Kosovo and other countries

For this reason, it is time that Kosovo changes its attitude towards diaspora members. Through them, Kosovo will strengthen relations with other countries in its citizens’ interests. Even though there has been a better communication between Kosovo institutions and diaspora representatives, there is a lack of clear and sustainable strategy for the engagement of the diaspora beyond remittances. That is why this communication needs to expand and be complemented with tangible development plans.

The Kosovo diaspora has always been ready to mobilize at any time and for every need and emergency that has come up. During all events important for the nation, Albanian immigrants have reacted first. For this reason, they are ready to help with the solving of the economic and political crisis so that new opportunities are created for Kosovo citizens. Diaspora intellectuals are a valuable resource to help the Kosovo government make better government policies, especially regarding the relationship between Kosovo and its diaspora.

The improvement of this relationship is very valuable now, when Kosovo expects to obtain visa liberalization. Kosovo needs to create an identification system for every person that currently lives outside of the country, in order to  secure correct movement when they enter and leave after visa liberalization. Thus, Kosovo would create a better and more correct image of itself regarding the fulfillment of standards that are required by the European Union.

So far, the Albanian diaspora has not been involved in the drawing up of government policies that would help the social and economic development of Kosovo. This involvement would help create better communication between Kosovo and other countries, in this case Germany, in order to bring investments from different fields.

The Kosovo government needs to treat members of the diaspora as an important asset. Albanian immigrants  with an intellectual structure from various occupations would create a task force that would push many processes forward. They would need to have a special space during the planning of the policies in order to be involved as fairly as possible, and then showcase their performance through an action plan with specific objectives.

In this case, the Ministry of Diaspora and Strategic Investments  is drawing up a new draft law where it will include strategic investments in Kosovo. One of the most important segments that the draft law allows for is the space for projects from priority development sectors which contribute to economic development, employment, and the application of new technologies.

This would give the Kosovo economy an increased competition ability, increased exports and decreased trade deficit, which influence the improvement of welfare and quality of life for Kosovo citizens.

Kosovo has many investible resources that would lead to profit in the short-term. Kosovo needs a different education system, better governance and rule of law, a competing economy and market, for a newfound attention towards resources in mines and energy, for a review of arable land and sustainable investments in it, for water resources and forests, for a planned industry, for a new and sustainable state system.

All of these fields have open possibilities for investments. One could draw up plans and strategic investments for every one of them. The Albanian diaspora has successful experience in every one of the fields. Its representatives could also bring foreign experts to study the investment plans in detail.

Thus, the involvement of Albanian intellectuals from the diaspora to map out government policies and supervise their application in Kosovo would lead to a better utilization of material and human resources in the country.

Kosovo institutions should very soon form a joint council with diaspora intellectuals that would identify and follow every development, starting from administration, which still does not function well, to menial labor.

Kosovo’s diplomatic service should be more up to date in order to attentively follow the possibility of expanding the network of Albanian intellectuals who live in other countries.

At the same time, the diaspora could mobilize well in the countries where they live. For example, instead of the remittances that they continue sending to Kosovo, they could organize the aid much better, turning it into a diaspora fund.

The fund would be gathered and allocated for investments in Kosovo. Those investments would create jobs for the youth and and consequently stop, or at least decrease, emigration from Kosovo!

This article is part of a series of op-eds published on Prishtina Insight as part of a project called the Engagement of the Diaspora for Policy Development from NGO Germin. This article was produced with the support of the Democratic Society Promotion, DSP,  project financed by the Swiss Agency for Development and Cooperation, SDC, and the Danish Foreign Ministry, DANIDA, and managed by the Kosovo Civil Society Foundation, KCSF. The content of this article does not necessarily reflect the views of donors and implementers.

Bekim Brestovci is the executive director of the Union of Albanian-German Businesses. He is an expert of international economic affairs and studied law.