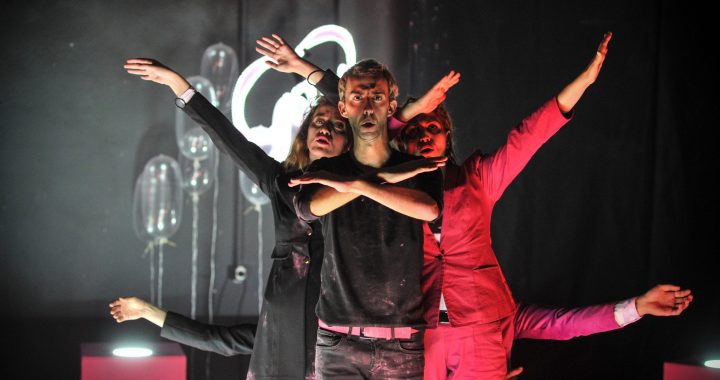 An event with five plays, two panel discussions, one world premiere and various guests, Qendra Multimedia’s theatrical showcase, the first in Kosovo, will exhibit the company’s dramatic productions from the last few years.

With plays hosted in numerous theaters and other venues around the Balkans and beyond, Qendra Multimedia, an independent theater company based in Prishtina, is organizing the country’s first theater showcase, presenting dramatic works produced by the company in the last three years, alongside two panel discussions and one guest play.

Jeton Neziraj, director of Qendra Multimedia, said that theater showcases are commonplace around Europe, and they are good opportunities to expose plays and other artistic productions to audiences and critics.

“It’s a very good practice, especially for theaters that have their own production and have ambitions to show it outside of their respective countries,” he said.

The three-day-long event will kick off at Oda Theater on Friday at 8:00 pm with the premiere of “The hypocrites or the English patient” by Neziraj, a comedy that centers around the healthcare system in Kosovo and its relationship to capitalism and neoliberal policies in the Balkans.

According to Neziraj, the play explores the so-called “stent scandal,” a bribery affair that involved dozens of doctors and politicians in Kosovo, as well as the “Medicus case,” where two Kosovars were convicted of illegal organ trafficking.

“The six characters humorously tell us about the massage parlors in the Balkans where they offer happy endings, about the illegal transplant of kidneys and about the deceiving stent operations,” the snippet reads. “In ‘The Hypocrites…’ the public will see the ‘pornographic’ side of a society that is practicing a collective happy ending.”

Neziraj says that there were attempts to organize showcases between Kosovar and Albanian theaters, as well as among theaters in Kosovo itself, but they were all met with difficulties.

“It was complicated for logistical reasons. We started it off as a Kosovo theater showcase, but we saw that it was quite an ambitious task for the first edition. The other problem was that not every play had a translation in English,” Neziraj said. “Another problem, an unofficial problem, was that Kosovar productions are primarily made for a local audience, and festivals are not interested in that.”

The second play, “55 shades of gay,” which premiered in September 2017, also written by Neziraj, deals with LGBTI politics in the Balkans, telling to story of a gay couple that decides to marry in a deeply homophobic town, around the same time when a condom-manufacturing factory is built to alleviate unemployment. The cast is composed of five Kosovo actors, and it will be performed at the National Theater of Kosovo on Saturday at 8:00 pm.

“Intellectuals, artists, politicians, religious leaders and professional grenade launchers try to stop the marriage from happening, despite the fact that same-sex marriage is permitted by the country’s constitution, which the prime minister signed according to EU instructions,” the snippet reads.

On Sunday at the national theater at 4:00 pm, the showcase will present “A play with four actors and some pigs and some cows and some horses and a prime minister and a milka cow and come local and international inspectors”, another production by Qendra Multimedia, focuses on four actors who switch between roles of local Kosovo butchers, international and local Kosovo government inspectors, and farm animals.

The play is directed by Blerta Neziraj and was originally said to be written by “a local cynic,” who was later found out to be Neziraj himself. He said “they discovered it was me…  [I didn’t do it] for any specific reason, but I wanted to see if my cynical style had become identifiable.”

Performed abroad in multiple countries, including Germany, Switzerland, Croatia and Serbia, the cast of the play was not able to go to Timisoara, Romania due to visa issues earlier this year, sparking a debate on artistic exchange between Kosovo and the EU, especially after Neziraj was decorated with the “European of the Year” award by the EU office in Kosovo around the same time.

The other two plays, Neziraj’s “Peer Gynt from Kosovo,” which tells the story of a man in pre-war Kosovo who leaves for Europe in search for a better life, and “Le Pont,” a French play based on Albanian writer Ismail Kadare’s novel The three-arched bridge, will be performed on Sunday at the Dodona Theater in Prishtina at 11:00 am, and at Ferizaj’s City Theater at 8:00 pm respectively.

The first panel discussion, which will be held at Qendra Multimedia on Saturday at 11:00 am, titled “Cultural Geography of the Western Balkans: Interaction Between the Aesthetical and Political,” will explore the relationship between art and politics in the Balkans in light of EU accession.

The next discussion, also hosted at Qendra Multimedia and titled “European Societies Reflecting on Critical Crime Novels,” will deal with the portrayal Balkan and Mediterranean countries in European crime fiction.

According to Neziraj, Qendra Multimedia’s goal is to have a theater showcase every year.

“There has never been this kind of collaboration between theaters in Prishtina, maybe in different contexts, but not of this nature. We will continue this tradition every year,” Neziraj said.

All plays, except “Le pont” will have English subtitles.

For further information on the program, follow the link.