Independent theater company Qendra Multimedia is set to premiere its play about gay marriage on Friday, bracing itself for potential backlash.

Jeton Neziraj is an agent provocateur. He is always pissing off someone with his plays: the last one titled “Bordel Ballkan,” directed by Andras Urban, drew protests and threats from veterans of the Kosovo Liberation Army, claiming it “denigrated the war of the KLA”. The former fighters also signed a petition and wrote ‘a damning’ review of the play, but the National Theater was nevertheless packed for every reprise.

The upcoming “55 Shades of Gay,” set to premiere this week, is no less ticklish. Directed by Neziraj’s long-term collaborator and spouse Blerta Rrustemi Neziraj, the play is an explosion of burlesque, music and possibly offensive humor; it is simply a riot. But, in tackling a taboo topic in Kosovo – the legalization of gay marriage – it might also just inadvertently cause one.

The couple’s sixth theatrical collaboration, subtitled “The Balkan Spring of Sexual Revolution,” is set in the fictive town of Tashanik, where a gay couple attempts to exercise their constitutional right of getting married. Chaos ensues. The town may be fictive but the legal context is not: an article of Kosovo’s Constitution guarantees equality for all, but the Kosovo Family Law clearly defines marriage as a bond between a man and a woman. It’s exactly this tension that the play uses as a jumping rope.

“We need to admit that we are dealing with a very homophobic society,” said Jeton Neziraj, the play’s author, alluding to the country’s conservative society, most of whom identify as Muslim. “It is impossible to say what will happen with the play when the LGBT community in Kosovo is invisible. The fact alone that a Prishtina bar that advertised itself as gay friendly had to close down a few years ago says a lot.”

In 2012, a group of conservative Muslims and hooligans mobilized to protest and stop the launch of Kosovo 2.0’s magazine issue about sex and sexuality. Perceiving it as an event promoting homosexuality, a few hooligans managed to get into the venue at the Palace of Youth, ransack the place, and even attack some of the organizers, while about 200 men protested outside in an attempt to stop “the sex party,” as some thought the event was.

Neziraj and the troupe had watched the video recordings of the attack recently.

“When I saw the videos it looked quite scary. Scary movie,” said Neziraj, laughing wide-eyed. “I don’t know if a lot has changed, I believe it has. But maybe I have the wrong impression.”

The play’s director Rrustemi-Neziraj is also ambivalent about how the play will be received, especially since after threats made before the premiere of “Bordel Ballkan,” Kosovo police had to ensure the safety of the audience and producers.

“I don’t think there should be reactions, because at the end of the day we’re talking about a theater play. However, considering other plays of Qendra Multimedia, which always draw a variety of responses, one can never say for sure,”  she said.

“Theater has the obligation to become the voice of the minority, of the powerless. A theater that takes the side of the majority, of power, is a propaganda theater and is turned into a worthless rag,” she added.

Neziraj’s plays, especially those directed by Rrustemi-Neziraj, are anything but propaganda: from “One flew over Kosovo theater”, a satiric take on Kosovo’s declaration of independence, to the more recent “A Play with Four Actors and Some Pigs and Some Cows and Some Horses and a Prime Minister and a Milka Cow and Some Local and International Inspectors,” the playwright and director dissect social and political issues with much gusto, resulting in raucous comedy.

“Neziraj’s plays directed by Rrustemi-Neziraj are political not in the classical sense, where we can see the faces of politicians on stage, but their stance towards social or political developments in Kosovo is political and reflected on stage,” explained Eli Krasniqi, anthropologist and writer. 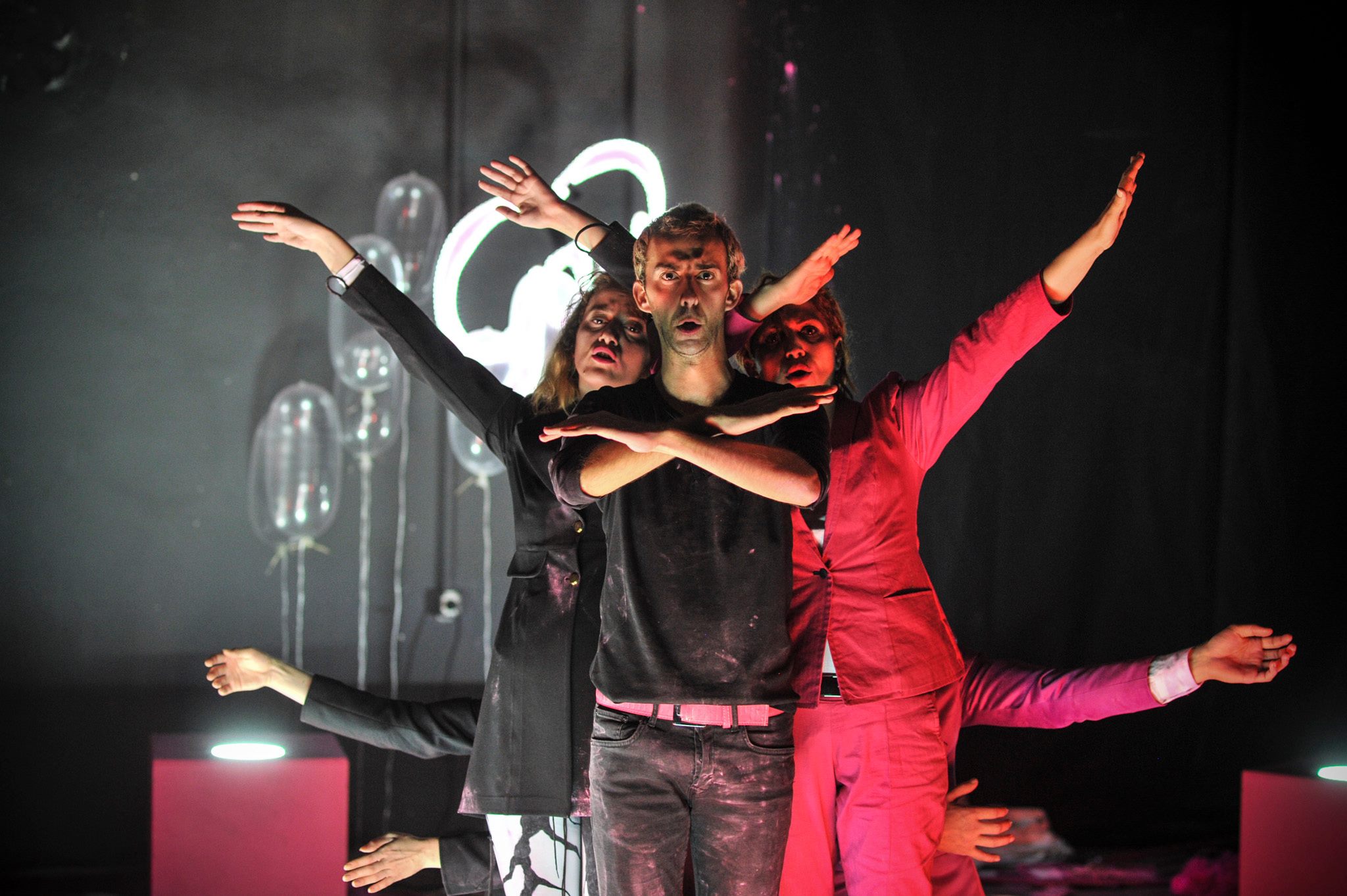 For “55 shades of gay” Rrustemi-Neziraj put together a team of five actors and the tenor Luan Durmishi, who will back up the actors during multiple music numbers. During rehearsals, the troupe was jovial as they learned the steps from the choreographer Florian Bilbao, humming along to the music composed by Irena Popovic.

“I cannot believe it – a gay parade in Tashanik!” sings the protagonist Merlin, played by Tristan Halilaj after his beloved, the Italian Adriano played by Bujar Ahmeti, tries to convince him that once they’re out in the open others will follow. “It’s like seeing a Muslim Pope in Rome!” the song continues.

“The play is not necessarily about the community itself, but politics surrounding the LGBTQ community. There’s a sort of [50 Shades of] Grey motif, a cycle of submission…we’re asking who is submissive to whom in this society,” Neziraj explained.

If something happens, we should just close down the theater and have a doll theater. Alketa Sylaj

But the play’s actual content and what it might represent to some are two separate things, even Neziraj has to admit. The people who could protest the play would most likely never even see it.

The poster of “Bordel Ballkan” was set on fire a few weeks after the premiere, and Neziraj can only hazard a guess what will happen to the poster of “55 Shades of Gay” which prominently depicts two men kissing.

Sylaj has experienced first-hand how a simple kiss can trigger ferocious hate. In 2014, Sylaj and her friends, the art collective HaveIt, staged a performance to protest the inequality of love on Valentine’s Day. The friends kissed each other on the lips in one of Prishtina’s main squares. The photo of the four girls went viral, with the artists getting death threats and people posting their home addresses online.

“We received so many threats we had to go to the police,” said Sylaj, who is a vocal LGBTQ-rights supporter.

“Even if something happens I’m ready to fight for this play, it’s something I believe in,” Sylaj said without batting an eyelash. “But if something happens, two or three times in a row, we should just close down the theater and have a doll theater, stop pretending to have a real one.”

Activists from the LQBTQ community suggest that the theater should prepare for the worst.

“From our own experience, I would say the organizers need to be prepared for anything,” Blert Morina, the director of Center for Liberty and Equality, CEL, explained. “ It could be that like in Kosovo 2.0’s case, there will be 200 people protesting. They could even turn violent.”

Morina is particularly worried about the backlash – after the incident in 2012, activists were afraid to convene. Two days after the Kosovo 2.0 incident, offices of LGBTQ activist NGO Libertas were stormed. Activists had to work from home for weeks afterwards.

At the same time, Morina is optimistic for a play that will push the issue of gay marriage–which is not a priority for LGBTQ activists in Kosovo, who are mainly focusing on improving the criminal code and fighting domestic violence–into the mainstream.

“People will probably react, but not because of the content. Even the title could be enough, which alludes to 50 Shades of Grey, which everybody recognizes,” said Morina.

“Many imams in their [YouTube] videos use such hateful language; I’m surprised they are allowed to do so,” Morina said, adding that as a provocation the show might still “reveal the real situation.”

Neziraj is more optimistic. Unlike in 2012, he argues, hateful language is not as blatant and this is partially due to a change in the way media report on LGBTQ issues. Besa Luci, Editor-in-Chief of Kosovo 2.0, agrees that media are more aware and have entered a different stage.

“Now we’re at a different terrain, where media and journalists need to understand and be knowledgeable about LGBTQ,” Luci said. “We need more education within the media.”

But while media might be more sensitive in their reporting, the situation on the ground might have not changed much.

For the past three years, LGBTI activists marched in downtown Prishtina to mark IDAHOT, but all of those events were invitation only. This year, plans to organize a public event failed because of the political crisis.

“This play really counts…Theater that is contemporary, that is very political, which will be fought against – this is how theater should be,” he said enthusiastically, before adding that in Europe the sense of struggle has been lost and now it is mostly about making “well-done things.”

“To hear that there are always policemen in front of the theater…that means something, even to me,” he concluded.

Sitting next to him, Neziraj joked: “After they kill you I promise I’ll name Qendra Multimedia after you.”

Without missing a heartbeat, Ellrich retorted: “That would be nice. I just need a little silver plaque.”

“55 Shades of Gay” premieres on Friday, September 8 at the National Theater in Prishtina. The first reprise is on September 9.

Documentary explores Kurrizi, the axis of Albanian social life in the ‘90s