Documentary explores Kurrizi, the axis of Albanian social life in the ‘90s

A documentary about a housing complex in Prishtina’s Dardania neighborhood, locally known as Kurrizi, will premiere on Thursday evening at Miqt Pub.

Perhaps Prishtina’s “Instagram generation” might find it hard to imagine that there was a time when students were not allowed to go to school or the university, were intimidated and discouraged to visit the national theatre or gallery, and were afraid to go to cafes and make their way back home at night. But for twenty-somethings during the Milosevic regime of the 1990s in Kosovo, this was a way of life.

A new documentary, chronicling the ‘90s in Kurrizi, the Prishtina hub central to Albanian social life during segregation, will premier in the Kosovo capital on Thursday evening.

Produced by Cultural Heritage without Borders, CHwB, the documentary–written by by Doruntina Basha and Arif Muharremi and directed by Orgesa Arifi–tries to deconstruct the social life of 1990s youth in Prishtina by focusing on Kurrizi – the place where they hung out. 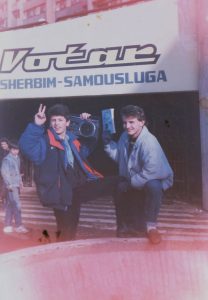 Kurrizi, a residential and commercial complex in the Dardania neighborhood, which was built between the 1970s and the 1980s, became a hotspot for the youth in the 1990s – especially for Albanians, who under the Milosevic regime were completely excluded from institutional and cultural life.

“Kurrizi was a meeting point and served as a ‘parallel cultural space’ for youth in the 1990s. We were interested in that and we wanted to talk to people who experienced it,” said Arifi.

The documentary, shot from October last year, depicts interviews with about a dozen people, mostly artists and public figures, who talk about their memories and what Kurrizi means to them.

“In Kurrizi I had my first gig. In Kurrizi I met other musicians, friends. Everything happened there,” the prominent jazz musician Ilir Bajri reminisces in the film. “But there were also days when it was totally depressing [because of the political situation]. Nobody did anything, the complex was empty. But there were always people who were enthusiasts [like BB Poqi and Babuka] who insisted to actually play music, do live gigs. We just had to make music I guess. I will never forget that.”

With photographs and home videos of live gigs, parties and concerts, the film introduces the denim jacket-wearing protagonists as youthful and energetic.

However, in its brevity, it does not manage to provide background information about the neighborhood’s construction or even its quizzical name, which in Albanian means spine.

For Arifi, public relations officer at Chwb, an organization that works with cultural heritage preservation, it is important to document segments of the past. 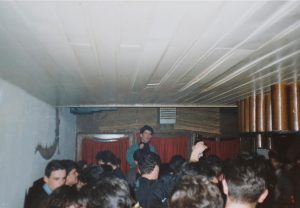 “We, as CHwB, thought that it is very important to document that parallel cultural life of people in the 1990s, and that it shouldn’t be forgotten,” she said.  “If nothing else, I hope the documentary will inspire people to think about the 1990s and act as a catalyst for debate and for preserving collective memory.”

The documentary ends with an insightful note by Albin Kurti, MP and founder of the biggest opposition party in Kosovo, Vetevendosje, who during Kurrizi’s heyday was a student union leader.

“To understand us today, you have to know us as we were yesterday.”

Kurrizi will premiere at Miqt Pub on Thursday at 8:00 pm, followed by a Q&A session with the producers and the director.