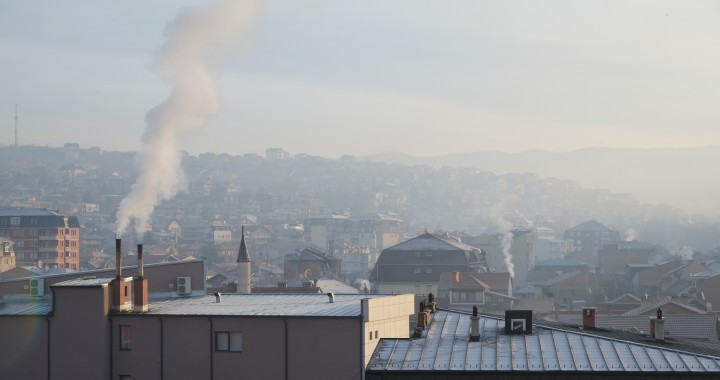 Once a land of humble dwellings, small roads, rolling fields, and ugly, but unassuming communist architecture, Kosovo has now become a giant roadside show of fleeting and fickle businesses and trades competing for a view of the passing traffic.

On a recent morning I walked on a rutted road, not far from Prishtina, across a patch of land, which, for a few minutes, might be mistaken for a stretch of bucolic paradise, but soon this pastoral tranquility is swallowed by overburden waste from a nearby open pit mine that, for decades, has vomited toxic sludge in the area.  At the opposite end, a silent railway frames the fields from a helter skelter civilization in a town overbuilt by heavy hands and ill-bred dreams. Buildings of various shapes and sizes have crept up, devouring the land centimeter by centimeter. Walking along the railway, kicking ballast absentmindedly, I observed the construction onslaught as exemplified in an abandoned warehouse whose tin walls had been ripped off and hauled away.

The corpse of the building stood on massive steel beams reinforced to the ground in cubical slabs of concrete that somehow looked like giant grey hooves. Inside the drafty space, the floors were littered with broken glass, discarded leathered sofas, clothes, warped shoes, barrow wheels, stuffed animals, a woman’s bra, car bumpers, other deracinated motor parts, and pile after pile of empty buckets of paint. While it looked as if this had once been a parking garage annihilated by a powerful explosion, it became clear upon closer examination that the warehouse had recently served as a place for mutilating or redressing stolen cars and vehicles, including a police van. A sanctuary of thieves honing skills of their trade. A graveyard of abandoned junk over which snails crawled and crows patrolled the sky above. Not far, a nearly empty highway promised distant destinations only to end abruptly somewhere between a trash-choked creek and some barren field a few kilometers west.

Once a land of humble dwellings, small roads, rolling fields, and ugly, but unassuming communist architecture, Kosovo has now become a giant roadside show of fleeting and fickle businesses and trades competing for a view of the passing traffic. Large swathes of country’s landscape have been mutilated, clawed, dug out, raped, and nightmarishly repurposed, as if this were an island of a species experimenting with cement and cinder blocks and steel and slurry. Where once stood poplars and elm trees perfuming the air and shading the roadside between towns and villages, now there is a shack to wash one’s car that spits out black soot behind, or a desperate motel alluring illicit fornicaters. Somewhere along the road, any road, a fenced plot with hundreds of rotting vehicles sinking into the earth is followed by a dusty, dark-windowed brothel that passes for a hotel with pretentious Doric style columns, named after a great European city.

Endless junkyards overflow with scrap metal, stacks of building material and thingamajigs spill on the sidewalk; hideous and amorphous half-finished monstrosities stand on desolate lots with cracked asphalt covered with rusting yellow dock, wild chervil, chicory, and thistles. More giant buildings loom everywhere. To the right and to the left, large shopping centers, dead or in the process of dying, rot in the sun. Kilometer after kilometer of devastation. A colossal and failed experiment. Nature, like common sense, has retreated deep in the shadows of some distant land. Here and there, one can spot tiny and terrified tree saplings, coated in soot and dust and already dying—a choreographed mockery of nature—tremble in a precarious existence in the street median between vehicles that groan under the tyranny of their owners who rush so madly as though it is their last day on earth.

Someone, somewhere, has called this economic development. Urban sprawl. Capitalism of some order. Countryside descending into town. Town absorbing countryside. Diaspora. Remittances. Claptrap. But somewhere and something has gone terribly wrong, for this is not “the gale of creative destruction,” as that great Austrian economist Joseph Schumpeter called  the process of wealth accumulation and innovation by way of constantly destroying the obsolete and building the new. If this is anything, it may simply be called the gale of great destruction.

Entire towns have been suffocated by endless and chaotic construction without any apparent control or sense of investment or market demand or respect for urban planning or environment. The face of the land, the streets of small towns, the neighborhoods, have been altered permanently. Drive through any of these towns and anger swells inside one’s chest at the sight of this monumental devastation where buildings have been stacked against one another like lego blocks, swallowing sidewalks underneath; trees and plants have become remote memories, small front gardens have been eaten by colossal shadows of hideous buildings; and cars, endless cars, everywhere, anywhere, scurrying, crawling, hooting, shrieking.

In a sense, some of this chaos was inevitable. Urban development has been a phenomenon of rapid globalization, movement of capital, technology and people from China to Africa, from Latin America to Europe, and all over the globe. The first decade of this century was awash in cash and capital fueled by low interest rates. A booming construction and real estate industry all over Europe and North America, where Kosovo migrants live and work, was the story of the decade. Following the Kosovo conflict, migrants poured their harvested cash into construction and retail industries, meeting some of the rising demand from population movements from rural areas to towns. A relative rise in the standard of living and purchasing power—at least for some small pockets of society or returning migrants—drove the investors to become ever more aggressive in the construction industry.

As any major sector that needs capital of all sorts—material, suppliers, et cetera—the surge in construction created all kinds of supporting businesses and supply networks that emerged everywhere, jamming the infrastructure, clogging the roads, overwhelming the environment, and turning  the towns of Kosovo into giant construction sites with shoddily constructed residential buildings that often look like chawls in the outskirts of some impoverished, remote city. All of this was facilitated by the ignorance or corruption of local policy makers who colluded with investors with plenty of cash, but not much regard for the environment or the small-scale nature of Kosovo towns.
The end result is that life in a typical town has become almost intolerable. The air is thick with smoke, toxins, and dust; infrastructure lacks the physical capacity and visionary leadership to create sustainable living spaces for families and their children who can be seen playing on the road since the sidewalks have been turned into parking spaces. The traffic is a dystopian nightmare.

The only escape from this seems to be in the deep countryside, with abandoned villages and hamlets lying inconspicuously among the rolling fields and hillocks. Rural areas have become the last frontiers of peace and quiet in this country—places where one can still breathe some decent air, hear the murmuring of a brook, the rustle of leaves, and collect a handful of cornelians or apricots along the lightly trodden pathways.