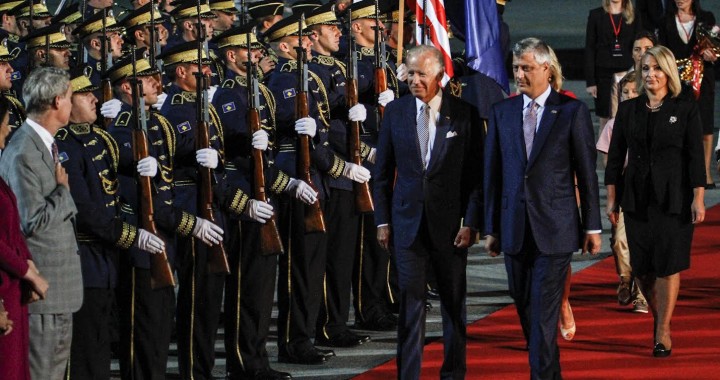 Biden arrived in Kosovo after a one day visit in Belgrade, Serbia during his last Balkan tour as Vice President.

A case that has been particularly present in discussions between Serbian and US leadership is that of the murder of three US citizens of Albanian origin by Serbian officials: brothers Ylli, Agron, and Mehmet Bytqi.

At a press conference in Belgrade on Tuesday, Biden expressed condolences to the victims of the Yugoslav wars of the 1990s, including those killed by the 1999 NATO bombing campaign against Serbia to end the Kosovo War.

On Wednesday, during a joint press conference in Pristina led by Vice President Biden and President Thaci, Biden also expressed condolences for victims of the Kosovo War.

“I know that the wounds of war are fresh. I have been in hospitals and shelters, I have seen your sufferings. But the only way Kosovo can go forward is by advancing reconciliation,” Biden said.

Thaci stated, “In that critical period, The United States, and concretely, Mr. Biden, became our voice, our hope.”

Thaci also used the joint press statement to call for the establishment of the Association of Serb-majority Municipalities, as signed by Kosovo and Serbia during EU-facilitated negotiations in Brussels, as well as for the ratification of the contested demarcation agreement with Montenegro.

“I want to be open in front of my citizens. Without the approval of demarcation and the Association of Serb Municipalities, Kosovo will remain isolated from the world and left aside from the US and EU,” Thaci said.

Both issues have led to opposition protests both inside and outside of Kosovo Parliament this year that have been strongly condemned by the US Embassy in Kosovo. Additionally, four protests against corruption and cronyism in Kosovo this month have called for the resignation of leaders from the ruling parliamentary group Kosovo Democratic Party, PDK, including President Thaci, after a wiretaps leak scandal known as the “Pronto Affair.”

The wiretaps were collected from an EULEX investigation on chief of PDK Adem Grabovci during his stint as Deputy Minister of Transport and Telecommunications between 2008-2011. On the evening of Biden’s arrival to Kosovo, Grabovci resigned from his position as Chief of the parliamentary group amid the scandal.

Biden’s final stop before departing Kosovo on Wednesday was a road naming ceremony to honor his late son, Beau Biden. Beau Biden worked in Kosovo soon after the 1998-99 war ended and passed away in May of 2015 from brain cancer.

Biden closed his visit by sharing his gratitude for the ceremonial gift.
“Because of your generosity, together with my family we will participate in the inauguration of the street that holds my son’s name. This visit has a special meaning for me and my family, my wife, my son’s wife and his children.”