“Pronto!” Kosovo protesters are calling for an end to corruption

Leaked wiretaps revealed cronyism in Kosovo institutions and led to civic reactions in Prishtina. Three protests have been organized this month and the fourth is set to take place tomorrow.

The organizers of #PROTESTOJ (I protest), who have held three protests in past two weeks, went in front of the headquarter of Kosovo’s ruling party Kosovo Democratic Party, PDK, on Monday to suggest a new name for the parliamentary group: the Pronto Department of Corruption.

The “Pronto Affair” wiretaps were collected from a EULEX investigation on head of PDK Adem Grabovci during his stint as Deputy Minister of Transport and Telecommunications between 2008-2011. In the leaked phone conversations, Grabovci appears as an important figure who calls ministers and other high officials and appointments party members to key positions in different independent agencies and state institutions.

The leaked wiretaps were not only surprising because of the potential party cronyism they convey, but also because of the banter between the politicians on the line. Some of the party members, such as Grabovci and even current Kosovo President Hashim Thaci, can be heard using some words in Italian even though according to their CVs, neither of them actually speak the language. When President Thaci received a call from Grabovci, he answered “Pronto!” before continuing to jokingly chat with Grabovci in basic Italian. Media in Kosovo related this with Italian mafia and have named the new scandal “Pronto Affair2.” 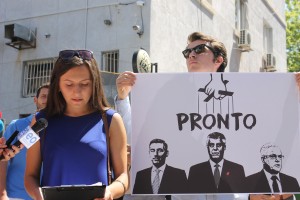 The protagonists have yet to speak on the matter, except for Grabovci, who soon after the leaks on August 1st stated in parliament, “it’s not a crime to hire people.”

Meanwhile in Prishtina, three protests with hundreds of citizens have taken place.

“They are imitating the Italian mafia, and this shows their will to install a mafia that controls the state, and it is our duty as citizens not to allow that,” Bajrami said.

This time around, the civic reaction seems to be serious, with citizens taking the lead to organize protests against corruption and cronyism. 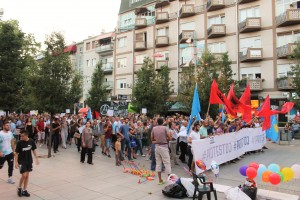 Two of the initiators of #PROTESTOJ, Saranda Sylejmani and Dardan Ibrahimi, were previously involved in different protests in Prishtina, such as those against the raises in electricity prices. But neither of them consider themselves to be politically or ideologically motivated.

“I was irritated with seeing that no one is doing anything. It made me think of creating a small platform for citizens which would serve as an organizing platform,” explained Ibrahimi.

“It was unacceptable what we have heard in the leaked wiretaps,” said Sylejmani, a woman in her late twenties who works in a marketing company. “These individuals are not decent enough to represent the Kosovo people, we must make them resign,” she added.

There are about 15 organizers of the protests, and the individuals each come with different profiles and backgrounds. The group is also horizontal in its decision making. 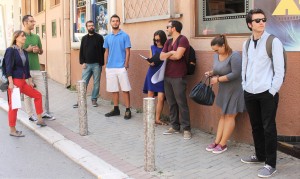 The organizers wait for a meeting with the media. Photo: Rron Gjinovci.

“The protests are organized from the citizens, with no political party or NGO or any other institution behind them. I must emphasize that the group has no leader or any kind of leading body,” said Sylejmani.

Ibrahimi, an owner of a pub in Prishtina, says that it is important that they “don’t have leading body in the group,” and adds that they are not going to need one.

The organizers publically call for people to join the group. “Every other input is important for our cause, in order for us to develop and grow further,” said Sylejmani.

The say they are not going to stop protesting until Grabovci and everyone involved in the wiretaps resigns.

“We will protest until the persons involved resign and go in front of justice,” Sylejmani stated determinedly.

For Ibrahimi, “it is a civic responsibility to fight the corruption.”

Is this revolt part of a regional movement?

The 2016 protests in Skopje known as the “Colorful Revolution” seem to have inspired the Prishtina protests. The hashtag used for the Skopje protests is the same – #PROTESTOJ in Albanian and #PROTESTIRAM in Macedonian. Wiretap leaks also initiated protests in Skopje, and the demands of each group of protesters echo one another. In both capitals, protests want the political leaders involved to resign.

But instead of paint being thrown at buildings and statues as was the case in Skopje, at the third Prishtina protest held on August 10, citizens threw toilet paper on the Government’s yard and yelled “Mut e keni bo!” (in english: “You have taken a shit on it!”). 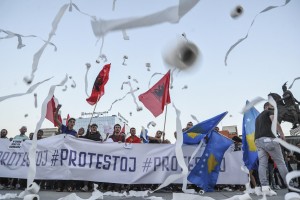 Vlera Gjakova, one of the organizers of #PROTESTIRAM in Skopje, was born in Kosovo and currently lives in the Macedonian capital. Gjakova is optimistic about the protests. “I strongly believe that a new civic awareness is growing in Balkans” she said. “We fight for the same cause in Skopje and in Prishtina, we have the same structure of politicians to fight against.”

“The Colorful Revolution let people know that Macedonia is not only dark, it also has colors. What #PROTESTOJ in Prishtina did is great. They broke the taboo that says that protests can not be organized in August,” Gjakova added, referring to the protests in Skopje that have stopped until September.

Protests in Prishtina have been supported by different political analysts and NGO leaders. Political analyst Imer Mushkolaj joined the group and is using his media influence to spread the news better.

After the third protest, media reported that three prosecutors are dealing with the wiretaps and that soon they are going to give a public report on their investigation.

The organizers are preparing for the fourth protest to be held on Tuesday, August 16. They meet in the city park or in the pubs to discuss the modalities of the next protest and its possible symbolic action. They collect money from their own pockets in order to cover small expenses for printing banners and posters. 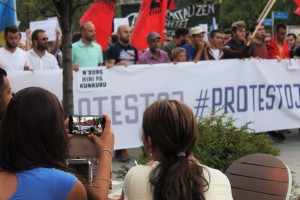 Kosovo is the country with the youngest population in Europe, while the unemployment among youth is at more than 50 per cent. Therefore, the #PROTESTOJ group is dominated by young people.

The youth are led by their ideals. Ibrahimi says that he dreams “every day for a healthy country, as we [the youth] are.”

Lumbardhi advocates: What’s next for Prizren after Dokufest?