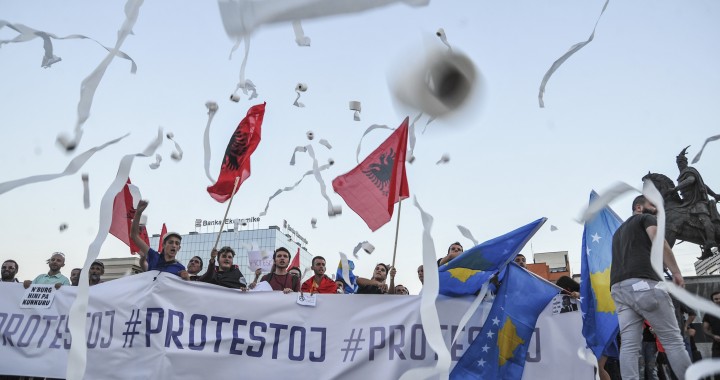 Leaked wiretaps suggest widespread cronyism among ruling party officials, yet protests against corruption have gained little momentum. What is to be done?

More than a week ago the Kosovar website Insajderi published leaked phone recordings between Adem Grabovci, the head of parliamentary group Democratic Party of Kosovo, PDK, and his fellow party members, including current President Hashim Thaci and Assembly speaker Kadri Veseli. The recordings were collected by the European Rule of Law Mission in Kosovo, EULEX, during an investigation into allegations of abuse of office by Grabovci while he was deputy minister for transport and telecommunication. Grabovci himself was not indicted, although after the recordings leaked, EULEX prosecutors have said that they will “review” the case. Yet the Kosovo State Prosecutor jumped the gun, and only a day after the first leak was published declared that the wiretaps do not indicate criminal content.

Back in 2013, a couple of the same phone calls were also leaked. But the Pronto Affair (as it was called back then) was a juicy peek into the private conversations of Grabovci, Thaci, Veseli and co. rather than an exposé on cronyism of the ruling party. In the newly leaked recordings from 2011 however, Grabovci appoints board members, weeds out non-party affiliates in open calls, and influences appointments in ministries and independent agencies. Soon after the leaks appeared on August 1, Grabovci retorted, “It’s not a crime to hire people.”

All of this laid heavily on my mind as I walked around the old city of Prizren while clutching my newly purchased Dokufest tote with the inscription “Corrupt Prizren,” alluding directly to the city’s mayor, Ramadan Muja. Although sentenced to two years of probation for abuse of office, Muja is still running the city. The corrupt in this country do not scuttle away in embarrassment and there is no shame in fixing people up or finding people jobs, one quickly learns.

Early this year, Transparency International released the 2015 Corruption Perception Index, which tied Kosovo with Moldova for the 103rd place in the world. An EULEX report investigating Maria Bamieh’s allegations that the mission itself was corrupt found that corruption in the country was omnipresent and the mission’s ultimate challenge.

Although EULEX’s mandate has been extended for two more years, the recent leaks show that corruption is so endemic that two more years of international presence will not ensure rule of law in Kosovo. Something truly radical needs to happen for things to change.

Trailing behind the handful of people protesting in Prishtina on Wednesday evening, change has never seemed further away. More than a hundred people showed up to throw toilet paper towards the government building and yell “Mut e keni bo” (loosely translated as ‘You made it shit!’). Nevertheless, those few who came to express their discontent dispersed in about 15 minutes. Meanwhile people in the crowded Nene Tereza boulevard –  the diaspora visiting for the summer, the locals enjoying their coffee at the korzo – looked on, slightly amused.

Insajderi claims it has around 1,000 recordings, and so far it has been sparsely publishing them one by one. So far seven “dossiers” have been made public but regardless of the implications, the protests (three so far) have not gained momentum. Instead, the serialization has become tantalizing, turning the Pronto 2 affair into a soap opera with the next star cameo yet to be revealed. A major Wikileaks-style dump would have helped to visualize how far the influence of party officials in power extends in institutions, public enterprises, agencies, and universities. A publication of a large chunk of recordings all at once would also make it impossible for the State Prosecutor Aleksander Lumezi to dismiss the wiretaps so quickly.

The protests would also gain momentum if the opposition parties that are currently protesting the demarcation border deal with Montenegro in parliament (some with tear gas, others with words) would have joined the call for an investigation into the wiretaps (though some Vetevendosje MPs and activists did attend the protests). Perhaps even the Prime Minister’s party, the Democratic League of Kosovo, LDK, could join the fight. Ah, but I’m getting ahead of myself and forgetting that Mustafa’s own sons got a contract to fix government cars from the Prime Minister’s office, and that Fatmir Limaj, leader of the NISMA opposition party, is on trial for abuse of office while he was the Minister of Transport and Telecommunication.

The leaks that have been published so far prove what many have known for long – the system is crooked and our leaders are bent. However, they have also shown that many Kosovo citizens will suffer just about any injustice in silence – at least until all hell breaks loose. In Sbunker, Besnik Pula argued that people are not scandalized by the Pronto 2 affair because they were aware of nepotism and cronyism long before these phone calls leaked (a public secret), but for public dissent to manifest itself, people need to believe change is possible. Such hope, he argued, can only be provided by a different approach – a different dialogue from the one we’ve had so far.

Corruption as a civic and moral crisis

I agree with his argument, but I am also afraid that not only hope, but also violence makes things possible and imaginable. It is problematic that citizen-organized protests with the banner #Protestoj (I protest), evoking Macedonia’s Colorful (yet failed) Revolution, are getting little attention and little support. What passive bystanders and peddlers on Nene Tereza boulevard fail to see is that the stakes are high even if people are protesting peacefully.

It seems like the student protesters who pressured the former rector Ibrahim Gashi (who was promoted through publishing in a fraudulent journal) into resignation knew very well that without some scuffling with the police, they would not make the news. Pepper spray was shot and stones were hurled but in the end, Gashi was removed from his office.

Last year, Vetevendosje supporters and mothers of missing persons protested against offensive comments made by Aleksandar Jablanovic, part of Mustafa’s cabinet at the time. Dozens of protesters and police officers got hurt (and 160 people were arrested) before the PM finally sacked the Serb minister who called family members of missing persons “savages” for protesting the Orthodox Easter celebrations in Gjakova.

Recently, the Assembly building was attacked by unknown assailants, possibly with an RPG, and a grenade was found at the home of the head of the commission on the border demarcation between Kosovo and Montenegro. These are uncharted territories even for a society with a history of protesting for its civil rights and independence, justice and rule of law.

The recent violence we’re witnessing may either be caused by disillusionment, or may have been a set-up. However, it is precisely this sort of violence that might make possible what faint hope cannot: change. But at what cost?