The united colors of the Macedonian revolution

Citizens of all ages and ethnicities fill the streets amongst the spectacle of ‘baroque-style’ buildings that have surrendered to the rainbow-colored paintballs of the Colorful Revolution.

“I will not pay taxes for this,” says a poster beside the fountain above which sits the statue of Alexander the Great. The testicles of the fountain’s guardian lions have been painted red.

The majority of the city’s new statues and monuments are smeared with red dye as a result of the paint-filled balloons thrown at them. A hefty part of the government buildings share the same fate.

The Skopje 2014 project that covered the whole city with baroque-style façades, stuffing the boulevards and bridges with statues of historically significant Macedonian forefathers (women, with the exception of the mother of Alexander the Great are also visibly missing) erected in faux marble for posterity, has begun changing shades.

This is being done by the diverse activists of the ‘Colorful Revolution,’ as the the civil struggle expressed in all hues imaginable has been titled. 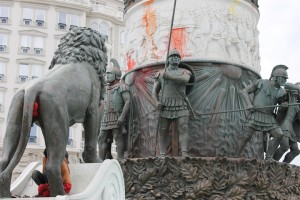 A lion guards the statue of Alexander the Great in the center of Skopje. Photo: Rron Gjinovci.

On May 10, around 2,000 Macedonians of all ethnicities, ages and social classes marched from the building of the Special Prosecution of Macedonia to the Ministry of Finance.

In 2015, the leading opposition party the Macedonian Social Democratic League (LSDM), revealed that approximately 20,000 Macedonian phone numbers were being wire-tapped. The scandal stirred massive protests, and sent the country into a political crisis, which ended with a European Union-brokered deal including an interim government and new elections, which have yet to be held, and appointing a special prosecutor to investigate the allegations raised in the wiretaps.

The protest on Tuesday was only one of the tens of protests held from April 12, 2016 when Gjorge Ivanov, the president of Macedonia, used his constitutional right to pardon every politician that was under investigation. 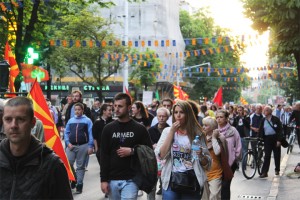 Ivanov justified his decision by saying ”it was in the country’s best interest,” since according to him “while the judges are making decisions, international officials are strolling around courts to determine who will and will not be kept in jail.”

The recently-appointed head of the Special Prosecution, Katica Janeva, together with her deputies Lence Ristoska and ethnic Albanian Fatime Fetai are now considered the three musketeers of Macedonia.

“They have become like pop stars, people clap their hands every time they start talking,” says Klementina Ristovska, an activist of the Solidarnost movement, a leftist organization bringing together Albanians and Macedonians. 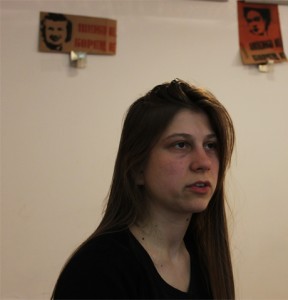 Ristovska says that the Special Prosecution’s work “is irritating Gruevski and his partners.”

Similarly to the Colorful protests Ristovska attends, Solidarnost is a diverse leftist movement. It is part of the #Protestiram (I protest) platform, which incorporates nonprofit organizations, leftist organizations and the largest opposition party in Macedonia LSDM  led by Zoran Zaev,  who leaked the wiretaps of phone calls between political officials in Macedonia.

Several similar protests were held in Macedonia last year, but did not achieve their target. Due to this Ristovska is hesitant to disclose the ultimate goal and target of the protests.

“It is important to attain a basic level of democracy, that is to say, to not have an authoritarian government,” explains Ristovska, while looking at at the slogans written in Macedonian and Albanian fixed upon the walls of the room where Solidarnost carries out its activities.

“Seen from a realist’s point of view, it is pivotal to achieve justice so the three prosecutors can jail current government politicians, and organize democratic elections.”

At 6 pm close to Skopje’s Special Prosecution office, in what has become a familiar ritual, various citizens have gathered. So far, the protesters have rested only on Sundays and for Easter break; every other day they continue marching through the city.

From the office of the Special Prosecution, in solidarity with “the Three Musketeers of Macedonia” towards the next institutional building which is going to be covered in a variety of colors as a sign of the Colorful Revolution, the Macedonian citizens chant “Nema pravda, nema mir!” (No justice, no peace) and march festively. Surprisingly, apart from other ex-Yugoslav partisan songs, they are also accompanied by the famous partisan song in Albanian called “The partisan is going to war.” 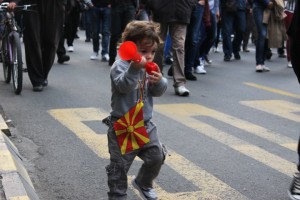 “I want the president to revoke his decision to grant amnesty to the politicians and to postpone the elections until we are in the condition to organize them,” explains Ivana, a Macedonian citizen in her twenties that regularly takes part in the protests.

On May 9, about 20,000 ethnic Albanians took the streets in Skopje to protest the ruling coalition. The protesters, holding Albanian flags, gathered to commemorate the one year anniversary of the Kumanovo incident, during which ten Albanian gunmen and eight police were killed.

Ivana does not consider the exclusively Albanian protest problematic, rather, she thinks of it as a diversification of dissatisfaction, although she firmly concludes, “We need to continue together.” 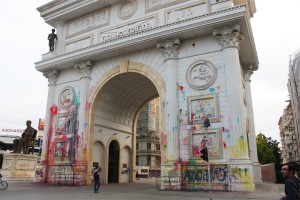 The arc de triomphe in the center of of Skopje. Photo: Rron Gjinovci.

“Nema pravda, nema mir!” stormed Skopje’s streets while the marchers passed by historical figures linked to Macedonia. The Yugoslav communist leader Josip Broz Tito is one of them; it seems as though he is discontentedly observing what’s happened to this former Yugoslav republic.

The “Macedonia” arc de triomphe is splattered with paint. It looks like a trophy for the protesters that march beside it. Meanwhile, the founding fathers of modern Macedonia, some mounted on horses and some sitting in armchairs, observe the situation earnestly.

As soon as the crowd arrives at the building of the Ministry of Finance – the final destination of the protesters on this evening- the organizers hand out paint-filled balloons to those who are willing to brand the institution with the ‘emblem’ of the Colorful Revolution. 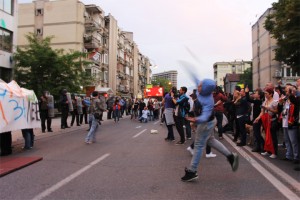 Suddenly, three people (who, judging from their clothing seemed to be two boys and a girl) show up. They are wearing Guy Fawkes masks and wielding plastic rifles, with which they hurl paint.

As soon as the “shooters” are done, they return to the protest crowd and are received with enthusiasm. Some look at them with admiration, others are curious to learn their true identities.

One of them is a 30-something year old Albanian man from Skopje who used to work as a journalist. “I’m currently working as an activist citizen,” he says jokingly. 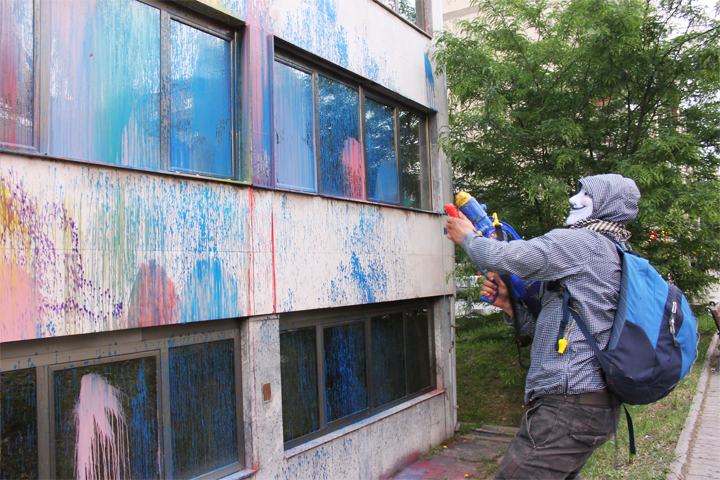 “I have never seen my country in a worse state than now,” the masked hero of the Colorful Revolution recounts. He considers the Macedonian government “definitely an authoritarian regime, which also has fascist elements.”

“These events are no longer protests, this is the Colorful Revolution!” the painter-protester declares while various citizens stop to hug him.

“People are expressing their anger by throwing colors because our babies die because of lack of ambulance care while the baroque lions which only depict primitivism cost us millions,” he declares, removing the mask, showing his nervous but smiling face as people close in on him to greet and encourage him. For him, the all-encompassing nature of the protests, which include people with various ideological, ethnic, class, etc. backgrounds, is the most important. 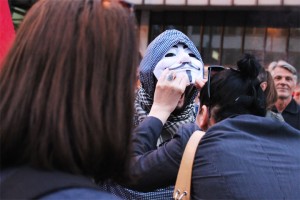 “Various public personalities are joining the Colorful Revolution with the purpose of stopping this authoritarian regime,” the young man adds before he stops to talk to elderly ladies who offer him ideas for future actions.

Zdravko Saveski, one of the initiators of the protests rolling down the streets of Skopje, can only follow the protests held in the past fortnight through social media.

For the past 15 days, he has been put under house arrest. Along with other activists, Saveski is being accused for “participating in a crowd that damaged public property according to Macedonian laws,” with regard to an attack against the office of the Macedonian President.

Born in 1976, Saveski is a doctor of science and currently leads the newly established party Levica (the Left). He also co-authored a book about cooperation between Albanians and Macedonians in his country in the last century. 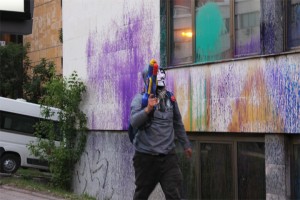 “Everyone is oppressed in Macedonia,” he says from his home. “The government is not only made up of Macedonian nationalists, but also by the Democratic Union for Integration (BDI) which is an Albanian party. In other words, Albanians are not the only oppressed people in Macedonia,” explains Saveski during a Skype conversation. “That is why we need the protests of the Colorful Revolution to be diverse.”

He likes the name of the movement because, “it is adorning Skopje, fixing it from Skopje 2014 project, and that it is colorful because the people are joining in have diverse backgrounds.”

“People are certain that this regime is authoritarian, even more so than it used to be. We see it as our last chance to return Macedonia to democracy,” says Saveski. “It is our great and last chance.”

Visa Liberalisation for Kosovo: It is Not Over Yet

by Besa Shahini
Next: News

Justice institutions have failed in the war against corruption