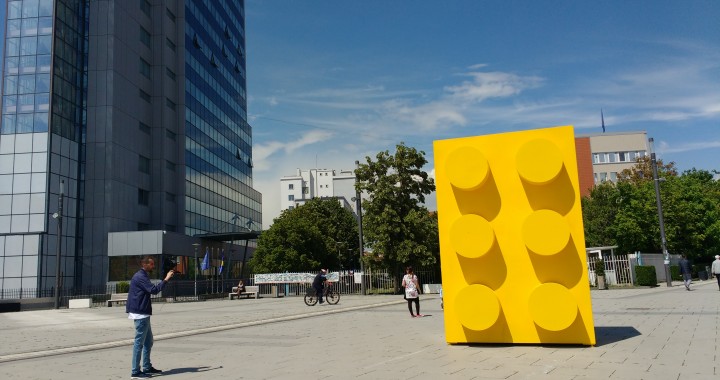 A man taking a picture of a temporary art installation LetGo in the center of Prishtina.

Visa Liberalisation for Kosovo: It is Not Over Yet

How Kosovo is discriminated against when it comes to visa liberalization.

About 70,000 Kosovo citizens apply for travel visas to the Schengen countries every year. This costs them a total of five million euro per year and many thousands of hours of mindless waiting in front of embassies.

On 4 May 2016 the European Commission proposed visa liberalisation for Kosovo citizens. If all goes well, by 2017, Kosovo biometric passport holders will be able to travel visa-free to Schengen countries. In addition to saving five million euro annually, Kosovo citizens will finally not feel like second-class citizens in Europe.

Yes, if all goes well. Because what must happen next is that the proposal by the Commission must be voted in the European Parliament and Council. The Parliament is not a problem – they have been advocating that Kosovo gets visa-free travel for years. The Council is trickier. They have to pass this proposal by a Qualified Majority Vote (QMV) – meaning 16 states representing 65 percent of the EU population.

This means that if, say, Germany, France and Spain decide to vote “no,” this proposal will not pass (voting calculator). I mention these countries because Spain is a so-called “hard” non-recognizer of Kosovo’s statehood that has continuously made Kosovo’s relationship to the EU more difficult, by challenging every move that the Commission made toward Kosovo. Germany and France have recognized Kosovo, however they hosted the biggest number of asylum seekers from Kosovo in 2015 (42,000 out of a total of 72,000), which was a drain on their resources.

The issue of illegal migration and asylum seekers is actually key to Kosovo’s much prolonged road to visa liberalisation proposal. In 2009, when Serbia was given visa-free travel, Kosovo was put on the “black” Schengen List because it was seen as a “security and migration risk.” In 2012, when Kosovo received the visa roadmap – list of conditions to be met before visa-free travel can happen – an extra requirement for Kosovo stipulated that the numbers of asylum seekers and illegal migrants from Kosovo must be drastically reduced before Kosovo can receive visa-free travel.

That year alone, 10,000 asylum seekers from Kosovo were registered in the EU, a number that doubled every year, until it reached the peak of 72,000 in 2015. In 2016, the numbers have reduced drastically. Nevertheless, the fear that visa-free travel would encourage another wave of migration from Kosovo lingers in EU countries.

This is of course unfair. Kosovo cannot do much to control asylum seekers. Schengen countries can. Asylum is given only in cases of proven persecution (political, religious, sexual orientation) or major health reasons that cannot be addressed in the home country. There is no economic asylum, which is what most asylum-seekers from the Balkans need. Countries like Germany have long processing times for asylum applicants, which enables people to stay there for months while they wait for their asylum request to be denied. Switzerland on the other hand has really short processing times, thus discouraging people from the Balkans to seek asylum there.

In 2015, the European Stability Initiative (ESI) wrote about the need for fairness for Kosovo. ESI proposed that Germany should reduce the processing timeframe for asylum seekers – like Switzerland – so it could address the asylum seeker problem. At the same time, the Commission should assess Kosovo’s fulfillment of technical criteria fairly and give Kosovo citizens visa-free travel.

However, even the technical criteria for Kosovo were unfair. Most of these technical criteria – securing borders, passing migration laws, securing civil registries and building biometric passports – Kosovo started fulfilling since 2008. In 2009 Kosovo unilaterally adopted a “roadmap” for visa liberalisation, fashioned on those from the region, and started implementing it. When the EU finally gave Kosovo its official visa roadmap in 2012, it contained much more criteria than had been imposed for the neighbouring countries. Also, when the EU published their yearly assessments of the implementation, it used very vague language, which made it hard to discern if Kosovo had met the criteria or not.

It was not until December 2015 that the Commission published its first clear report on Kosovo, when it said that there were eight remaining conditions for visa liberalisation. Last week it also announced that most of the eight have been met and Kosovo should get visa liberalisation.

So why the change of heart? One explanation is that the move to give Turkey – and its population of close to 80 million – visa-free travel in return for blocking refugees from coming into the EU, has really put the EU to shame about not giving 1.8 million citizens of Kosovo visa-free access. However, if it is true that Kosovo’s fate is tied to that of Turkey, Kosovo may be in trouble.

As of last week, Turkey has decided to play tough with the EU and not meet the remaining conditions for visa-free travel. The EU has in return started to work on “Plan B” to turn Greece into a big refugee camp, in return for a financial bailout. So if Turkey’s visa deal fails, the EU might feel under less pressure to vote along on Kosovo quickly.

How can they justify it? Well, in the proposal, the Commission left an opening by saying that Kosovo must “strengthen its track record in the fight against organised crime and corruption” by the time of the vote in the Parliament. This is vague enough for the EU to be able to say – if it needs to – that Kosovo has simply not “strengthened” its track record enough.

In any case, Kosovo has come closer to visa liberalisation. This proposal was a necessary step. Whether the Council will vote on it or not, will remain to be seen. Nothing is really over until it is over.