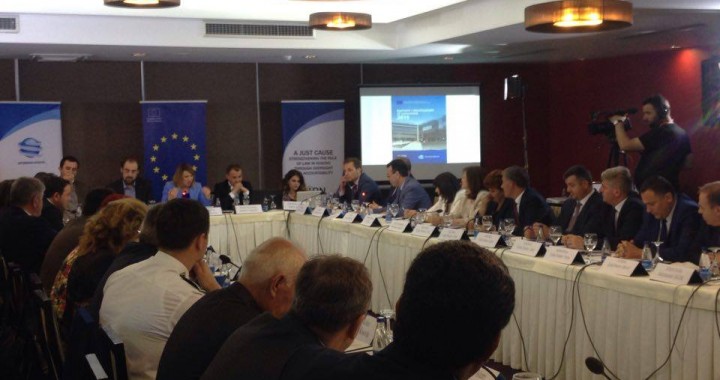 Justice institutions have failed in the war against corruption

The annual court monitoring report published by BIRN and Internews Kosova finds that prosecutors and judges have failed to fight corruption in Kosovo.

The current situation of the justice system in Kosovo will continue to be problematic as long as the country’s justice institutions continue to tolerate violations of court proceedings by judges and prosecutors, and as long as the investigative and judicial bodies fail in the war against the corruption, finds the annual court monitoring report published by the Balkan Investigative Reporting Network (BIRN) and Internews Kosova today.

At a roundtable held on Friday, report authors and judicial personnel discussed findings of the ninth annual court monitoring report, which  includes the results of monitoring more than 500 proceedings before 26 courts throughout 2015 in the Basic, Appeal and Supreme courts.

The report is focused primarily on the treatment of corruption charges, analyzing the problems and obstacles faced in the war against corruption.

BIRN and Internews Kosova found that prosecutors failed to raise indictments within the statute of limitations, thus endangering the processing of major corruption cases.

“In terms of corruption we have discovered many injustices,” explained report author Petrit Kryeziu. “For instance, the judges panel was incomplete, and in some cases prosecutors were unprepared or even absent.”

The report recommends that prosecutors should prepare better and represent the indictments more efficiently, especially in cases of corruption. The report also recommends that the Judicial and Prosecutioral Councils create a unified sentencing policy.

“We need to work to gain public trust,” admitted Nehat Idrizi, the head of the Judicial Council of Kosovo, adding that it is true that there is a lack of judges in Kosovo courts.

“The Council is aware that there is plenty of work to be done.”