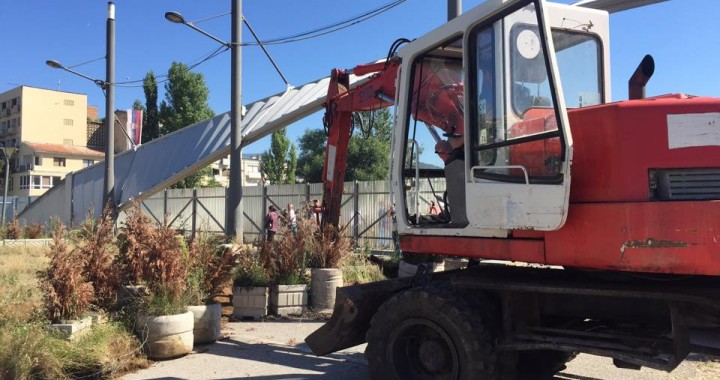 On Sunday, an EU funded project began construction on the Mitrovica Bridge to open its lanes for all traffic and to pedestrianise Kralja Petra Street.

Construction on the Mitrovica Steel Bridge meant to revamp the area and remove barricades for vehicles began on Sunday.

“After sixteen years since the end of war in Kosovo, the Mitrovica bridge will be a free and uniting bridge… it will serve to free movement of people and vehicles as it is defined in the Brussels agreement dated 25 August 2015 signed by the Prime Ministers of Kosovo, Serbia and the EU High representative,” said Edita Tahiri, Kosovo’s chief negotiator with Serbia.

Although two other bridges already connect all traffic traveling to and from north and south Mitrovica, the Mitrovica Steel Bridge dividing the Ibar river has been a symbol of separation since the Kosovo War.

In 2011, Serbs protested the extension of Kosovo Customs to northern border points and erected a barricade on the northern side of the Steel Bridge. The barricade was removed overnight in June 2014. In response, north Mitrovica Mayor Goran Rakic erected the so-called “Peace Park,” a line of trees and concrete blocks meant to prevent all traffic except for pedestrians from crossing the bridge.

The decision to finally begin construction has come after a 20 hour session of EU facilitated negotiations between Kosovo’s Minister of Dialogue Edita Tahiri and Serbia’s Chief Negotiator Marko Djuric earlier this month on August 2-3.

The agreement to remove the Peace Park was already reached last year in Brussels. On August 25, 2015, the parties agreed that the EU would sponsor a project to open the bridge for all traffic by the end of June 2016. Additionally, the parties agreed to pedestrianise north Mitrovica’s Kralja Petra (King Peter) Street by the same deadline.

“Regarding delays, Serbia blocked [the start of the process] for almost one year,” Tahiri stated.

Djuric’s office stated that pedestrianising Kralja Petra street is crucial to ensuring the safety of Serbs in Kosovo. The pedestrian zone will cause northbound traffic to enter through roundabouts on either side of the bridge.

“Also, we received written guarantees that a KFOR checkpoint will be set up on the bridge on the north side of Kosovska Mitrovica. This would create security pre-conditions to prevent any possible attempts of provocation and attack on the Serbian population in northern Kosmet,” Djuric’s statement added.

The EU Office in Kosovo, which is funding over 1.2 million euros for the project, has called the agreement a symbol of mutual understanding.

“The Mitrovica Bridge will become the symbol of normalisation of relations between the Kosovo Serb, Kosovo Albanian and other communities,” an EU press release stated.

Serbia’s Office for Kosovo and Metohija insisted that now that the Mitrovica Bridge agreement is being implemented, the Kosovo government should establish the Association of Serb-majority Municipalities.

“Pristina longer has any excuse to continue with obstructing the dialogue by not establishing the Community,” Djuric concluded.