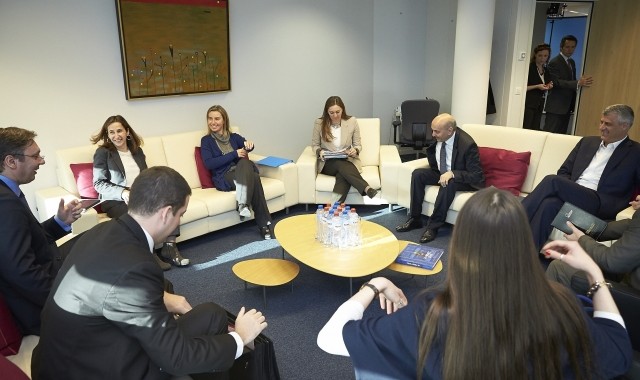 Representatives of the Serb and international community, as well as government officials will begin drafting the statute of the Association of Serb-majority municipalities in Kosovo.

The working group that will draft the statute of the Association, a result of an agreement signed on August 25, 2015 as part of the ongoing Brussels-mediated dialogue between Serbia and Kosovo, was established by the Kosovo government on Wednesday.

The group is composed of two Serb representatives from northern Kosovo and two Serbs representing other predominantly Serbian municipalities south of the Iber River. It also includes representatives of the Organization for Security and Co-Operation in Europe, the OSCE, and officials from the Ministry of Local Government Administration.

“With the agreement in 2013 it was determined that four Serbs, two from the northern municipalities and two others, in cooperation with the OSCE and the Ministry of Administration of Local Governance will compile the first draft of the statute of the Association. We have the names of the managing team,” said Deputy Minister of Local Government Administration Bajram Gecaj.

Gecaj did not reveal any specific names of the group members.

Faton Abdullahu, an advisor to the Kosovo Prime Minister, said that the group’s establishment, almost a year after the 2015 agreement was signed, was not a result of pressure from Serbia.

“There is no pressure from anyone, of any nature in this direction. They’re working in a tempo that we as a government, considering all the relevant factors, consider to be optimal and with national interest for our country,” said Abdullahu.

Days ago, however, Nenad Rasic, a Serbian MP in the Kosovo Assembly, complained that the coalition partners in government which include the Democratic Party of Kosovo, PDK, the Democratic League, LDK, and the Serbian List have not discussed the Association.

Opposition parties have organized numerous protests and actions inside and outside the Assembly opposing the agreement for the establishment of the Association of Serbian-majority Municipalities.

During an official visit in May, the High Representative of the European Union for Foreign Affairs Federica Mogherini told the Kosovo Assembly that the Association’s establishment “was expected” and that it was not in violation with Kosovo laws.