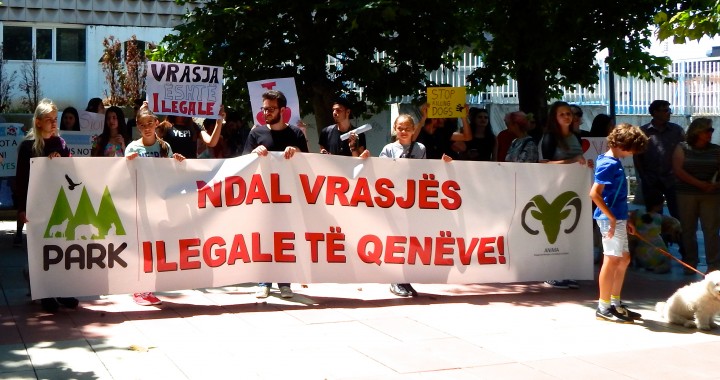 Protesters demand an end to killings of stray dogs in Kosovo

Animal rights activists gathered on Wednesday afternoon in Skenderbeu square to protest the inhumane killing of stray dogs in Kosovo.

More than a hundred people gathered in the main square in Prishtina after 460 dogs in Klina were shot last week by an association of hunters contracted by the municipality to kill 750 dogs for 15, 000 euros.

The protest, which was organized by People for Animal Rights Kosovo, PARK, a local activist group, drew a crowd of about 130 people, many of whom brought their dogs to the action.

“We hope that they will see through with the law and take legal actions against these events,” said Matoshi.

Several other animal rights organizations came out to bring attention to the matter at hand.

Bardh Salihu, an independent activist, said that the killings in Klina have sparked concern about the possibility of similar actions being taken in Prishtina.

“Until about five or six years ago, killing stray dogs by shooting them was a pretty normal thing, but it’s 2016 and we shouldn’t be condoning this type of activity,” said Salihu. “It doesn’t matter where it’s happening, it should just stop all together.”

Article 8 of the Law  on Animal Welfare  states that except in cases of emergency which visibly indicate extreme pain which may be conducive to death, only a veterinarian or another competent person shall be permitted to kill dogs.

“The law is ambiguous and leaves room for these kinds of things to happen,” said Salihu. “If a dog is deemed to be aggressive then I guess that the law says that you have the right to kill it. You can euthanize it, but not shoot it. So these actions are illegal on so many levels. It’s just wrong.”

“The biggest problem is that when they shoot the dogs, the animals don’t always die. They get injured and then they live like that for weeks in pain. It’s really inhumane,” said Sullivan. “There are other ways to sort out the problem. There’s so much money being spent to shoot these dogs when you can spay a dog for 10 to 15 euros.”

Branka Gluhinic, an organizer for the Centar Projekt, said that education should be the solution to tackling stray dog issues in Kosovo.

“The last two years we’ve organized education programs for kids in school that teach them how to recognize an aggressive dog, and how to behave so that they are protected. We need support from the government to expand this program and have this training added to the curriculum in schools,” Gluhinic said.

While the activists are demanding a more humane approach be taken when dealing with stray dogs in Kosovo, they are not denying the problem at hand.