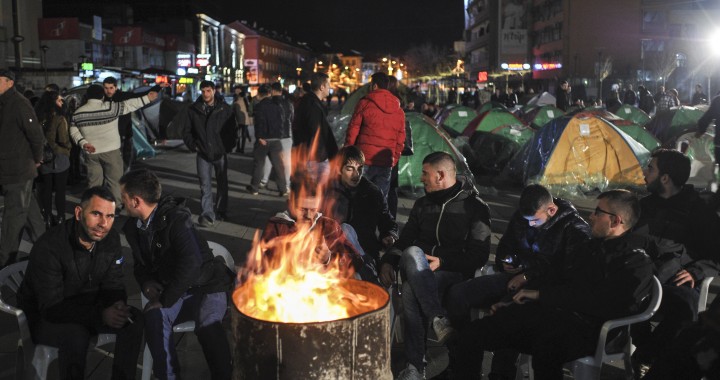 Protesters camping outside of the government building. Photo: Atdhe Mulla.

Opposition: Protest will continue inside and outside of parliament

Kosovo opposition camps out in Prishtina’s main square, vowing to stay there until Government resigns.

On the eve of the continuation of Friday’s Assembly session, supporters of the opposition set up tents in Prishtina’s Skanderbeg square, a stone’s throw from the government administration building and the parliament.

Protesters and opposition leaders said they would remain there despite a rain forecast to protest the anticipated election of former prime minister Hashim Thaci for president, as well as two deals signed last summer, one giving Serbs greater autonomy within Kosovo and another on border demarcation with Montenegro.

Vetevendosje founder Albin Kurti, an MP, said that the reason for the protest is that, “It is clear that the government’s plan is to go from an authoritarian towards a totalitarian regime.”

Kurti, along with Vetevendosje president Visar Ymeri and other MPs from the opposition coalition, Ilir Deda, Shqipe Pantina, Fatmir Limaj, Driton Çaushi, visited the citizens who had bedded down in some of the 30-40 tents that had been erected.

The camp was well organized, with citizens responding to calls to donate food, sleeping materials, and other necessary products.

On Wednesday before the Assembly session was set to begin at 14:00, hundreds of protesters remained despite intermittent rain throughout the night.

Ramush Haradinaj, leader of the Alliance for Kosovo’s Future, AAK, who resigned his seat in the Assembly on Friday out of protest, vowed to continue his protests outside of the parliament.

“This starts an epoch of continuous and permanent opposition,” he said of the tents all around him.

During the  night, the personal car of the Minister of Agriculture, Krasniqi was set on fire. Police have not apprehended anyone for burning down the car. On Wednesday morning, the government released a statement blaming “people who have lost all reason, and in their effort to push the country into chaos and anarchy, for specific benefits, choose any radical means and tools.”

The opposition party Levizja Vetevendosje! denies any ties to the incident. Adonis Tahiri, the party’s spokesperson stated, “This has nothing to do with us because all our activities are public.”