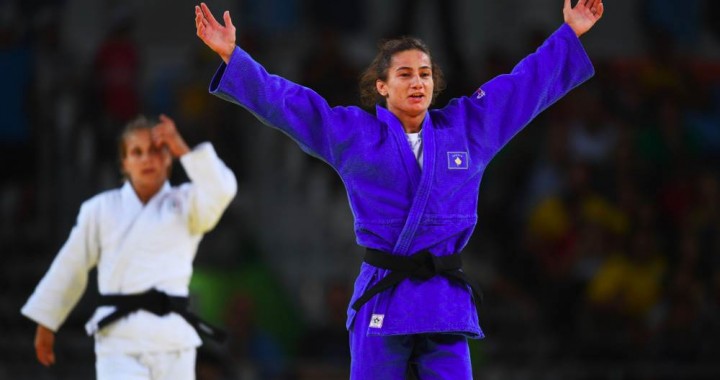 Kelmendi made history in Rio by claiming the gold medal in Women’s judo and becoming the first Kosovo athlete to ever win a medal in the Olympics.

Majlinda Kelmendi, the current world champion in women’s judo, won the gold medal in her debut as a Kosovo athlete in the Olympics on Sunday.

The 25-year-old, who participated in the London Olympics four years ago under the Albanian flag, made history when she defeated Italy’s Odette Giuffrida in the final of the women’s 52 kg category. This year marks the first time that Kosovo is participating in the Olympic games since the country’s independence in 2008 and its membership to the International Olympic Committee in 2014.

Kelmendi, a twice world champion and a three-time European champion,  was a favorite for the gold upon entering the race.

Head of the International Olympic Committee Thomas Bach presented the Kosovar athlete with the Gold medal as she teared up.

Kelmendi seemed jubilant as she explained to the media how much the gold medal, Kosovo’s first ever, means to her country.

“That means a lot. People, especially kids, in Kosovo look to me as a hero. I just proved to them that even after the war, even after we survived a war, if they want something they can have it. If they want to be Olympic champions, they can be. Even if we come from a small country, a poor country,” said Kelmendi.

Eight athletes from Kosovo are participating in the Rio de Janeiro Olympic games. Rita Zeqiri ranked 34th in the women’s 100 m backstroke category in swimming on Sunday, while Qendrim Guri came out 140th in the men’s road race in cycling. Urata Rama came out 48th in women’s 10 m rifle.