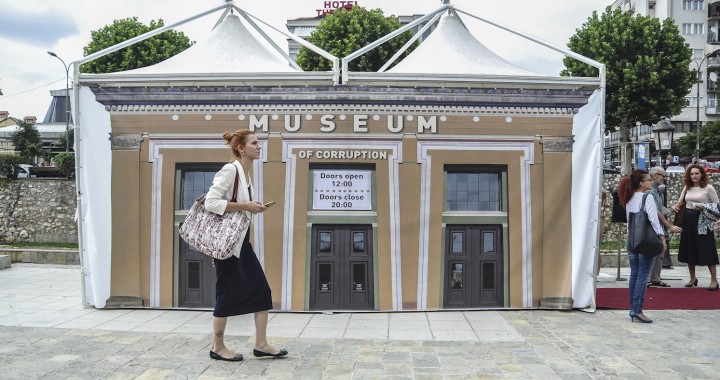 If corruption was a thing of the past

Just next to the pier of Prizren’s Lumbardhi river, the Museum of Corruption has opened its ‘doors’ to the public. There, citizens of a hypothetical society without corruption, can understand the bygone era in which this phenomenon still was amongst people.

The Museum of Corruption entertains these ideas and offers a new perspective to address the age-old phenomenon in a different light. The museum is supposed to provide a tour to bring people back to a time when business was conducted with bribery. The improvised tent space along the river is turned into a stage for a performance of how corruption used to operate.

“The main idea is to display corruption as something from the past, to make the visitor feel as though they are entering from a world where corruption is extinct,” explains Rozafa Maliqi, the coordinator of the project.

According to Maliqi, artefacts that symbolize specific issues related to corruption, such as healthcare, education, governance, and illegal construction will be exhibited at the musion.

“There will be two actors playing two roles. The first will be a showman who stays outside and calls attention to people to enter for five para paper bills. The second actor, a bureaucratic figure, remains inside and sells diplomas that can be bought with the five para the visitors were corrupted with to enter the museum,” says Maliqi.

“I will be outside the museum to corrupt people with five para. I will invite them in to take a look at a diploma that they will need,” says Lum Veseli, a young actor who appeared in the Oscar-nominated film Shok.

“I, as a bureaucrat will be inside and sell diplomas for five para”, says Onat Kovac, another actor who will be acting at the museum until the end of the international documentary festival Dokufest next Saturday.

Actors Sonja Azizaj and Erzen Llapashtica will also perform during this time.

This project is supported by the United Nations Development Plan (UNDP).

Visitors can also report corruption through KALLXO.com’s newest reporting mobile app, which is displayed inside the Museum of Corruption will be soon available online for download.