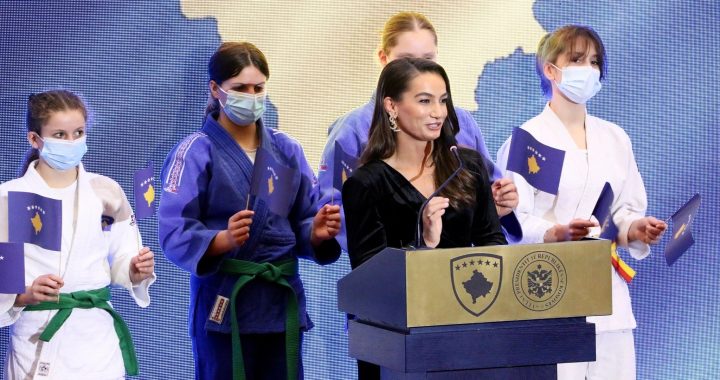 The Olympic judo champion who brought glory to her country has retired from active judo to continue her career as a coach.

The judoka who brought Kosovo two world championship titles, four European titles and an Olympic gold medal, Majlinda Kelmendi, retired from active judo on the evening of December 6, with a state ceremony. Struggling to hold back tears, Kelmendi thanked her homeland for all her successes.

“I worked hard not to disappoint Kosovo and make the country proud,” Kelmendi said during her speech.

During the ceremony, President Vjosa Osmani honoured Kelmendi with the Shotë Galica, an order given to persons who have advocated, committed acts of bravery or courage and who have fought for gender equality.

Osmani said the world had learned more about Kosovo thanks to Kelmendi’s sporting feats.

“She is rightly considered a legend of the sport of judo, the heroine of Kosovo. In the three decades of her life, she became the face of today’s Kosovo,” Osmani said during the ceremony, also thanking her coach, Driton Kuka, and the president of the Kosovo Judo Federation, Agron Kuka.

Kelmendi’s coach, Kuka, described her as a symbol of freedom gained through many sacrifices. “Majlinda became a character who gave hope to people to continue living in Kosovo,” Kuka said.

‘It was me and him against the world’

Kelmendi in turn thanked Kuka, describing him as one of the figures who has contributed the most to her success.

“I started judo at the age of eight and from the beginning until today Toni has been my coach, I grew up with Toni as a competitor and he grew up with me as a coach and for many years we were just me and him against the whole world – and we have shown the world how much we have values in Kosovo,” Kelmendi said.

After the end of the 2020 Olympics in Tokyo, the judoka from Peja announced her withdrawal from active sport. She had faced physical problems that also prevented her from winning medals in Tokyo, she said.

In an interview for the official website of the European Judo Federation, EJF, she said that she had considered retirement in before Tokyo 2020.

“I had four surgeries in five years; every year I had a serious injury. I was tired. Toni [her coach] told me I could do it and win 10 per cent more golds, so I said OK [and] … the training was good and strong, but it did not go as we’d planned and hoped,” Kelmendi told EJF. She was eliminated in the first round by the Hungarian judoka Reka Pupp.

In October this year, the Kosovo government decided to recognize her as a “Citizen with Special Merit” for her contribution to the promotion of the judo in the local and international arena.

Kelmendi brought back to Kosovo its first Olympic medal, a gold, from the Rio Games in 2016. She became two-time world champion and four-time European champion. Throughout her career, Kelmendi four times won the famous Paris Grand Slam race. In 2017, she was declared the best judoka in the world.