Kosovo’s government is determined to appoint a new board of directors at Radio Television Kosovo, but fresh faces alone won’t be enough to fix the troubled public broadcaster.

hen Albin Kurti’s Vetevendosje [Self-Determination] party took power in Kosovo in March for the second time, it made installing a new board of directors at Kosovo’s public broadcaster a top priority.

The former 11-member board – dismissed in June – stands accused of doing little to halt the decline of Radio Television Kosovo, RTK, from the heady days of its creation in the wake of a 1998-99 war to the current day, when critics say it has been ruined by nepotism, mismanagement and fealty to political parties.

On November 26, after a lengthy recruitment process, candidates for the new board came before parliament for approval, but a no-show by the opposition Democratic Party of Kosovo, PDK, and Alliance for the Future of Kosovo, AAK, meant the session lacked the required quorum.

It is yet to be seen whether Vetevendosje will get its way when parliament meets on the issue next week, but even if it does, media experts say the new board will not be a silver bullet for RTK’s considerable ills but only a first step on a long road to reform.

“Alone the board of directors cannot change a situation where the interests related to public service media are so political,” said Boris Bergant, a Slovenian former vice-president of the European Broadcasting Union and now senior EBU consultant. “It will be a long run to make some changes,” he said. The EBU has been involved in the development of RTK. 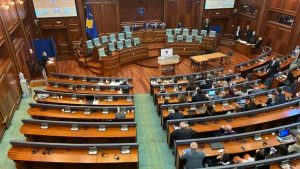 Kosovo opposition parties, Democratic Party of Kosovo, PDK, and Alliance for the Future of Kosovo, AAK, not present in the parliament during the vote for the board members of public broadcaster, Radio Television of Kosovo, RTK, November 26, 2021. Photo: BIRN

RTK was established in September 1999 by the United Nations mission that made a ward of Kosovo after an 11-week NATO air war drove out Serbian forces accused of atrocities and ethnic cleansing during a two-year counter-insurgency war.

For a decade, the broadcaster was financed via compulsory monthly payments of 3.5 euros for every household with a television, paid through their electricity bill. Kosovo declared independence from Serbia in 2008 and the following year the Constitutional Court suspended this method of financing.

RTK has been funded directly from the state budget ever since, leaving it vulnerable to political influence, particularly, say experts, from the once-ruling PDK.

Besides financing, the broadcaster also faces issues of property ownership and nepotism.

In 2012, parliament approved a new law on RTK without resolving the issue of its property, which led to an eviction ultimatum issued by the Kosovo Agency of Privatisation in 2016. The threat was never carried out and RTK remains in the premises of the now-defunct Yugoslav-era Radio-Television of Pristina, RTP.

RTK is forbidden from hiring relatives of its board members, but that did not stop Sali Bashota from hiring his son-in-law as a janitor while he was a member of the board in 2020, as BIRN reported. Family members of former Kosovo President Hashim Thaci, the former leader of the PDK who is now standing trial for war crimes in The Hague, were also employed in copyright, camera and marketing posts.

“The problems in RTK accumulated over the years as a result of a chronic mismanagement and illegal actions such as debts in the amount of millions towards foreign operators, nepotism, illegal election of the general director and poor working conditions,” Fadil Hoxha, the head of the RTK Independent Union of Employees, told BIRN.

RTK Director General Ngadhnjim Kastrati told a parliamentary committee in April that RTK had managed to bring down its debt from 5.2 million euros at the end of 2018 to 2.75 million, though Hoxha disputed these figures.

In its 2020 report on Kosovo’s progress towards eventual accession, the European Commission – the executive arm of the European Union – said that RTK “remains vulnerable to political pressure and influence”, mainly due to being “directly state-funded, with its budget determined annually by the Assembly.”

According to the report, RTK at the time had 1,024 employees, of which 806 were on regular contracts and the rest working part-time. Just over two-thirds of the broadcaster’s budget is spent on salaries, it said. The general consensus in Kosovo is that RTK has too many employees.

RTK was initially a success story, said Bergant, but developed a number of issues over the years. “The problem started to arise when the political parties grew and they wanted to have control over this public media,” he told BIRN. 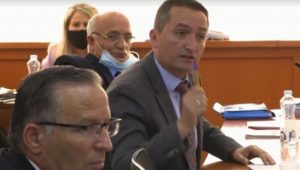 Director of the Radio Television of Kosovo, RTK, Ngadhnjim Kastrati, reporting at the Parliamentary Committee for Budget. Photo: BIRN/ Screenshot

Kosovo’s parliament – RTK’s official oversight body – dismissed the current board in June. The Committee for Media accused it, among other things, of failing to propose “any strategy to ensure adequate, sustainable and transparent financing.”

Between September and November, an ad-hoc parliamentary committee whittled down 120 applications to 18. The board should have 11 members. Two have already been elected and nine more – eight from the ethnic Albanian majority [four men, four women] and one from the ethnic Serb minority – should be appointed by parliament.

Before the failed November 26 vote, the recruitment process had been widely praised, inside and outside Kosovo.

The International Press Institute, IPI, welcomed what it called the “principled & professional selection process” in a November 18 tweet. “While a great deal remains to be done to normalise the broadcaster & safeguard its independence, this was an important step forward,” it said.

Hoxha agreed, telling BIRN that a new board “composed of professional people with integrity will be a good opportunity to start dealing with numerous irregularities and bring back normalcy to the public broadcaster.”

Vetevendosje MP Doarsa Kica Xhelili, who heads the Parliamentary Committee on Media and took part in the hiring process, told BIRN that MPs had done “their best for a transparent and meritocratic process” to ensure that no proposed candidate could be branded political.

“It is essential that in addition to the professionalism and impartiality of the board members, there is also public confidence in such an impartial process,” Kica Xhelili said.

The board, said Bergant, “should represent the public interest and not [the interests] of the parties which voted them in.” 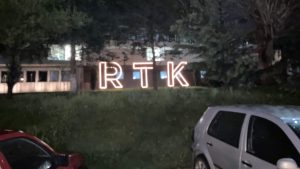 Union leader Hoxha said he hoped that once a new board is in place, a new law to resolve Kosovo’s long-term funding will be set in motion.

Kurti’s government has already proposed cutting the broadcaster’s current budget by 2.2 million euros to around 8.9 million euros, a sum Bergant said would be the lowest in Europe for a public broadcaster and would cover only salaries, not content.

Opposition MPs have objected, with former Prime Minister Avdullah Hoti of the Democratic League of Kosovo, LDK, calling the proposal an attempt “to paralyse and bankrupt” RTK.

Finance Minister Hekuran Murati, however, told MPs on November 17 that “in RTK there are around 100 salaries that are higher than the salary of a minister.”

RTK General Director Kastrati, whose term ends in early 2022, objected to the minister’s claims, pointing out that the budget for salaries at RTK had not changed during his three years at the helm.

The finance ministry and government did not respond to requests for comment.

Bergant called for a 3-5 year programming and financing strategy.

“A profound analysis of the situation has to be done and based on these professional assessments a solution has to be searched for”, he said. “It also needs a financial assessment; how many people need to be employed and what are the costs of each activity.”