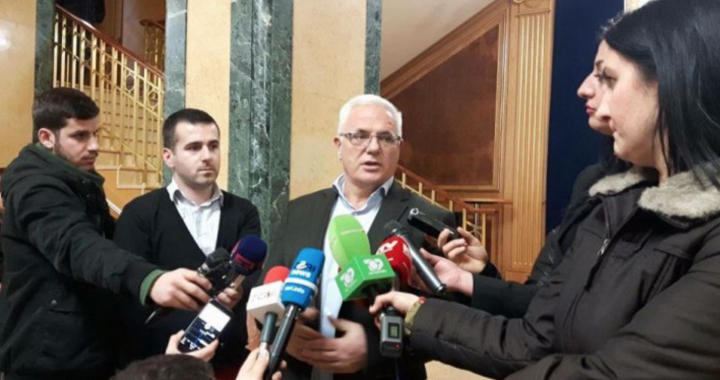 The Chief of Kosovo parliamentary group PDK stepped down as anti-cronyism protesters marched in Prishtina.

Grabovci resigned from his position as Chief of the parliamentary group Kosovo Democratic Party, PDK,  on Tuesday amid a series of anti-corruption protests in Prishtina. His resignation came just a couple of hours before the fourth protest was scheduled to take place under the hashtag #PROTESTOJ (I protest).

Grabovci is the main protagonist of the “Pronto 2” affair involving leaked wiretaps that have alluded to cronyism in Kosovo institutions and led to civic reactions in Kosovo’s capital.

In his letter addressing the public, Grabovci offered his resignation “for the purpose of a moral and political reaction, as well as for the purpose of creating the possibilities for this case to be treated legally.”

When the news of Grabovci’s resignation broke, hundreds of citizens protesting corruption in Kosovo’s institutions were gathered in downtown Prishtina. Hajrulla Ceku, who deliverd the fourth protest’s keynote speech, announced the news. However, the resignation did not fully satisfy the protesors. The crowd responded to Ceku by yelling “The resign is not enough!” and “Grabovci is not enough!”

“This is just the beginning, the movement just started, and we will not stop until they all resign,” Ceku responded.

Although Grabovci resigned from his position as Chief of the parliamentary group, he is still currently an MP with the ruling party.