Ministries’ spending on marketing through online media skyrocketed under the Haradinaj government. Many contracts were signed in violation of the Law on Public Procurement, with obscure and now defunct media often benefitting from large sums.

Research conducted by BIRN reveals that 16 of the 21 Kosovo Government ministries that made up the previous government led by outgoing Prime Minister Ramush Haradinaj spent at least half a million euros on marketing its activities through online media. Based on the contracts made available by individual ministries, this represents a huge increase in the amount spent by the preceding coalition government led by Isa Mustafa.

In 2018 alone, the Ministry of Trade and Industry spent over 45,000 euros on contracts involving 25 different websites. According to data from the same ministry, in 2017 the amount dedicated to online media was only around 900 euros, of which 673 euros went to the news agency Kosovo Press, while 230 euros were spent on advertising on Facebook to promote investments made by KIESA, a state agency within the ministry.

Minister for Trade and Industry in the Mustafa government, Hykmete Bajrami, said that there were no contracts concluded for marketing through online media during her mandate because of a lack of legal foundation for such contracts. “We had no legal basis, and that was the reason we didn’t make any contracts with anyone,” Bajrami told BIRN.

On September 14, 2017, just a few days after the inauguration of the Haradinaj government, the Ministry of Economic Development extended a contract held by the ministry with the company KANUN by three years, which is responsible for marketing the ministry’s activities through television, newspapers and online media. 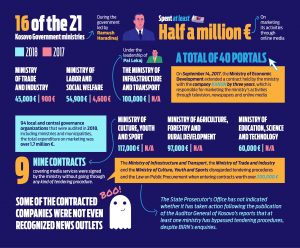 Under the agreement with KANUN, a total of 40 portals are contracted to promote the work of the ministry, either through a banner advertisement or by broadcasting live events. The amount paid to each media company varies: a portal that posts a banner is paid less than a portal that broadcasts ministry activities.

According to the public relations office at the Ministry of Labor and Social Welfare, in 2017 the ministry only paid for occasional services worth 4,600 euros in total, whereas cooperation agreements were signed with 12 portals between January and November 2018, amounting to 54,900 euros.

The Ministry of Infrastructure and Transport could not say how much of the budget was spent in this area in 2017 under the Mustafa government. However, former Ministry spokesperson Saranda Jusufi revealed that under the leadership of Pal Lekaj of the Alliance for the Future of Kosovo, AAK, more than 100,000 euros were spent on marketing via online media in 2018 alone.

The National Audit Office told BIRN that for the 94 local and central governance organizations that were audited in 2018, including ministries and municipalities, the total expenditure on marketing was over 1.7 million euros.

Enver Robelli, editor of the Foreign Affairs desk at the Swiss newspaper Tages Anzeiger, views government money being allocated to online media as a potential black hole in undemocratic states, especially those without a consolidated rule of law system and budget control institutions.

“Such payments have a toxic impact on journalism: they turn it into an instrument of government propaganda,” Robelli told BIRN. “The task of journalism should be the opposite: control of power and disclosure of budget misuse.”

According to Robelli, these payments do not serve the taxpayers at all, and he called on the new government to establish order and transparency over this matter.

However, Ardiana Pajaziti, owner of the website Kult Plus, believes that ministries publicizing their activities through the media is crucial, as citizens would otherwise be unaware of their work.

“Unless these announcements are published in the media, it is difficult for citizens to access them, as the vast majority have no knowledge of the official websites of the institutions, and even of those who have knowledge, very little follow up,” she told BIRN.

Pajaziti believes that the problem lies in the way the agreements are negotiated. “Ministry announcements should be in the media, as it is a form of cooperation between institutions and the media, but it should be done without the backroom deals,” she told BIRN, adding that opaque deals between governments and the media often come with conditions.

On top of increasing spending in this area, much of the money was allocated in violation of the law. BIRN research reveals that three ministries: the Ministry of Infrastructure and Transport, the Ministry of Trade and Industry and the Ministry of Culture, Youth and Sports disregarded tendering procedures and the Law on Public Procurement when entering contracts worth over 200,000 euros.

According to the Law on Public Procurement, contracts for the supply of goods, services, and capital investments must be concluded through public procurement procedures, while the contracts must be signed by the head of the procurement office.

In the case of the Ministry of Culture, Youth and Sports, BIRN was informed that the contracts were signed by General Secretary of the Ministry, Veton Firzi.

In 2018, the Auditor General of Kosovo’s report on the Ministry of Culture, Youth and Sports revealed that nine contracts covering media services were signed by the ministry without going through any kind of tendering procedure.

The Auditor’s report recommended that the ministry’s Chief Administrative Officer (also known as the General Secretary of the ministry) and other subordinate officers should not sign contracts that did not comply with the Law on Public Procurement. The report also warns that the absence of procurement procedures when contracting out services reduces competition and is discriminatory against other providers of such services.

Due to the Ministry of Culture, Youth and Sports limiting access to contracts signed with media in 2019, BIRN was not able to determine whether this practice continued after the General Auditor’s recommendations.

However, contracts entered by the Ministry of Trade and Industry and the Ministry of Infrastructure and Transport with media companies were often signed by the ministries’ general secretary, as recently as 2019.

In April 2019, the Ministry of Trade and Industry, led by NISMA’s Endrit Shala, reached cooperative agreements with 30 media outlets over a period of several months that included the possibility of an extension.

The ministry refused to deliver the physical copies of contracts on the grounds that these documents contain personal and business data which they are not entitled to disclose without the consent of the party, but allowed visual access on its premises.

Based on these materials, and according to official sources, Burim Rreci, the General Secretary at the Ministry of Trade and Industry, signed the contracts.

The same was true at the Ministry of Infrastructure and Transport, where the guarantor of a cooperation agreement with online media was Betim Recica, the ministry’s General Secretary, whose appointment by minister Pal Lekaj was contested by the Independent Oversight Board for the Civil Service. 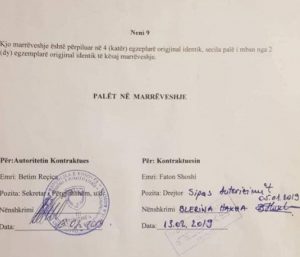 As per the legal basis, the Ministry of Trade and Industry says that contracts with economic operators are grounded in Regulation No. 02/2011 on areas of administrative responsibility of the Office of the Prime Minister and ministries.

General Secretary Betim Recica did not respond to BIRN’s questions about reaching an agreement with the media on this issue, nor did officials of the Ministry of Culture, Youth and Sports. The Office of the Prime Minister also did not comment on the two ministries’ actions related to this issue, leaving it at the discretion of the ministries themselves.

The money allocated from the state budget often went to obscure media outlets, including some which are not listed as members of the Kosovo Press Council, the body responsible for regulating the work of the media, including online media.

Some were not even recognized news outlets. A company called “Teknika NTSH”, an organization which seemingly has no website, was included on an extensive list of media companies in a table of expenses provided to BIRN by the Ministry of Culture, Youth and Sport.

Another media company contracted is Iliria Online, an outlet which has not posted a news story since October 4, two days before Kosovo’s most recent parliamentary elections. It currently exists only as a Facebook page with the website unable to be found. Another company, Gazetaprishtina.com, which was contracted for live streaming events, also has no functioning website with the domain name currently for sale.

Gazeta Lajm is not a registered member of the Kosovo Press Council, but was still contracted by both the Ministry of Trade and Industry and the Ministry of Labor and Social Welfare to host a banner promoting its activities. Both ministries were led by representatives from Fatmir Limaj’s political party NISMA.

The Ministry of Economic Development meanwhile listed money allocated to a company described as a publicity agency by fishmedia.com’s business registration agency alongside online media on its list of expenses.

Many ministries in the Haradinaj government also regularly allocated funds to highly visited online media such as Gazeta Express or IndeksOnline, as well as Insajderi.com, Gazeta Blic, Infokusi, Ora Info and Gazeta Metro.

In some cases, ministries paid for live broadcasts, as well as for following the minister’s activities or posting the ministry’s banner on the website. News agencies such as Kosovo Press and ekonomiaonline.com figure in most ministries’ contracts. The government has also allocated a small budget to advertise its work in more well known media, including on Koha.net, Telegrafi and Kallxo.com.

Cases involving contracts between media and Kosovo’s institutions have previously led to action being taken by the prosecution.

The Basic Prosecution in Prizren indicted two former officials of the Municipality of Prizren on suspicion of committing the criminal offense of abuse of official position or authority in relation to contracts signed with three television stations.

According to the indictment, two former Municipal Directors for Finance and the Economy, Zenel Ahmetaj and Ertan Simitci, entered into contracts to broadcast promotional clips with three local TV studios in Prizren without any tendering procedure. The Municipality of Prizren allocated 23,600 euros to these three TV stations, allegedly in violation of the Law on Public Procurement, the Law on Public Financial Management and Treasury regulations.

The indictment also refers to the opinion of financial expert Agim Sheqiri, who concluded that the defendants bypassed the tendering procedure and that their actions allegedly constitute elements of the offense of misuse of official position and authority, laid out in Article 422 of the Criminal Code of Kosovo.

The State Prosecutor’s Office has not indicated whether it has taken action following the publication of the Auditor General of Kosovo’s reports that at least one ministry has bypassed tendering procedures, despite BIRN’s enquiries.