This month, a performance at the Korca Beer Festival in Albania by Goran Bregovic, a musician born to a Croat father and Serb mother, incited many calls for a boycott, and sparked a wide public debate.

While it is not Bregovic’s first performance in Albania, he held a concert in Tirana in 2006, appearances by artists with Serb heritage are rare at major festivals organised by ethnic Albanians – with the public response to Bregovic’s show in Korca perhaps an indication as to why.

Exit Festival, held every year since 2000 at the Petrovaradin Fortress in Novi Sad, is Serbia’s largest music festival. Over the past 20 years, many of contemporary music’s biggest names, including Snoop Dogg, Guns ‘n’ Roses and David Guetta have all performed at the festival.

Considering its dimensions (over 200 artists played the festival in 2019 alone), the number of ethnic Albanian artists that have performed at Exit is revealing. KALLXO.com combed over the line-ups at Exit for the last 10 years, and while there have been appearances by a handful of electronic artists with Albanian heritage, no Albanian bands or singers have performed in that time.

Gjergj Emini from PLUR Agency, a promotion company that works in partnership with Exit, tells KALLXO.com that ethnic Albanian artists to have appeared at the festival include DJ Vegim, electronic duo Adriatique, and DJ Regard, who was scheduled to perform at the 2020 edition of Exit, which was cancelled.

KALLXO.com also reached out to the management of Exit to find out which Albanian artists have performed at the festival over the years. However, at the time of publication, no response was received.

Kosovo Albanian Vegim Hashimi (DJ Vegim) has performed at Exit twice, in 2010 and 2016. Speaking to KALLXO.com, Hashimi said that his first appearance 11 years ago was accompanied by a number of problems.

“The first time I played in 2010, I remember that it caused a big deal because my name was billed including ‘Pristina, KS’,” Hashimi said. “[Serbian newspapers] Kurir and Blic covered this with front page headlines like: ‘Exit festival recognizes Kosovo as a state.’ Afterwards, it was decided to remove the state designations and abbreviations for all artists.”

The DJ added that his appearance at the festival was accompanied by a heavy security presence. “I had 20 bodyguards who were ‘in action’ for the two hours while I played,” he said. “I have never had such security in my life.”

Hashimi told KALLXO.com that, due to the furore in the Serbian media, as soon as his set was over he left the festival and returned to Kosovo. However, the DJ also stated that his performance at the 2016 edition of Exit festival alongside Kosovo Serb DJ Flekitza was completely different.

“The second time, in 2016, I played with Flekitza and the reception was very different,” he says. “No one cared that we were from Kosovo. It was a great contrast to the first time.” 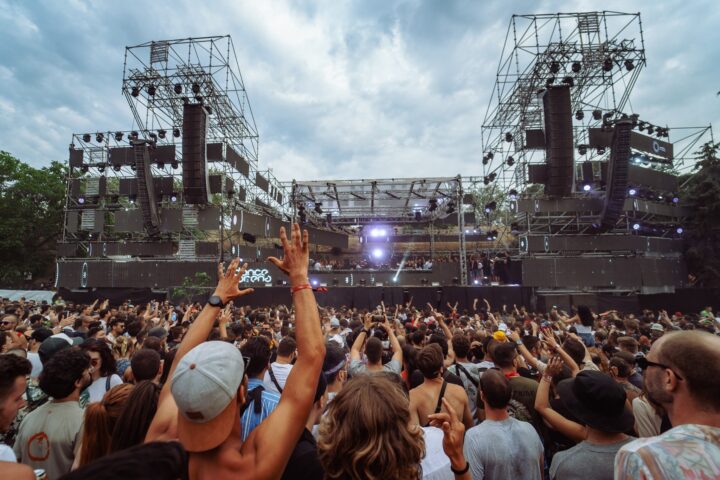 Increasing Albanian attendees if not artists

While ethnic Albanian artists at Exit may be rare, the number of Albanian attendees is growing. Gjergj Emini from PLUR Agency states that initially young Kosovo Albanians were reluctant to attend the festival, but that this has changed over time.

Emini added that his agency works well with Exit and that attendees from Kosovo are well received in Novi Sad.

Addressing the issue of cultural exchange between ethnic Albanians and Serbs, poet and writer Bujar Meholli told KALLXO.com that while culture can unite people, without a change in Serbia’s approach to Kosovo, it is difficult to expect mutual participation in cultural events, including at Exit.

“Artists like Stromae, Pet Shop Boys and Paul Kalkbrenner have played at Exit, so we are talking about an important cultural event for bringing people together through music,” Muholli said. “But if we look at the performances of Albanian artists at this festival, we cannot say that their presence is significant.”

However, cultural critic Ilir Muharremi told KALLXO.com that artists from Kosovo should perform in Serbia, and those from Serbia in Kosovo. “Art does not need to be mixed with politics,” he said.

However, Muharremi also made a distinction between what he described as “pure” artists and those associated with nationalistic ideologies and regimes of the past.

“Why shouldn’t pure artists perform in Serbia?” he asked. “Nobody denies Serbian artists from coming to Kosovo – apart from those who promote nationalism or have engaged in criminal propaganda.”

by Milica Stojanovic
Next: Opinion