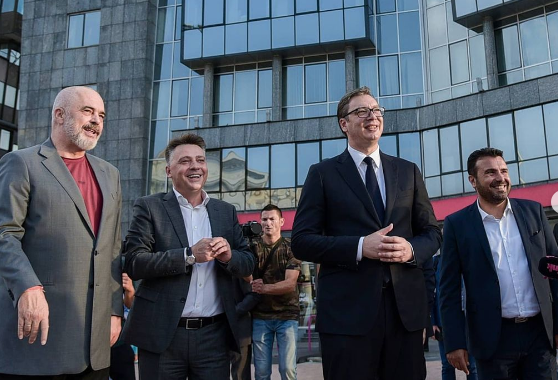 Despite its re-brand and a pledge to open borders by 2023, the ‘Open Balkan’ initiative is no more appealing to Kosovo than its ‘mini-Schengen’ predecessor.

In late July, the leaders of Serbia, Albania and North Macedonia signed three documents designed to enhance regional cooperation, agreed to abolish border controls between the three states by 2023, and renamed their regional cooperation initiative from ‘mini-Schengen’ to ‘Open Balkan.’

However, despite the rebrand, the project is anything but open.

Only three Balkan states are invested in the project, with the other three potential candidates, Kosovo, Montenegro and Bosnia and Herzegovina officially not invited to July’s meeting in Skopje. All of the absent parties have expressed objections to the initiative, casting doubts on the viability of the project’s attempts to create a free-trade and free-movement zone in southeastern Europe.

Bilateral and multilateral free trade agreements are commonplace for countries across the globe, with the European Union’s European Economic Area and European Free Trade Association perhaps the flagship example. However, the Balkan states still outside of the EU have never had a self-contained or self-governed free trade agreement.

The Central European Free Trade Agreement, CEFTA, which includes most of the Balkan non-EU countries as well as Moldova, and in which Kosovo is still represented by the United Nations Missions in Kosovo, was the only international agreement of this nature in the region. However, with the Open Balkan initiative gathering pace, CEFTA appears to be growing ever more irrelevant, at least for three of the signatories.

It has taken a long time for the Open Balkan concept to take shape. The initiative was first launched in 2019, with a declaration of intent to establish free movement of people, goods, services and capital between Albania, Serbia and North Macedonia. Despite many meetings at the Presidential level, even now progress is limited to a pledge, an agreement on cooperation in the event of natural disasters, and two memoranda.

The initiative appears to be a bid to emulate the EU and its values, whilst not being members. In fact, accession to the EU by any of the three states would mean the Union’s own trade regulations and agreements superseding any pre-existing trade agreements. Therefore, if the three countries are aiming to become a part of the EU in the near future, as per their previous claims, this agreement serves only as a temporary fix and training ground for their future obligations as members of the EU.

Meanwhile, CEFTA, the pre-existing trade agreement between the Balkan states has recently proven its value. It was highly useful during the pandemic period, with the establishment of a corridor which was used to transport goods and other essential items without any delays in early 2020.

Recently, Kosovo Prime Minister Albin Kurti has suggested that CEFTA be renamed as ‘SEFTA’ and be modeled after the EFTA-EEA, which would restore its functionality and allow Kosovo to represent itself.

Kurti has rejected joining the Open Balkan initiative. However, he isn’t the only Kosovo politician to have criticised the project. Previously, former Prime Minister Avdullah Hoti wrote a lengthy piece in which he listed the reasons why he was against what was then known as the mini-Schengen agreement.

Hoti cited fears of an invasion of goods from Russia, which Serbia has a bilateral free-trade agreement with. However, this did not stop him from signing the Washington Agreement in 2020, in which Kosovo pledged to be a part of the mini-Schengen initiative, alongside Serbia.

Montenegro and Bosnia and Herzegovina were also no-shows at the Economic Forum for Regional Cooperation in Skopje this July, and have previously shown no political will to be a part of it, claiming that it would be a “waste of energy” and “redundant.”

Another argument against Kosovo entering a free trade agreement with Serbia is that it would prevent the kind of reciprocal trade measures deployed by Kosovo in the past, in particular applying tariffs to Serbian goods. The free trade agreement envisioned by the Open Balkan initiative would not leave room for Kosovo to exert control over its own market and revenue, which is something that should not be rushed into and be set aside until the dialogue enters its next stage.

With so many legal and political issues that need to be finalised in order to normalise relations between Kosovo and Serbia, regional initiatives cannot yet be fully realised. These issues cannot be swept under the carpet, and Serbia must face its past before it can work towards a better future. Ignoring them would create more problems down the road and might even complicate the already-volatile and tumultuous dialogue process.

In Skopje, all three presidents addressed the remaining Balkan states that did not partake in the meeting, calling on them to join. Albania’s Edi Rama said that this initiative could not be referred to as a ‘Little Yugoslavia’, labelling those who did as “living in a parallel world.”

However, describing this agreement as an attempt to reestablish Yugoslavia does not originate from the three countries critical of the initiative. It was the Serbian President, Aleksandar Vucic who first described it as “old Yugoslavia, plus Albania.”

And what would Kosovo benefit from this initiative? In the points discussed during the Skopje meeting, there were assurances that free movement of citizens would ease trade, make working abroad easier and allow for recognition of diplomas.

But Serbia’s practice until now has been the total opposite. Serbia has not recognised Kosovo passports, allowing travel only with a national ID card. Serbia also hasn’t recognised Kosovo issued diplomas, which has made it difficult for those of Albanian descent who reside in Serbia to find work, and nearly impossible for any Kosovo citizen to get a work permit.

The Open Balkan initiative cannot be all-inclusive of the Balkans if it does not include all of the states in the region. If anything, it has revealed that it takes a lot more to achieve lasting regional peace in the Balkans, which is ridden with miscellaneous conflicts. With the missing three states still reluctant, it ought to be considered little more than an impractical political gimmick.

Whether the project will contribute to widening regional integration, give the Balkan economy a boost to reach its full potential, despite the many obstacles, remains to be seen.

However, Kosovo should restrict its commitments to those from which it can fully utilise the benefits and realise its own objectives whilst acting free from pressure and always representing itself and its own interests.