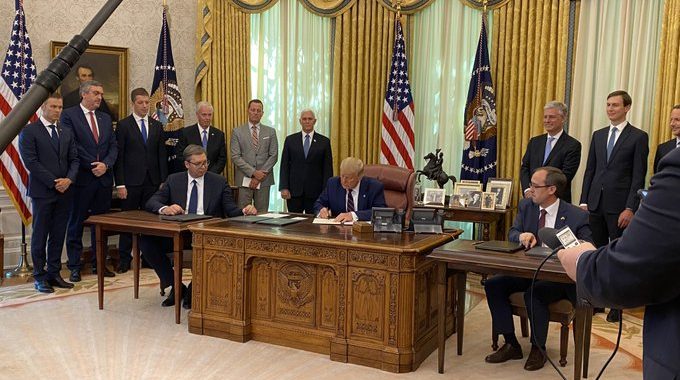 Israel is set to recognise Kosovo as part of an agreement for ‘economic normalisation’ with Serbia signed in Washington DC, while Kosovo has agreed not to seek membership to international organisations for one year.

Serbia and Kosovo have signed separate agreements pledging ‘economic normalisation’ by agreeing to 16 measures under the auspices of US President Donald Trump.*

The measures include mutual recognition between Israel and Kosovo, while Kosovo have agreed to a one-year moratorium on seeking membership in international organisations. In return, Serbia has agreed to halt its de-recognition campaign against Kosovo for one year.

According to the document signed by Kosovo Prime Minister Avdullah Hoti, both parties have promised to implement transport agreements concluded in February by US Special Envoy to Kosovo-Serbia dialogue Richard Grenell. The two states have also agreed to a joint feasibility study on options for linking the Belgrade-Prishtina rail network to a deep sea port in the Adriatic.

A feasibility study has also been pledged in regards to the Ujmani lake. Both parties have agreed to work with the US Department of Energy to explore the possibility of sharing the lake as a reliable water and energy supply.

Before the agreement was signed, former prime minister and AAK leader Ramush Haradinaj criticised a point relating to Lake Ujmani, urging Hoti not to sign and threatening to leave the coalition government over the issue. However, Haradinaj later welcomed the agreement, stating that his concerns were reflected in the signed agreement.

Kosovo and Serbia have also agreed to join the “mini-Schengen Zone” which was announced by Serbia, Albania and North Macedonia in October 2019, and has been opposed by Kosovo in the past.

Both states have also pledged to align with a number of US foreign policy objectives, including designating Hezbollah as a terrorist organisation, and working with 69 countries that criminalise homosexuality to push for decriminalisation.

Kosovo and Serbia are also set to work with US International Development Finance Corporation and the EXIM bank on memorandums of understanding to operationalise a number of projects, including “the Peace Highway.” Meanwhile, expediting efforts to locate and identify the remains of missing persons is listed as a pledge for both states.

Agreements relating to the prohibition of 5G, diversifying the countries’ energy supplies, operationalising the Merdare Common Crossing Point Facility and airport screening make up the rest of the 16-point agreement.

Speaking after the signing ceremony, President Trump described the agreement as a “historic commitment.”

“Serbia and Kosovo have each committed to economic normalization,” Trump said. “After a violent and tragic history and years of failed negotiations, my administration proposed a new way of bridging the divide. By focusing on job creation and economic growth, the two countries were able to reach a real breakthrough on economic cooperation across a broad range of issues.”

Trump added that the agreement also helped bring peace to the Middle East. “Kosovo and Israel have agreed to normalization of ties and the establishment of diplomatic relations,” he said. “Serbia has committed to opening a commercial office in Jerusalem this month and to move its embassy to Jerusalem by July.”

Kosovo President Hashim Thaci saluted the agreement, thanking Grenell and Trump for their leadership in the process.

LDK leader Isa Mustafa also thanked Trump and praised Prime Minister Hoti. “With prudence and commitment, the prime minister and the government managed to make Kosovo a reliable partner of our strategic allies, the US and the EU, in a few weeks,” Mustafa said. “This prime minister and his government deserve support in the journey they have embarked on.”