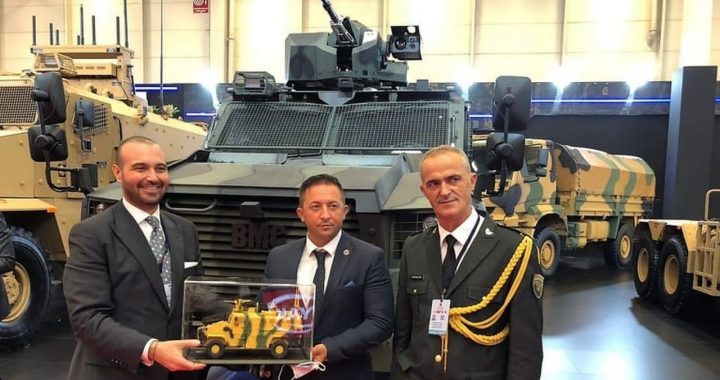 Kosovo Security Force to be equipped with armoured vehicles

Defence Minister says fleet of new US-made ASVs – which BIRN can reveal will be 50 strong – will be an important addition to Kosovo's military capabilities.

A total of 50 armoured vehicles will arrive in Kosovo in the coming days, while some have already been delivered, BIRN can confirm.

Mehaj said via his official Facebook account on Thursday that the lightly armed KSF will soon be equipped with Vuran-type armoured vehicles.

“One of my short-term operational objectives is to strengthen military capacity to conduct defence and international peacekeeping and stability operations,” Mehaj said, adding that the new ASVs “will be a very important system for our military capabilities”.

The vehicles, which have Mk19 grenade launchers, M2 machine guns and M240 machine guns and provide high safety levels for the crew, will be introduced formally at a ceremony at the end of the month.

A senior official who wished to remain anonymous told BIRN the armoured vehicles will be presented by the President, Vjosa Osmani, as commander-in-chief of the army, and by Prime Minister Albin Kurti.

It is still not known whether the vehicles will be paid for out of the state budget or are a donation. BIRN contacted the Ministry of Defence on this but did not receive any response by the time of publication.

Earlier this month, BIRN reported that although NATO does not support Kosovo’s move to upgrade the KSF into a regular army, Kosovo is doing deals with individual NATO member states to reach practically the same goal.

NATO wants the KSF to stick to its original mandate, given in 2009, as an emergency-disaster force, but Kosovo’s parliament voted to update the KSF into an army in December 2018.

NATO continues to maintain its own peacekeeping force in Kosovo, KFOR, a mission that started in June 1999 after 78 days of air strikes forced Serbia to withdraw its police and military from its then province.

The peacekeeping operation has fallen sharply in size from 50,000 troops on the ground 22 years ago to around 3,800 peacekeepers today, coming from 28 contributing nations.