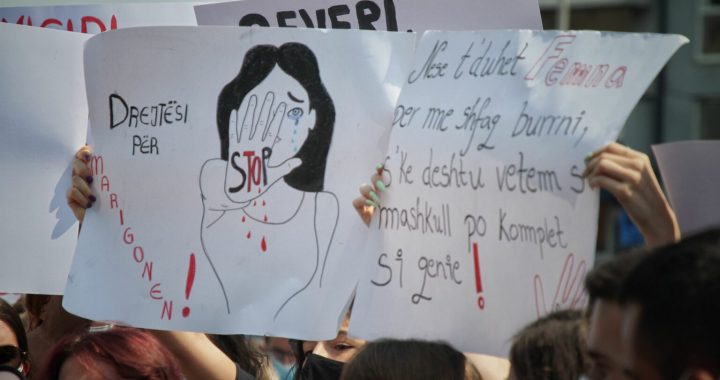 Protesters took to the streets of Ferizaj after the body of an 18-year-old woman, who doctors said died after being assaulted for two days, was left at the local hospital by her suspected assailants.

Dozens of locals and civil society activists protested on Tuesday in Ferizaj after the dead body of an 18-year-old woman was left near the door of the local hospital by two men who then immediately drove away.

“The police have blood on their hands,” the protesters shouted in front of the police station in Ferizaj, while throwing red paint at a policeman. They believe that the authorities have not done enough to prevent violence against women.

Doctors have confirmed that the victim, identified only as M.O., died as the result of physical abuse. The prosecution said that she was physically abused for two consecutive days before she died.

Police confirmed the arrest of Sejdiu on Monday for involvement in a murder. On Tuesday, a court remanded him in custody for a month.

Krivaqa was arrested on Tuesday after police initiated a nationwide manhunt. They said he is the main suspect in the murder.

“There is a well-founded suspicion that on August 22, 2021, around 3pm, in Ramadan Rexhepi Street, in Ferizaj, at the apartment of the suspect D.K., he intentionally and cruelly, for base motives, mistreated the victim,” said the prosecution in its request for a custody remand.

Tuesday’s protest came after several other demonstrations in Kosovo against increased violence against women in May this year. Kosovo police have told BIRN there were 46 reported sexual assault in 2019, 56 in 2020, and 21 up to the end of April 2021.

However, the numbers could be higher as there is still a stigma about reporting domestic violence and sexual assaults to the police in Kosovo.