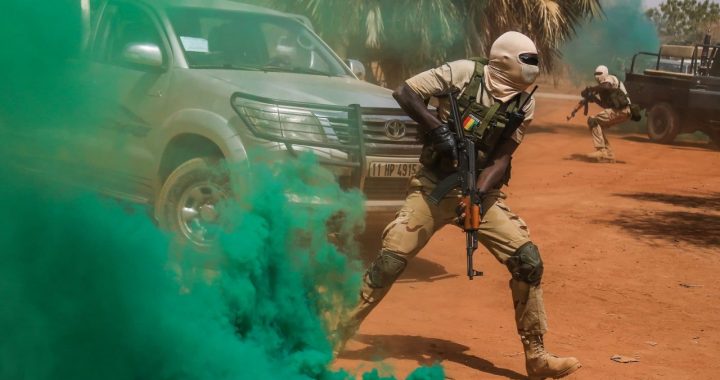 Rights group Amnesty International said that its analysis of video images from the conflict in Africa’s Sahel region identified 12 cases in which fighters were carrying weapons that were recently manufactured by Serbian company Zastava.

Serbian-manufactured weapons were identified in videos and photographs posted on social media by armed groups operating in the Sahel region of Africa, including an Islamic State affiliate which has claimed responsibility for hundreds of civilian deaths, international watchdog Amnesty International said on Tuesday.

They said that the rifles are “some of the latest available models, [and] match trade records of Serbia’s sales to Burkina Faso, suggesting the weapons were recently sold to the government of before falling into the hands of armed groups”.

Amnesty International experts analysed more than 400 pieces of digital content from Burkina Faso and Mali, two of the countries involved in the Sahel conflict, including verified photographs and videos posted on social media by members of various armed groups between January 2018 and May 2021.

“While most of the weapons visible were legacy Kalashnikovs of Soviet origin, many decades old, Amnesty identified 12 cases where fighters carried newer weapons made by Serbian company Zastava,” the rights group claimed.

“These include M02 Coyote heavy machine guns, and M92 and M05 series rifles, including the most up to date M05E3 models which were not available before fighting began in northern Mali in 2011,” it added.

Amnesty International said it was not possible to trace the precise chain of ownership of the arms, but argued that “it is likely that these weapons were diverted to the armed groups either through illicit channels or battlefield capture.”

Serbia has ratified the international, UN-backed Arms Trade Treaty, which prohibits the transfer of arms if there is a risk that they will be used to commit or facilitate human rights violations.

Amnesty International said that the treaty requires states to assess the risk of that such arms being diverted to other forces after being bought, “particularly small arms and light weapons which are easy to conceal and transport.”

“By 2020, when Serbia made its latest reported arms transfer to Burkina Faso, violence between armed groups was already well underway. Any adequate risk assessment by Serbia would have concluded that arms sales to Burkina Faso were likely to contribute to human rights violations,” said Patrick Wilcken, Head of Business, Security and Human Rights at Amnesty International.

“The Serbian weapons we identified are the latest evidence that any arms sold to governments in the Sahel region risk falling into the hands of brutal armed groups, and fuelling the worsening conflict,” Wilcken said.

According to Amnesty International, Czech Republic, France and Slovakia have also “exported large quantities of small arms and light weapons to Sahel governments since widespread conflict broke out”.

Serbian officials have made no public comment on Amnesty International’s findings so far.

The conflict in the Sahel region started in 2012 with a separatist and Islamist insurgency in Mali, then other armed groups emerged and extended the fighting to Burkina Faso and Niger, including groups linked to al-Qaeda and Islamic State.

Weapons made in Serbia have been spotted in several conflict zones in recent years.

In November 2020, bullets manufactured in Serbia were used by the Nigerian authorities in their lethal crackdown on unarmed protesters in the capital Lagos.

Arms manufactured at Serbia’s Krusik factory were used in September 2020 in fighting between Azerbaijan and Armenia over the disputed region of Nagorno-Karabakh.

In June 2020, when Libyan government forces took the capital Tripoli, a Serbian-manufactured shell was found.

Authorities in Iraq also used gas grenades made in Serbia in October 2019 to disperse anti-government protesters in Baghdad, to deadly effect. The Serbian made, 40 mm M99 grenades used in far heavier than the tear gas canisters used by police forces around the world to control civil unrests.

Serbian-made arms were also spotted in Syria in 2016 during the conflict there.